When these couples had to change their plans amid the pandemic, they realized how special their intimate celebrations were, after all. 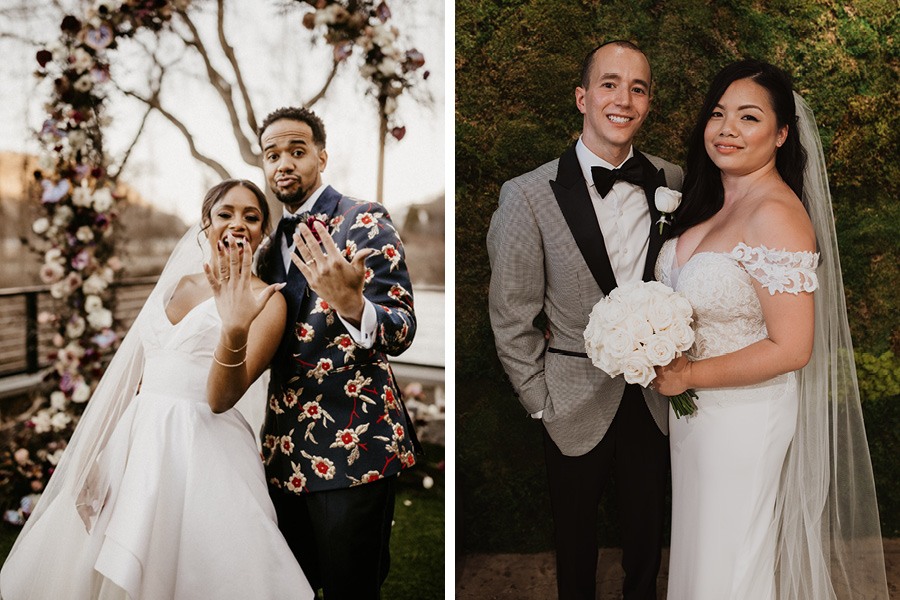 We pay homage to the Philadelphia micro-weddings and elopements of the last two years. Photos by Avonné Photography (left) and Laura Briggs Photo

Over the last two years, the wedding industry has changed — at least for now — as a result of the pandemic. Couples who had to cancel or postpone larger soirees found solace in still being able to celebrate in small ways, as Philadelphia-area micro-weddings and elopements became the parties du jour. Some couples even realized it was all they ultimately needed — and, perhaps, secretly wanted from the start. Sure, we’ll always love large soirees, and we were thrilled that many local duos had the opportunity to party in bigger ways this year, but the Philadelphia micro-weddings and elopements of 2020 and 2021 have also given folks a greater appreciation of the little moments and helped couples realize that it’s more than OK to want a cozier ceremony or reception (or both). Below, we honor some of the couples we covered this year who got married in small ways and loved it — no matter what. 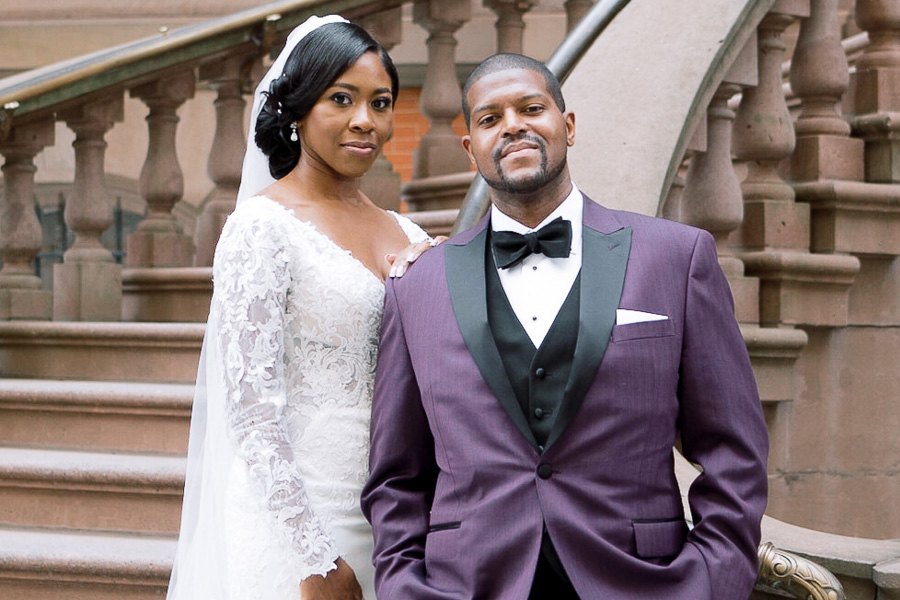 The couple: Brittney Kelsey and Dwayne Johnson
The pivot: A 200-person wedding at the Lakeview Pavilion in Massachusetts in April 2021 became a 40-guest micro-wedding filled with purple and orange hues at The Liberty View on October 10, 2020.
The result: “Everyone was in quarantine due to the lockdown, so the wedding was also like a mini reunion. Our guests kept saying, ‘This was much-needed,’” says Brittney. “We were able to have a great wedding despite the changes. We may plan a big anniversary down the line.” Read more here. 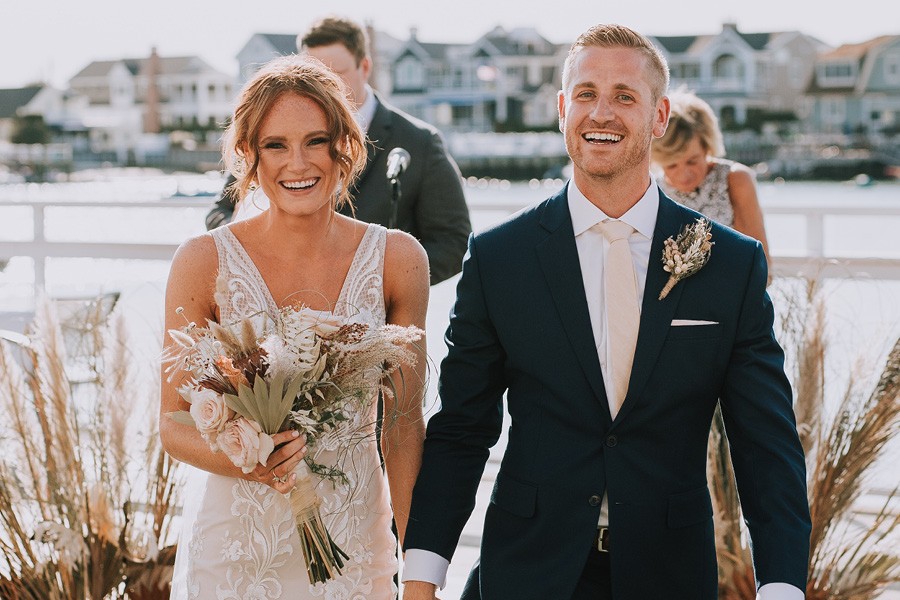 The couple: Erika Hineman and Michael Stobbe
The pivot: A 180-person celebration at the Reeds at Shelter Haven in June 2020 became a 59-guest micro-wedding with a California-desert-meets-Jersey-Shore theme at the same location on September 6, 2020.
The result: Because Michael’s mother had been diagnosed with an aggressive form of brain cancer, the couple was determined to keep that second date. “It was important for us to move forward with the wedding in whatever way, shape or form,” says Erika. When asked if they’ll hold a larger soiree in the future, the couple says no. “It was important to us to celebrate the moment fully, no matter what that moment looked like!” Read more here. 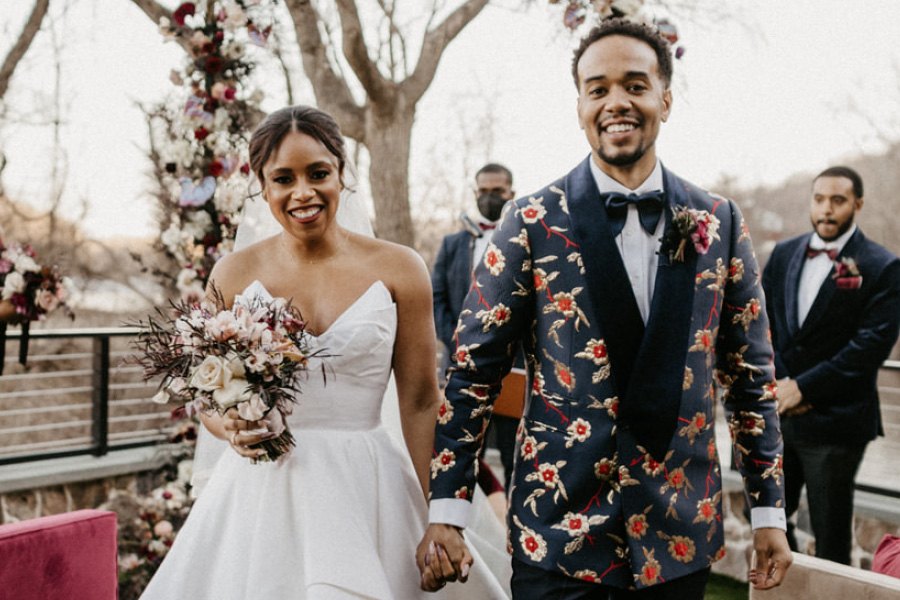 The couple: Jewel Lester and Ameer Sherard
The pivot: A 175-person fete at Front & Palmer in October 2021 ultimately became a 24-guest moody, glam micro-wedding at River House at Odette’s on March 13, 2021.
The result: The couple faced a number of challenges that led them to March 2021, including the passing of Jewel’s grandmother before the original wedding date and Ameer testing positive for COVID a week before the fourth change of plans. But for Jewel and Ameer, when they finally said “I do,” their party was a dream. “Our micro-wedding was perfect and our live stream had over 200 people,” says Jewel. “We feel like we had a great time, and the wedding was so well done that we don’t think we need a larger celebration down the line.” Read more here.

The Wildflower- and Ice-Cream-Filled Backyard Wedding of Summer Dreams 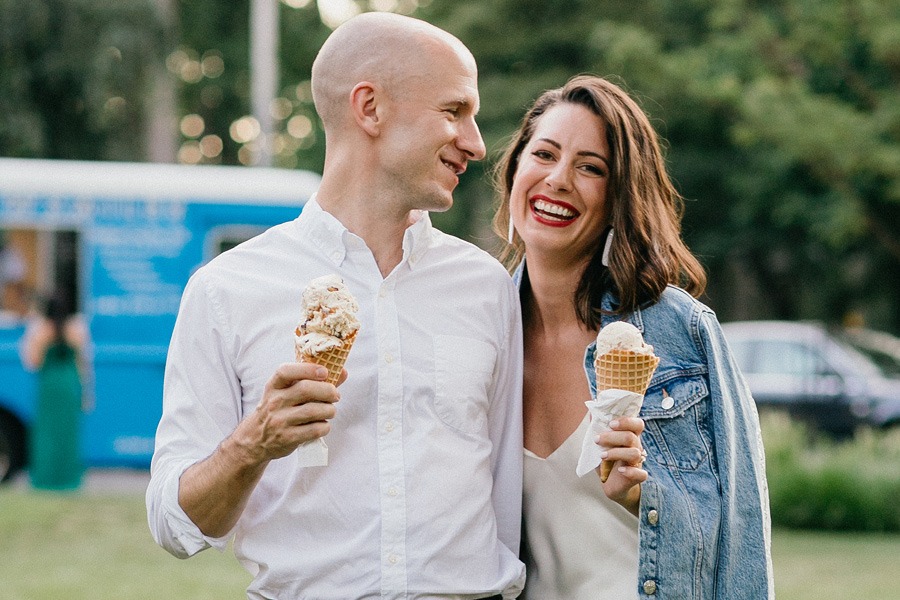 The couple: Daisy Carter and Andrew Berta
The pivot: A 215-person ceremony at St. Francis Xavier Church and reception at the Kimmel Center in May 2020 became a family-only ceremony at the same church and 45-guest wildflower-filled tented reception at the bride’s parents’ backyard in Malvern on July 25, 2020.
The result: Daisy admits that making it through their original date — without a wedding — was difficult, but the couple found a way to honor it. She baked her own cake from scratch, and she and Andrew staged the night that would’ve been. She wore a veil (a piece of gauze on a headband) and a white dress. They had dinner, a first dance and cut the cake. As for the actual Big Day? It exceeded their original plan, they say: “Our wedding was everything we ever hoped for,” says Daisy. “It was more intimate and full of our favorite people, so we don’t feel like we need to have another larger celebration. The virus has taught us that what matters most is family and close friends.” Read more here. 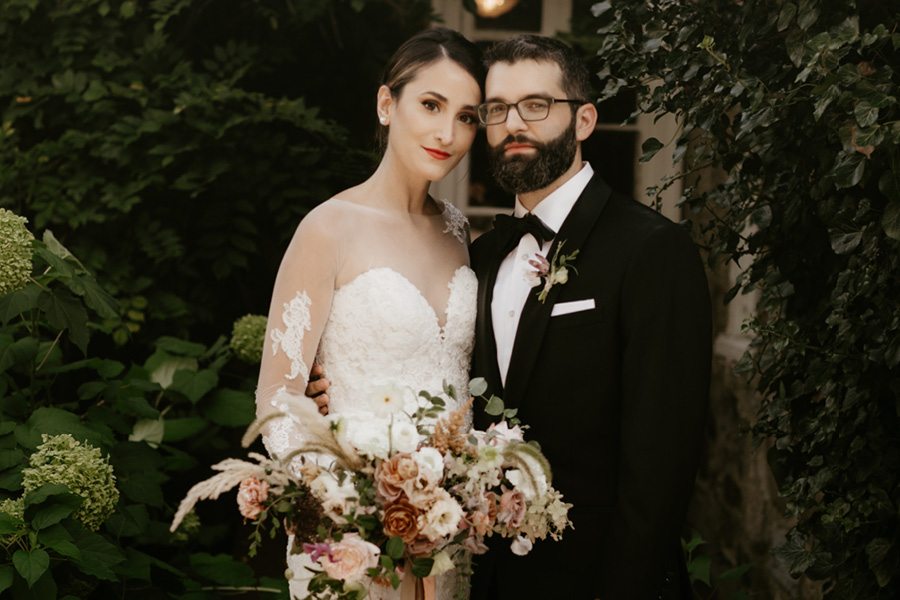 The couple: Lara Aqel and Carlos Valdes-Lora
The pivot: A 220-person wedding at Park Château Estate & Gardens in March 2020 became a 32-guest “moody secret-garden party” at the Inn at Barley Sheaf Farm on August 8, 2020.
The result: After nearly six years together, Lara and Carlos just wanted to be husband and wife, and they say the pandemic further strengthened their reasons for getting engaged in the first place. “It helped us focus on the meaning of the commitment we were making,” says the bride. Their union was held entirely outdoors, from the courtyard ceremony to the tented reception attended by the people with whom they were closest. “We are personally not planning a larger celebration,” says Lara. “For us, our micro-wedding day felt very full. We are so grateful to have those special moments.” Read more here. 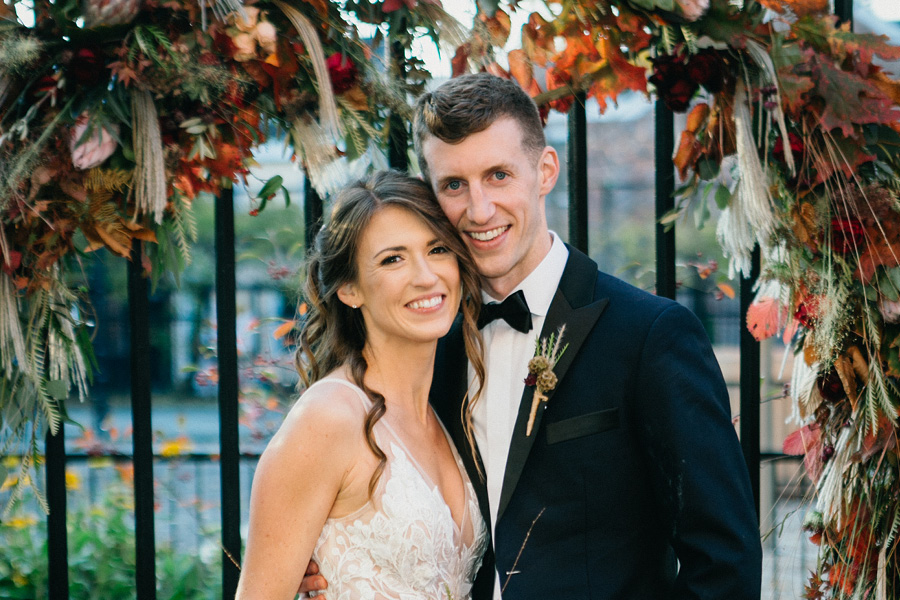 The couple: Alicia Mucci and Kevin Montminy
The pivot: A 150-person wedding and ceremony at John James Audubon Center became a 25-guest fall in Philly-themed block party in front of the couple’s rowhome on the original date, November 13, 2020.
The result: The couple says they saw the writing on the wall in May and, rather than put up with all the stress, they shifted their plans to a setting that allowed them not only to celebrate their relationship but also the city they love, particularly in autumn. Even better:  They could celebrate with the people who matter most — at the couple’s first home. “The changes we were forced to make allowed us to create the perfect little intimate gathering we didn’t realize we may have wanted all along.” Read more here. 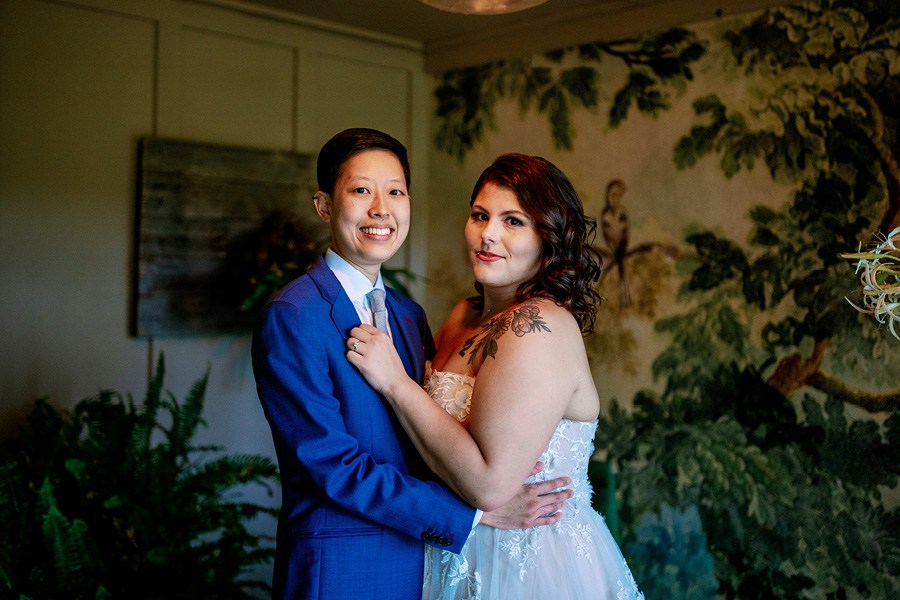 The couple: Jinny Park and Alexandria (a.k.a. Xand) Griffin
The pivot: A 20-person ceremony at Promise Ridge with a 50-person reception to follow at Renegade Winery became an eight-guest woodland-inspired elopement with a small gathering to follow at the couple’s hotel, Good Dog Vacations at Big Valley Resort, on the original date, June 25, 2020.
The result: While their wedding was already modestly sized, the duo limited it even more to protect their loved ones. The only folks in attendance were their friends and family who also stayed with them at their lodgings following the ceremony — along with Jinny’s dog Stout, who passed away a few months after the wedding. (“I’m so glad we went with a place that was both beautiful and dog-friendly,” says Jinny.) While the couple initially thought they’d hold their reception in June 2021, they decided against it. Says Xand: “We had such an incredibly lovely time with our small wedding that we ultimately decided that we didn’t need it.” Read more here. 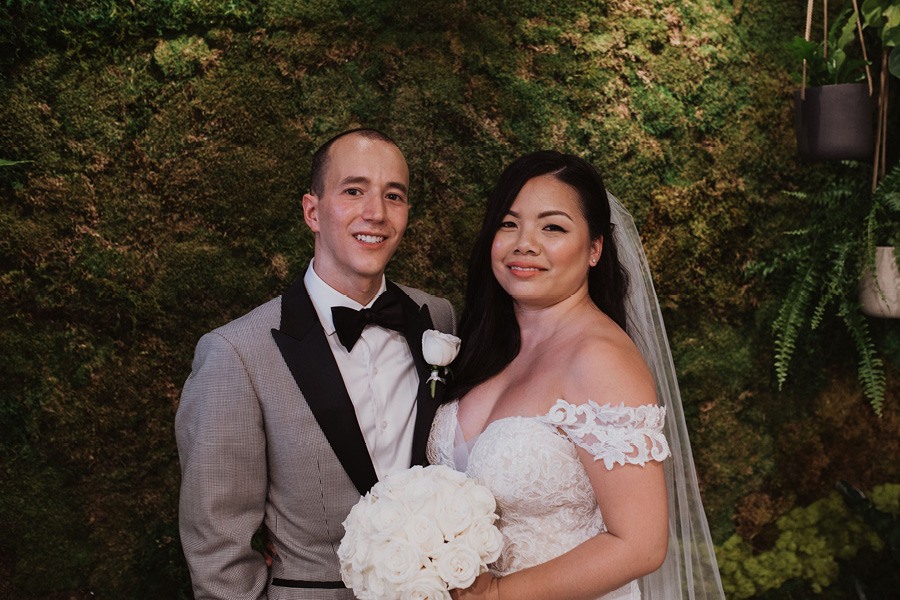 The couple: Anh Pham and Francesco Storniolo
The pivot: A 40-person micro-wedding at Bespoke Home + Life became an even-cozier 35-guest modern and minimal brunch at the same venue and on the original date, July 19, 2020.
The result: For this couple, it was always about having an intimate celebration with their closest friends and family, going on a honeymoon and starting a family. “We didn’t want to break the bank for a lavish day,” says Anh. “It’s not us.” So when a few out-of-state guests couldn’t ultimately make it, they told them it was OK. “When we get to see each other again, we can celebrate. It’s like one very long party.” The couple chose not to stream the day either, choosing instead to focus on the experience itself. “We had our dream wedding,” they say. Read more here. 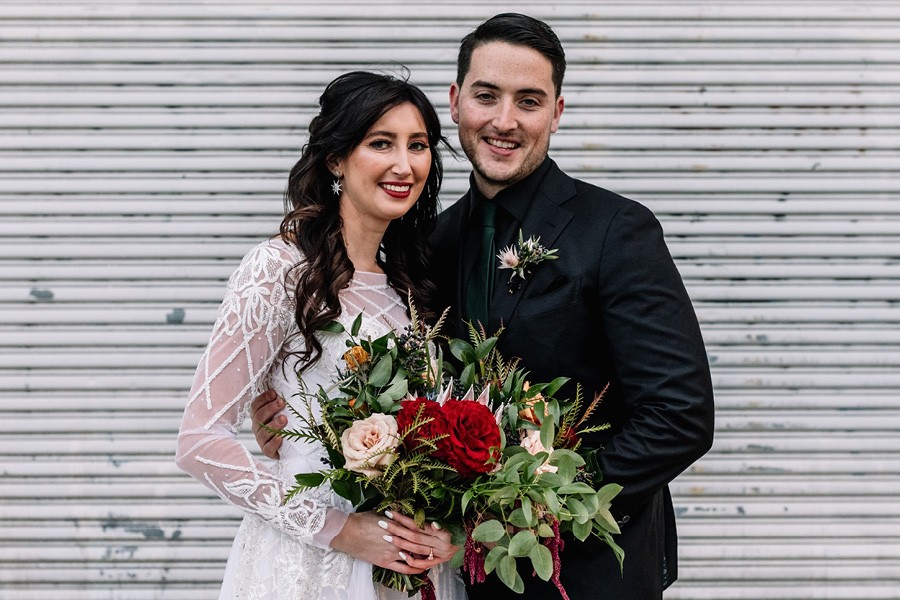 The couple: Kelly Wilson and Greg Nealis
The pivot: A 170-person wedding on November 21, 2020 at FAME became a 20-person Philadelphia micro-wedding with an enchanting theme — the bride wanted the decor to feel like it was pulled from a witch’s house – on November 19, 2020 at the same venue.
The result: The couple decided to truncate their guest list over the summer as the pandemic progressed. But Kelly had secretly always wanted a more intimate wedding. “When Greg suggested cutting to the wedding party and parents, I was thrilled he felt the same way,” says Kelly. “We shook on it and never looked back.” The wedding date was a bigger issue — shortly before the Big Day, the city announced new guidelines that prevented indoor events. So the couple and their vendors had to push everything up two days, and replan everything in a period of 72 hours. Other than a bit of a cake snafu, the Big Day went off without a hitch. As for the future? The couple is considering a five-year anniversary party to toast not only their marriage but also their 10-year relationship — and many years to come. Read more here.

The Deacon Hotel Micro-Wedding Where Everyone Wore White 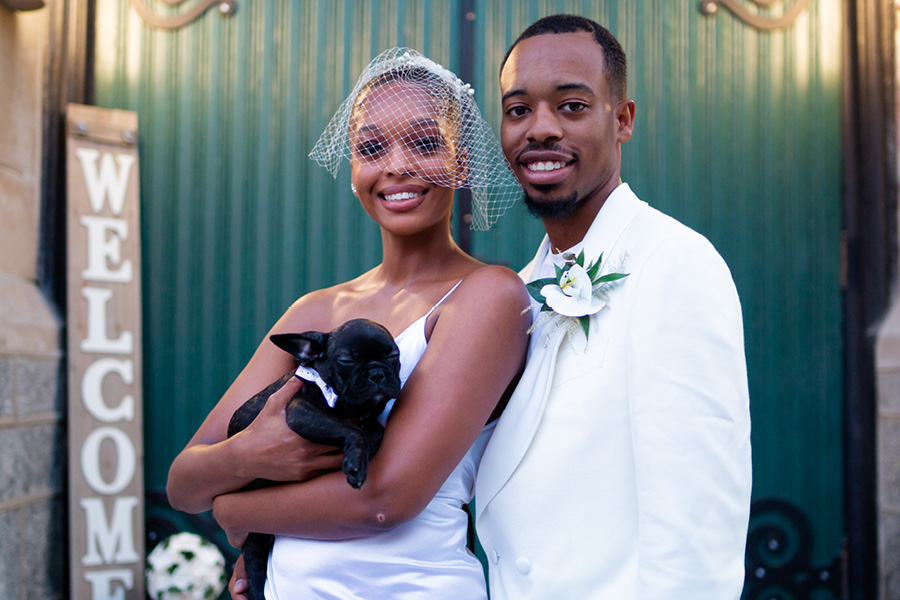 The couple: She’Neil Johnson and Zachary Spence Jr.
The pivot: A 200-person wedding at Long View Gallery in Washington, D.C., became a 14-guest all white-themed gathering at the Deacon hotel on the original day, August 22, 2020.
The result: The couple postponed their large soiree till September 2021 and initially decided to do a small family gathering at an Airbnb — but two days beforehand, there was a glitch in the system and their reservation was canceled. Luckily, a friend who knew the owners of The Deacon made a call on the couple’s behalf and found that the hotel could accommodate the wedding and an overnight stay for their family. “Everything truly happens for a reason,” says She’Neil. “As Zack and I look back we wouldn’t want our wedding to happen any other way — a small, intimate moment in time with our loved ones.” Read more here. 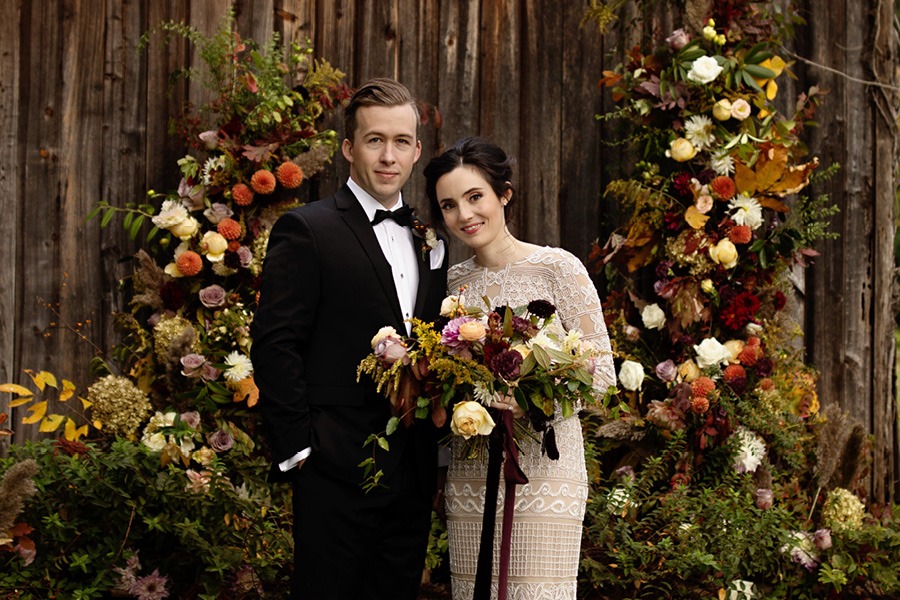 The couple: Kendra Linton and Dylan Wadell
The pivot: An 80-person Terrain Gardens at Devon Yard wedding in June 2020 became a 35-guest black-tie bohemian (and totally gorgeous) fall micro-wedding at Kendra’s childhood home in Thornton on October 18, 2020.
The result: Originally, the pair had postponed their wedding till December, but realized COVID wouldn’t be gone by then. (Sigh.) But they embraced their unique-to-their-relationship, at-home approach: “We wanted our day to have moments that felt intimate and personal, telling our story as well as the story of our family,” Kendra says. The new venue allowed them to run wild (in a good way) with their fall decor and heritage touches. “We are so happy to be married,” she adds. “We felt that our wedding was a celebration of who we are and of our families coming together, which, in these times, felt more important than ever.” Read more here.