And they have some interesting theories about why Larry Krasner's office charged said fan with felonies. 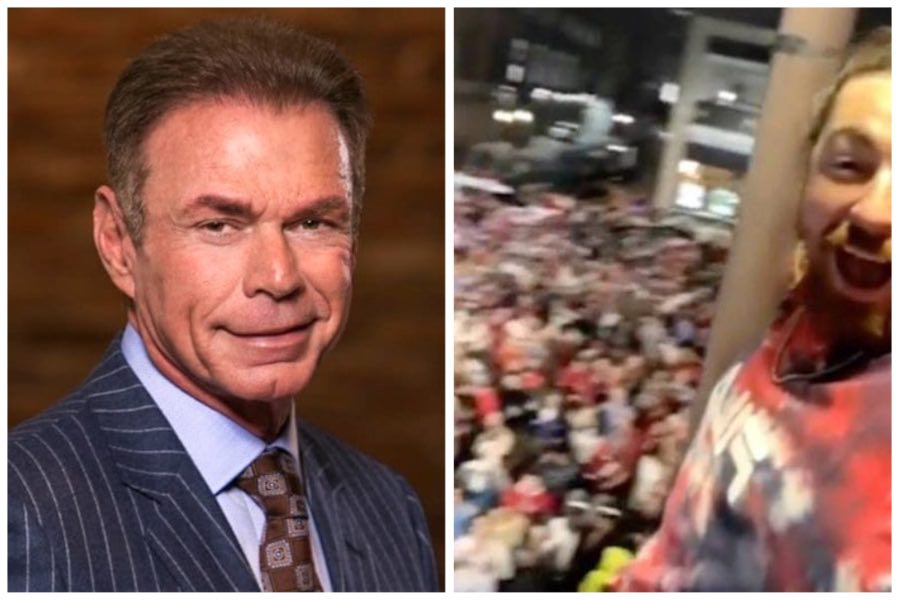 “They’re going to send him to jail for climbing a pole?” Peruto, who memorably ran as a Republican against District Attorney Larry Krasner in the last election, told me earlier this week. “I think not.”

You may remember that police arrested Hagan late in October after he climbed a pole on Broad Street following the Phillies win that sent them to the World Series. Krasner’s office charged 29-year-old Hagan with felony rioting and conspiracy, along with misdemeanors and summary offenses. A judge released Hagan on $100,000 unsecured bail. The Philadelphia Police Department confirms that Hagan was the only reveler hit with felonies.

If that all sounds like a bit much to you, well … Hagan and Peruto have theories.

According to court documents, Hagan’s social media posts from the Phillies celebration played a prominent role in the police investigation of him. And, as anybody who would look through Hagan’s entire social media presence would know, he is a proud and unabashed Donald Trump supporter. Not just a supporter: Hagan marched in Washington D.C. on January 6th in support of the effort to overturn the election. He insists he didn’t go into the Capitol or do anything illegal, explaining to Philly Mag: “I may have gone inside, but I had my father with me. And there’s no way my father was going to let me do that. Had I been alone, maybe a different story.”

Hagan believes that Krasner’s office is throwing the book at him because of his alignment with the MAGA movement and his presence in D.C. on January 6th. “They’re politicizing my case,” he claims.

I asked Larry Krasner spokesperson Jane Roh to weigh in on this theory. Her not-exactly-clear response, quoting the Inquirer quoting her: “Per the Philadelphia Inquirer: ‘On Wednesday, police submitted an affidavit for his arrest charging him with riot, conspiracy, public drunkenness, disorderly conduct, and failure to disperse, which was approved by the District Attorney’s Office, said D.A. spokesperson Jane Roh.'”

Hagan’s preliminary hearing in the case is scheduled for November 15th. He started a GoFundMe for his legal defense that is up to $1,774. Not exactly Peruto money, but … something tells me Peruto isn’t in this one for the cash.

Maybe that Debate Didn’t Hurt Fetterman So Much After All

With the election mere days away, an interesting poll from Monmouth University concludes that the “Senate debate show[ed] little impact” and that “few reconsider[ed] support” of Fetterman after the debate.

Kenyatta Johnson Gets Back to Work

A jury has acquitted Philadelphia City Councilmember Kenyatta Johnson of corruption charges. Again. His wife is in the clear, too.

The Benefits of Bikeshare

The presence of Indego bikeshare in Philadelphia has led to an overall increase in residents’ physical activity, suggests new Drexel University research.

Legislators in Harrisburg just paved the way for autonomous vehicles.

And from the Unhappy-Camper Sports Desk …

Last night was not a happy night in Philly sports land. The high-riding Phillies whiffed their way to only the second no-hitter in World Series history to the Astros. You don’t want the ugly play-by-play. Ace starter Aaron Nola and ace reliever Jose Alvarado got knocked around good in the fifth, and the Phils never got back on their pheet. Astros starter Cristian Javier was close to perfection through six innings, and the bullpen came through for the rest. Final score: 5-0. Series tied 2-2. So much for that unbeaten CBP post-season record.

We can try to hold onto our sense of humor, though, right? Before the start, one fan really took the New York Post’s “Phillies fans are the worst fans” story to heart.

Then there was Mattress Mack, ace Astros fan, taking umbrage after Tuesday’s game at a Phillies fan.

Mattress Mack is a gangster. Astros in 6 pic.twitter.com/bqsMZjaLqs

But wait! We’re not all about hate; there’s this lovely Phillies post-season love story, too.

Some Phils fans seem to be getting religion:

Scientists at Princeton University have reconstructed this 3D model of how Jesus, son of god, might have looked. pic.twitter.com/zmS4qvRMHM

The Inky’s Matt Breen did a stylin’ job of pinning down the blowout on Brandon Marsh’s hair.

And hey, did you know Alec Bohm’s homer on Tuesday was the 1,000th in World Series history?

In other unhappy news, the Sixers played the Wizards — again — at the Wells Fargo Center last night. Neither Joel Embiid (illness) nor De’Anthony Melton (knee injury) was available for the game, which wasn’t exactly a sterling display of talent. At the close of the first quarter, with shots not falling for them, the Sixers were down  31-25. They pulled back to trail 57-51 at halftime after a run late in the second quarter, and Tyrese Maxey closed it to one point a few minutes into the third with a 7-0 run. The Sixers hung around for the rest of that quarter, with Shake Milton nailing an impossible three right at the buzzer for a 91-91 tie. It was time to head over to the Phils … but the final quarter for the Sixers wasn’t happy, either.

So what’s next? Chances are you, like so many Philadelphians, are trying to decide what sporting event to watch tonight. In our household, we operate on the Hingston Rarity Theory, which states: In a regular-season toss-up between a Sixers game and a Phils game, we watch the Sixers, because they have an 82-game schedule and the Phillies play twice that many. If the Phils or the Sixers are playing at the same time as the Eagles, we watch the Eagles, because there are only 17 games in the NFL season. But a World Series game is a more unusual event than an Eagles game — even an Eagles game when the team is riding high at 7-0. Right? Hmm. Or maybe not. It’s not easy to decide on this one. Thank God for the remote control.

The Flyers also played. And lost.