Plus, people are trying to sell Phillies home World Series tickets for as much as $13,500 each. 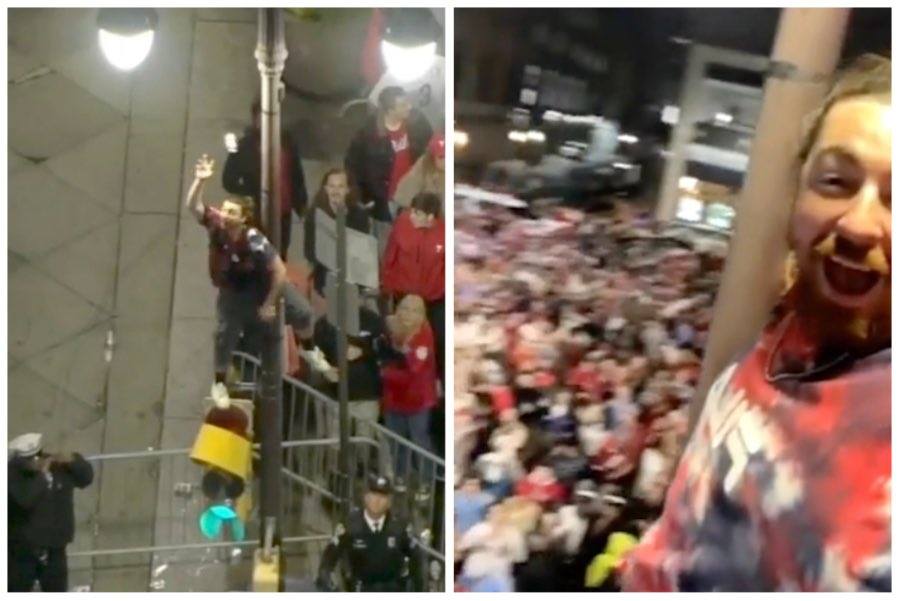 Phillies fan Sean Hagan, who has been arrested for climbing poles after he learned the Phillies were headed to the World Series (images courtesy 6ABC)

Phillies Celebrating Could Turn Costly for One Philadelphia Man

As you know doubt remember, the city went bonkers when we all realized that the Phillies were headed to the World Series. Phillies fans filled the streets, chugged beers. It was generally one big party. And, yes, some Phillies fans also managed to climb poles, despite the city’s best efforts to stop that from happening by greasing the poles.

Well, it didn’t turn out so well for one such fan. Police have charged 29-year-old pole climber Sean Hagan. Police arrested Hagan on Wednesday. He’s been charged with criminal mischief, rioting, conspiracy, failure to disperse, disorderly conduct, and public drunkenness.

On Thursday, the court released Hagan on $100,000 bail. A judge set a preliminary hearing for November 15th, by which time the Phillies will have been named World Series champs, right?

I wasn’t able to reach Hagan — and there’s no attorney of record listed on his case as yet. But 6ABC did catch up with Hagan who said, “Going forward, I would recommend people not to do it.”

Yeah, good luck with that.

One city source I spoke with on the condition of anonymity said the city is simply trying to send a message with Hagan’s arrest. “There’s no way the kid ever does a day in jail,” the source insists.

Hmmm … maybe as community service, he can clean up all the urine, beer, puke and such off of Broad Street after we win this thing.

So What Does a $13,500 Phillies World Series Ticket Get You?

The World Series begins on Friday night in Houston before traveling to Philadelphia, by which time the Phillies will hopefully be up 2-0 after their Friday and Saturday night games down yonder. Then it’s Monday, Tuesday and (if necessary) Wednesday at Citizens Bank Park in Philadelphia.

Getting tickets to the Phillies home World Series games through the normal Major League Baseball channels isn’t an option, unless you’ve already registered for the opportunity to purchase tickets, which is, by no means, a guarantee. That registration ended on Tuesday and “winners” will be notified on Saturday of any Phillies World Series tickets that become available.

But if you definitely want to go to a Phillies World Series game, there are, of course, options. You can mess around with Craigslist and Facebook Marketplace all you want. When I buy third-party, I go with StubHub. So I decided to see where the StubHub market stands on Phillies World Series tickets.

Note that this market fluctuates all the time. Prices will go up. Prices will go down. Some of this will depend on how the series goes in Houston. Other factors can include the weather which, thus far, doesn’t look to be a problem in Philadelphia. (And, actually, sunny and a high of 68 for Wednesday, which would be game five, seems like perfect baseball weather.)

Those Diamond Club tickets are right behind home plate. If you’re willing to veer off a little to the left or right in the Diamond Club, you can save a few bucks. Tickets to the less prime (I guess?) Diamond Club positions average out about $9,500 each on StubHub.

We’ll be tracking third-party prices over the weekend and will report back on Monday to see how it’s going.

Used to Be a Phillies Fan

This guy who used to be a Phillies fan is betting $10 million — yes, $10 million — on the Astros. If he wins, it could be one of the largest payouts in sports betting history, reports 6ABC.

If You Spot a Motorcade …

It’s just President Joe Biden and Vice President Kamala Harris, who are visiting Philadelphia on Friday evening to make keynote remarks at a big Democratic Party fundraising dinner. We’re assuming they know they need to wrap it up by 8:03 p.m. — kickoff time, as we sports-oblivious journalists like to say — for the Phillies-Astros game.

We all know there are far too many illegal guns on the streets of Philadelphia, and no reasonable person could argue that this isn’t a major factor in our homicide problem. That’s why it is so shocking to learn that a deputy sheriff in Philadelphia has been charged by the feds with selling illegal guns on the streets. Shameful. Making it worse is that two of the guns in question had allegedly been used in that tragic after-school shooting in Roxborough.

And from the Really-Getting-Antsy Sports Desk …

What was it that Tom Petty and the Heartbreakers used to sing? Oh yeah: The waiting really is the hardest part. Luckily, my talented colleague Laura Swartz created an incredibly comprehensive World Series guide for you to peruse in the tedious windup to the first pitch tonight in Game 1, at 8:03. All around our fair city, folks are finding ways of passing the time. At City Hall, Councilmembers were whipping their rally towels.

Philly City Council rooting on the Phils the day before Game 1 of the World Series in Houston.

Council Prez ⁦@Darrell_Clarke⁩ calls for a special order of business” for members to wave rally towels.

Clarke: “They better not let us down.” pic.twitter.com/ne9pwNWP4y

Hometown Philly funk band Snacktime was polishing up its instrumental version of unofficial team anthem “Dancing On My Own.” (Read about Snacktime’s genesis here.)

SNACKTIME – "Dancing On My Own" (live at WXPN Studios) https://t.co/w7d3sJ37ga via @YouTube

The Wall Street Journal weighed in on the now-widespread theory that a Phils World Series win could tank the economy, noting that once upon a time, the Astros’ Orange Juice Park was known as (gulp) Enron Field, much to the team’s chagrin.

Way too much ink and airtime is getting spent discussing Angelo Cataldi’s replacements at WIP, but you go ahead and check it out if that’s your thing. Or you can kill some time with this New York Times profile of Rhys Hoskins gettin’ knocked down but gettin’ up again. Just make sure you’re all settled in wherever you plan to be for Game 1 at precisely (why?!?!) 8:03. And in your excited anticipation, don’t forget: The Sixers play the Raptors, in Toronto AGAIN, at 7:30 tonight, then face the Bulls in Chicago on Saturday at 8. Temple football faces Navy in Annapolis at 3:30 Saturday. The Eagles play the Steelers at home in the Linc at one o’clock on Sunday. And the Union play New York City FC in the Eastern Conference Final Sunday night at Subaru Park at 8. There. Have a weekend, y’all!

All Sports Desk coverage is provided by Sandy Hingston