Phillies Fever Shows Just How Thirsty This City Was for Joy

I wasn't even following baseball, but I love how happy the World Series run has made my fellow Philadelphians. How can we make the feeling last? 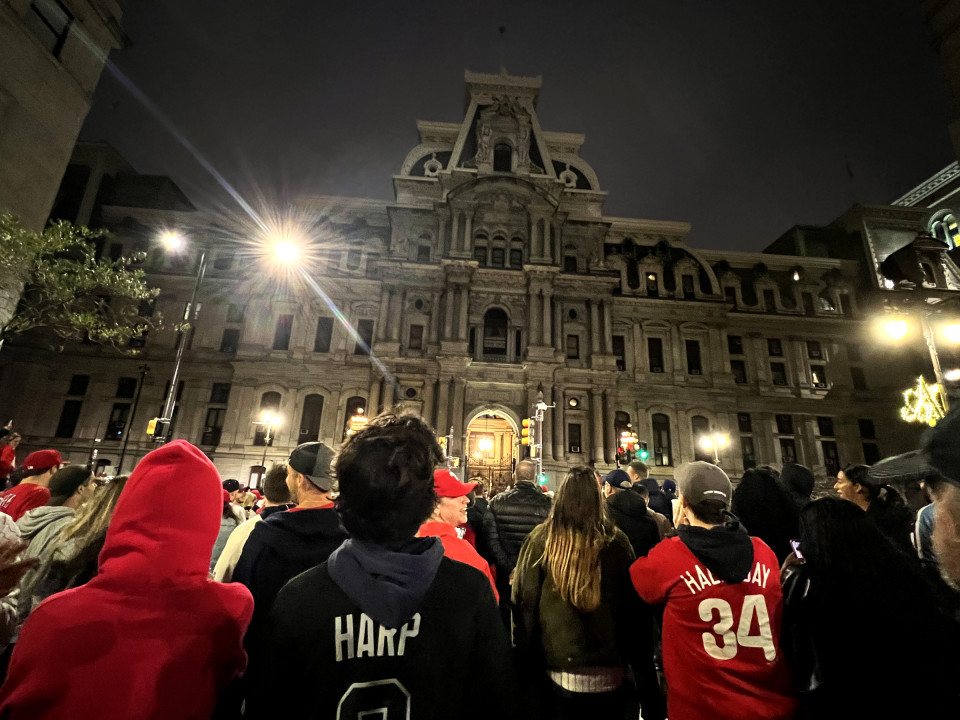 The peal of cowbells, hollers and chanting, people racing down my Fairmount block on Sunday — it could all mean only one thing: Some Philly team had won something big.

I don’t pay attention to the NFL anymore, so at first I assumed we must have beaten the Cowboys. The Sixers wouldn’t elicit such joy, because the season’s too young (plus they’ve been too bad). And that’s when I remembered the Phillies had been playing in the post-season for the past several days — a fact that became even more obvious when I looked out my window and saw people clad in bright-red Phillies gear ripping up and down the sidewalk and crashing into each other like bumper cars, clapping each other on the back.

Kids in Phillies jerseys or the trademark baseball cap yelled and danced across from my apartment building. A few doors down, a house whose inhabitants always watch Eagles and Phillies games on an outdoor monitor fixed against a wall had about a dozen people clapping beers together under an outdoor tent. As traffic made its way down Parrish Street, cars and fans honked at each other. Toot-toot-toot rapid-fired each time a driver passed down the street. The four-block radius around me sounded like an arena.

For a couple of hours Sunday night, it seemed like we became a tribe with a three-word vocabulary: “Phillies” and “World Series” became “I am Groot,” a malleable-meaning mantra going into Monday. On my way down Fairmount Avenue, I passed area taverns and bars where gobs of people stood on corners, leaning against each other, shouting excitedly and sharing beers.

About five people high-fived me; two offered me a drink; probably seven jumped suddenly in front of me to yell “WORLD SERIES, BABY!” It’s amazing how thirsty this city has been for joy, and how with the flick of a win, a twitch of Bryce Harper’s wrists, parts of the city hummed again in a way they hadn’t in eons.

I scrolled my phone, sifting through endless Twitter videos of discrete pockets of Philadelphians in various states of joy. I watched footage of a North Philly crowd playing a makeshift baseball game in the street; the clip ended with a kid batter sending a dramatic pitch sailing high into the air before falling into the sea of people. I watched South Philadelphia before-and-after moments: silence and then celebration once the World Series berth was official. In another South Philly clip, an impromptu parade broke out as people milled about with their arms slung over each other’s shoulders and the occasional stranger leaned into the camera phone to shout and cheer.

Inevitably, I saw the gob of people that gummed Broad Street: men scaling poles, erratic behavior in the middle of the road, a fan guzzling beer from his sneaker like an urban Viking, a woman in black pants dropping into a sudden split. Each feat was met with an eruption of cheer and the sort of unbridled applause that reminded me, as it did many, of 2008, when a similar group of people descended on Broad Street, ultimately bashing in storefronts, dancing on cars, and hoisting each other up poles.

The fact that people reacted this way to a World Series berth showed just how desperate times have been in Philadelphia in the past several years. I thought about how much Broad Street has changed since 2008; now, our mayor openly muses about the day he’s no longer doing the job, while half our City Councilmembers see themselves as his replacement. In recent years, the pandemic created at least three reasons to take to Broad Street’s corridor: the racial strife of 2020, the election of President Biden, and the dismantling of Roe v. Wade. The city’s problems are well documented, and a nigh-unspoken fear of recession hangs over us. Finding joy in this city has been like searching for that needle in the haystack.

How close are we to joy now? I’ve been wondering this since Sunday night’s win. I love Philadelphia and find that even in these joyous outpourings, there’s still division in our happiness. Many of us might be home fans without necessarily being home-team fans. Last Sunday, even though I joined with everyone else in the Phillies euphoria, that dopamine rush eventually receded. In these moments, I can’t help but think about how Broad Street is a culturally bifurcated strip when it comes to such celebrations: Would such a gathering of the Sixers fan base, for instance, be received differently? I think in these moments that some Philadelphians are emotionally cajoled into being happy for Philadelphia without feeling anything for the Phillies; you end up holding a confluence of emotions at once. I think these are times when people on the fringe of these moments look for reasons to feel a part of the collective joy. I couldn’t name a single Phillies player for you (other than Bryce Harper, of course), but God if I don’t love this city. And even if just for a night, it felt irresistible to suspend all the other things I know about living here to literally touch some of that joy with my neighbors.

Yet for every neighborhood video and street-pole top that seemed emblematic of a collective joy, there were neighborhoods that stayed completely quiet Sunday night. Baseball is a sport that’s had a decreasing number of Black players, and some Philadelphians accessed a momentary city pride separate from any specific affiliation with the team or the league. The World Series will hopefully give a chance for us to extend goodwill in the city for at least another couple weeks, but in the moments after, win or lose, the inevitable post-World Series Monday — whether it culminates in a parade or a wait till next year — means we still need to find ways to celebrate our city and each other, even as the world become increasingly bleak and barren again. Right now, the city’s signature brand — the underdog — is encapsulated by this surprising Phillies run. As is ever the case, Philly finds itself in the role of the upstart, a lovingly boorish place that people love to count out and count on for being gritty, determined, and eager to play by our own rules.

Now seems like an important time for the city to remember this and try to find our way back to some level of love and prominence that shouldn’t rise or fall with a sports season. There’s never a day that Philadelphians don’t need each other, so whether it’s via the upcoming midterms, volunteering somewhere, or being less anonymous on your block, the chance to clap hands and backs with people, to meaningfully connect and contribute, is always closer than you think.

Over the past couple days, I’ve watched replays of Bryce Harper hitting the pivotal home run that helped seal our series win. On the third viewing, I watched the ball sail into a crowd of fans that looked indistinguishable from the ones I saw later that night on social media. As the ball disappeared into the maw of hats and faces, it reminded me that when these moments are over, when the season’s done, Philadelphia’s joy will still be in our own hands.

Tre Johnson is a writer whose work has appeared in Phillymag.com, Rolling Stone, the Washington Post, Vanity Fair and more. His first book, Black Genius, will be published by Dutton in 2023.