Plus, Kenney's gun ban thwarted, the Atlantic goes for Mastriano's jugular, and more of what the city is talking about right now. 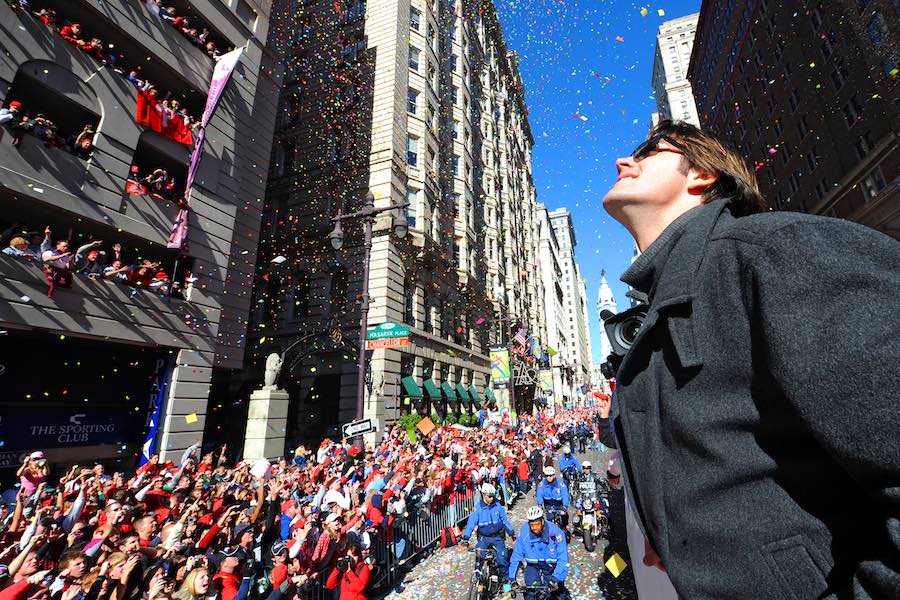 I’ll let my colleague Sandy Hingston fill you in on all the Phillies (and other sports) news you need, as she masterfully does every morning at the bottom of each edition of Philly Today. But now that the Phillies are looking like they have a real shot at this thing, it’s easy for us to think back to 2008 when the city was absolutely blissful after the Phillies won the World Series. And then back to 1980, when the Phillies won the World Series against the Royals, as about 66,000 people watched the final matchup (game six) from their seats in Veterans Stadium.

Alas, the witty finance-focused outlet Morning Brew may have a reason why this Phillies World Series business could be bad for the country. Nay, the entire world.

Over the past 100 years, the surest sign of an oncoming financial crisis has been a Philadelphia based baseball team winning the World Series:

I’ll save you the trouble of reading the many replies to the Morning Brew tweet. Basically, they boil down to one of two things. Either the Phillies are definitely going to win the World Series because Joe Biden has ensured our economic destruction. Or we have absolutely nothing to worry about economically speaking because how could this flawed Phillies team even get to the World Series?

So Much for Kenney’s Gun Ban

When I told you about the Kenney gun ban a week ago today, I half-joked that gun rights groups probably already had a lawsuit drawn up to strike it down in court.

Well, it turns out that the very same day I issued that report, gun rights activists filed a lawsuit in Philadelphia’s Common Pleas Court. They also requested an injunction against the city, demanding that Philadelphia immediately put an end to said gun ban. The suit argued that state law says that cities can’t just make up laws restricting the carrying or use of guns that state law deems legal.

On Monday, a Philadelphia judge issued a permanent injunction against the city, essentially banning the ban. The city has said it is disappointed in and reviewing the judge’s decision and considering next steps.

An alarming one from Fox News: “Philadelphia Reaches 1,000 Carjackings for First Time Ever”

Remember the gas station GoFundMe scam? The one where a woman said that a homeless man (that’s Bobbitt) gave her his last $20 when she ran out of gas in Philadelphia in 2017. And then the woman and her boyfriend launched a GoFundMe to raise money for Bobbitt. And then good people all over the country donated more than $400,000 in life-changing money. Everybody felt great, on top of the world, a real high for humanity. And then it all came crumbling down when we learned that the whole thing was one giant hoax. Yeah, that GoFundMe scam.

Two of the scammers in the GoFundMe scam (image via GoFundMe)

On Monday, Bobbitt showed up in federal court to learn his fate. And the judge gave him probation. No prison time. Bobbitt has also been ordered to pay $25,000 in restitution.

For her part, the woman in question got one year in prison earlier this year. And her boyfriend, who was said to be the mastermind of the whole thing, received 27 months in April.

The End (of This Miserable Weather) Is Near

The city is launching a new loading zone reservation program that it hopes will reduce congestion in Center City. We’ll see how this goes.

And From the “Brewers? We Don’t Need No Stinkin’ Brewers” Sports Desk …

All hail Phils pitcher Aaron Nola. Despite an uneven season, he came into last night’s game against the Astros with what manager Rob Thomson would describe after the fact as “a look in his eye.” Nola went six and two-thirds innings of perfect baseball in a game where the Phils had a chance to clinch a wild-card playoff spot. Kyle Schwarber got things off swinging with a singleton homer in the first, then hit another in the eighth right after one by Bryson Stott, for a 3-0 lead.

Meanwhile, the Brewers, the Phils’ arch-nemesis in the post-season race, came from behind to take their game against the Diamondbacks to extra innings — and then to a 6-5 win, dabnabbit! But in the end, Jose Alvarado was golden in relief for the Phils before newfound closer Zach Eflin held the lead in the bottom of the ninth. Behold: For the first time in 11 long years, the team is headed to the playoffs. In the interim, they lost 893 games.

That’s a lot of losses. Cue the champagne and revelry! Come Friday night, they’ll play either the Cardinals or the Mets.

In other news, the Sixers traveled to post up against the Nets in their first pre-season match-up. Though the game was on NBA TV, the announcers were from the local network that carries Nets games. And, man, they could not say enough nice things about Ben Simmons. They can say what they like, but his stats weren’t exactly sterling. Simmons had six points, four rebounds, five assists, one steal, three-for-six on field goals and 0-for-two on free throws in 19 minutes of play. Those free throws? Utter clunks, charmingly accompanied by boos from the Sixers fans in attendance. Poor guy.

Because it was pre-season, we didn’t get to see some of the big names — Joel Embiid, James Harden and P.J. Tucker didn’t play — but it’s always fun to try to figure out who the new young guys are. (Hi, Jaden Springer, Trevelin Queen, De’Anthony Melton and Julian Champagnie — lookin’ good!) In other news, Nets star and notorious anti-vaxxer Kyrie Irving was having an interesting day, having gotten lambasted publicly by Kareem Abdul-Jabbar for spreading a toxic Alex Jones video on social media.

The Sixers led for almost the entire game, only going down by one point at, um, one point before pulling out a 127-108 win. “Simmons was wonderful to deal with on media day,” fanboy announcer Ryan Ruocco swanned when it was all over. See how you feel about him by New Year’s Day, friend. — Sandy Hingston