The little funk band that started out playing streets and parks is set to take its biggest stage yet at the XPoNential Music Festival. 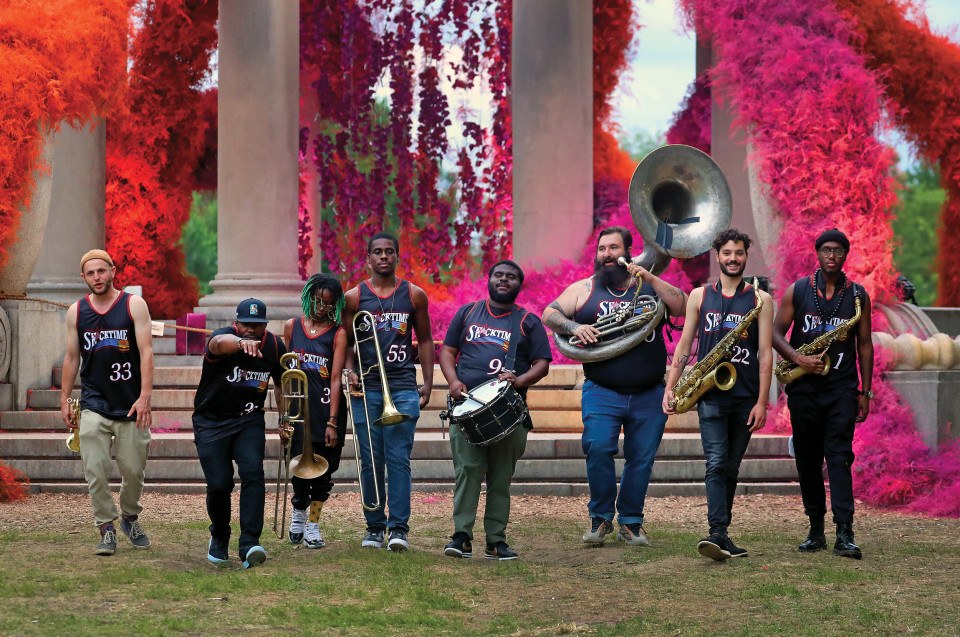 It’s been a busy and productive year for Snacktime.

The horn-based funk band performed at halftime on the Sixers’ court 10 times. They headlined the Flower Show and found a huge fan in none other than Fox 29 star Alex Holley, as she said on the air. They scored some big bookings at venues including Union Transfer and trendy events such as the Firefly Music Festival. And in March, they were finally able to record their first album, Sounds from the Street: Live, in front of a live audience — an album that dropped in July. As Snacktime founder, maestro and sousaphone player Sam Gellerstein half-jokingly bemoans, “Of course the ‘pandemic­ band’ had their album pushed back by the pandemic.”

These are impressive accomplishments for any local band, especially considering that the outlook for live music has been uncertain since Snacktime’s inception in 2020. That’s when they popped up out of nowhere, performing on the streets and in the parks of the city when none of us had anything to do or anywhere to go. Their constant public presence — what Gellerstein calls their “people-­centered approach” —  has turned them into a home-grown success story.

“A lot of the music world is based upon the model that people are going to hear your opus and then they’re going to be your fan for life,” he says. But Gellerstein, a Philadelphia public-school music teacher by day, aims to create an atmosphere of celebration and camaraderie that makes converts out of passers-by. That’s why all the band members knew their first album had to be recorded in front of a live audience, rather than in the studio. Snacktime feeds off the energy of the crowd. The album is a great achievement, but there’s really no replacement for seeing a band like this live.

This month brings Snacktime to its biggest stage yet: a second-line billing at the XPoNential Music Festival in Camden. Dozens of bands will be playing the two-day festival, with the vast majority performing on a satellite stage in Wiggins Park. That’s where Gellerstein thought Snacktime would be playing when WXPN bigwig Bruce Warren called him last year. “He was like, ‘Hey, I want you to come and play a little bit at this festival,’” Gellerstein recalls. But Snacktime is playing the main stage at Freedom Mortgage Pavilion (you probably know it by one of its former names, most recently the BB&T Pavilion), which features just three bands per night, including the likes of punk legend Patti Smith.

Gellerstein and his pals are the humblest of hometown heroes, and when he says things like, “Getting to play for the people of our city — that’s really what we want to do,” it’s with complete sincerity. Demand for the band continues to grow, both for public events and for private affairs like weddings — because who wouldn’t want Philly’s funkiest band to get their loved ones dancing? During our call, Gellerstein got an Instagram DM from someone asking Snacktime to play an event at 43,000-seat Citizens Bank Park. That pavilion in Camden may not hold their record for biggest stage played on for long.

Published as “The Snacktime Phenomenon” in the September 2022 issue of Philadelphia magazine.