In a just-filed federal lawsuit, Paula Patrick, who has been on the bench since 2003, calls the media outlet's article "reckless and malicious reporting." 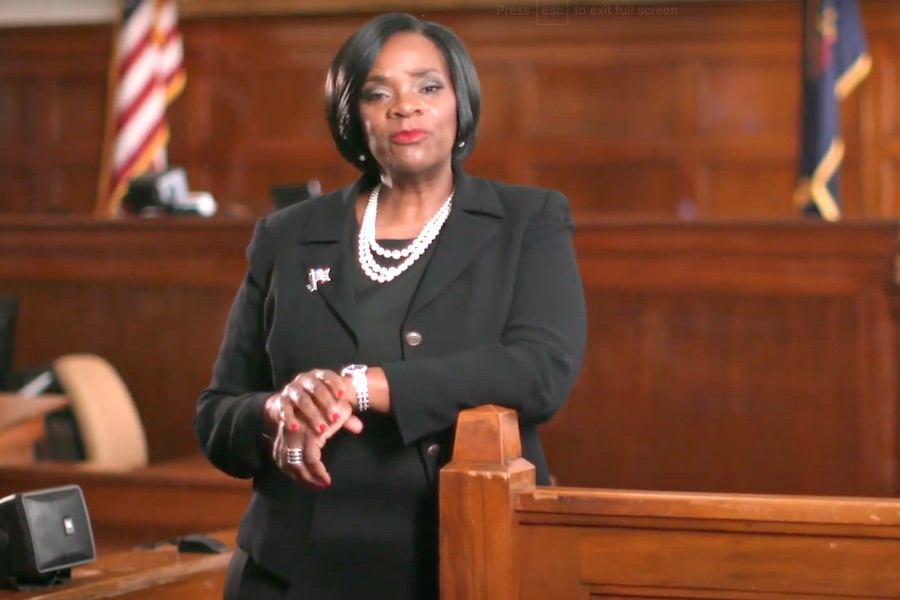 Philadelphia judge Paula Patrick, who is suing the Daily Beast for calling her “QAnon-linked.” (Image via Paula Patrick campaign video)

Paula Patrick is used to deciding court cases: She’s served on Philadelphia’s Common Pleas Court since 2003. But now, the Republican judge is taking on the role of plaintiff by filing a federal lawsuit in Philly district court against New York City-based online media outlet the Daily Beast, which referred to Patrick as “QAnon-Linked” in an October 2021 article.

The lawsuit stems from the mess surrounding the Christopher Columbus statue at Marconi Plaza in South Philadelphia.

You may remember that city officials said they intended to remove the statue back in July 2020 but were then forced to put that plan on hold due to legal action taken against the city over that decision. So, instead of removing the statue, the city covered it in a plywood box while waiting for the court battle to unfold.

Naturally, sticking Columbus in a box didn’t make his supporters any happier, so they went to court again, demanding the box be removed. And in October 2021, in the days leading up to what is still celebrated by many as Columbus Day, Patrick ruled that the plywood must come down. A transparent box would be OK, she allowed.

The news of Patrick’s decision quickly spread in local media outlets, and then the Daily Beast picked up on the ruling with a story headlined “QAnon-Linked Judge Rules in Unhinged War Over Philly’s Columbus Statue.”

Which brings us to this so-called QAnon link.

Months earlier, when Patrick was running for a seat on the Pennsylvania Supreme Court (she got walloped in the May 2021 primary), the Inquirer ran a story about a group of right wing conspiracy theorists who listed her as a speaker at their Gettysburg event, “Patriots Arise, Awakening the Dead!” According to that Inquirer article, Patrick told reporters she was never invited to the event and didn’t even know it existed until the press brought her inclusion on the speakers list to her attention. She quickly disavowed any connection to QAnon, and her name was removed from the list of people appearing at the event.

But before all of that, Patrick did appear on a podcast hosted by two of the organizers of the Gettysburg event. When asked about that appearance, “Patrick said she hadn’t researched the podcast and simply thought she was speaking on a show aimed at a Christian audience,” according to the Inquirer.

So when it came time for the Daily Beast to write about the Columbus decision, all of that got distilled into “QAnon-Linked” in their headline.

Patrick’s lawsuit against the Daily Beast is a false light claim, similar to defamation. In order to win a false light claim, Patrick would have to show the the statement made by the Daily Beast was false, that it would be highly offensive to a reasonable person, and that the statement was made with knowledge of or in reckless disregard of its falsity.

“In spite of widely available information and reporting that Judge Patrick was not affiliated with or otherwise ‘linked’ to QAnon, the Daily Beast … failed to properly investigate the outrageous claims attempting to link a well-respected jurist to a crackpot and unhinged conspiracy group know as QAnon,” Patrick’s lawsuit alleges. “This failure has resulted in a permanent stain on her otherwise well regarded and respected reputation and anyone who searches Judge Patrick will be confronted with the false light presentation that Her Honor is somehow linked to, and therefore guided by, these QAnon lunatics.”

The suit, which seeks unspecified damages, goes on to accuse the Daily Beast of “reckless and malicious reporting” and of failing to make “any attempt to confirm this alleged QAnon ‘link.'”

Patrick’s high-power attorney Jim Beasley and the Daily Beast both declined to comment for this article.