He talks about representing Taylor Swift, going after Al Qaeda, and what he'll be flying in Wednesday's Atlantic City Air Show. 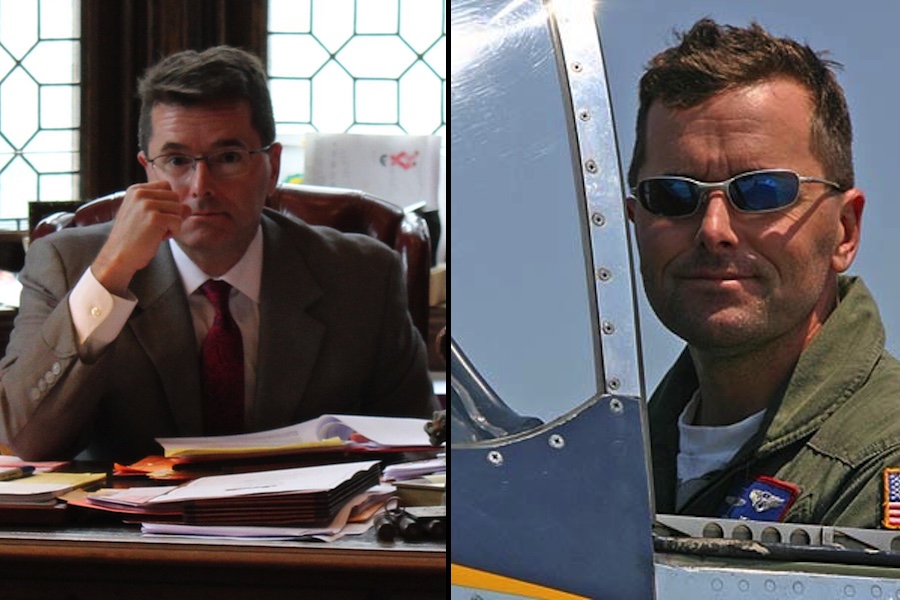 Jim Beasley Jr. is one of Philadelphia’s most successful plaintiffs’ attorneys and the son of late legal powerhouse Jim Beasley Sr. But he’s also an M.D., a motocross racer, and a pilot. On Wednesday, Beasley will be doing some very dangerous stunts at the Atlantic City Air Show using two of the airplanes that he owns. We caught up with him to learn more about this most interesting life.

My name is… Jim Beasley. Well, my full name is James E. Beasley, Jr., the “E.” standing for Edwin. But most people just call me Jim Beasley and my friends call me JBJ.

I was born in… Philadelphia at Jefferson Hospital and grew up in Villanova.

After high school… I went to Penn to be a scientist but then realized I didn’t want to be a researcher, so I got my J.D. and a medical degree from Penn, and then I also have an LL.M. in trial advocacy from Temple. I think I was the second person to get their J.D. and an M.D. from Penn.

The coolest thing in my office is… a musical score that I use as background music for my flight aerobatic team of P-15 Mustangs, which are World War II fighter planes. The score was written by James Horner, who was a dear friend. He wrote our music, which is for a 100-piece orchestra, and he also wrote the score for Avatar and Titanic before he died when he crashed his plane. He won two Oscars.

I learned to fly… at Northeast Philly Airport with my dad. He was a pilot. He taught me how to fly.

My most famous client was… Taylor Swift. She ended up buying an airplane that was all corroded, and we sued to get the airplane repaired. This airplane was junk. And we also represented George Zimmerman in a libel suit with NBC.

The biggest verdict I’ve won… was with my father, a $104 million dollar verdict that we got for a 9/11 claim. We brought a case against Bin Laden and Iraq. We’re still working on collecting. It’s been… an odyssey. And it’s a story better told over beers involving the Supreme Court and a plane with pallets of money on it.

The last time I took a real vacation was… eleven years ago for my 40th birthday. A bunch of buddies and I rode motorcycles from Encinitas to Cabo. We were out there for about a week.

The best concert I ever went to was… Black Sabbath at Madison Square Garden. And Motorhead at the Tower in 1983. That was amazing.

I love being Jim Beasley because… it’s just super fun. You never get what you expect. You can plan and plan but it’s all about calling audibles.

The toughest thing about being Jim Beasley is… the hours. You’re always on. These smartphones make it so you can’t get away from it.

At the Atlantic City Air Show, I will be flying… my P-51 Mustang and an SNJ-5 trainer. I own the P-51, two SNJs, a Cessna, a Piper Cub, and an Extra 330, which is a crazy aerobatic airplane.

The most scared I’ve ever been in a plane was… when I had an electrical failure in an F-86 transonic jet fighter over the desert. I didn’t have enough gas to get back to base. This was a major electrical failure in a Korean War-era jet. I figured it out, eventually. I really wasn’t thrilled with the idea of ejecting.

I drive a… Ram 2500 pickup and a BMW. I’m not a big car guy. But I have 25 or 30 motorcycles. I’ve been racing motorcycles since 1981, and I love rebuilding them. It’s Zen and the Art of Motorcycle Maintenance, all the way.

My wife is always telling me… that I have too many motorcycles.

The biggest difference between the legal profession now and when I started is… that there are just too many lawyers and the ethics have really dropped.

Doing business in the City of Philadelphia is… great. Philly is the best place to work. Yes, you have the Business Privilege Tax and other government issues, but the cities are cool. And the juries are fair. Well, for the plaintiffs, anyway.

My lucky charm in the cockpit is… just me. I’m not superstitious. If you have a lucky charm and you forget it, well, then you’re really in trouble.

If offered a free ride on Richard Branson’s spaceship, I would say… you can take it. I’m good where I am. What are you gonna do, fly up into space and come right back down? Now, if I could fly it, I would do it.