Not every city has its very own word, yo. 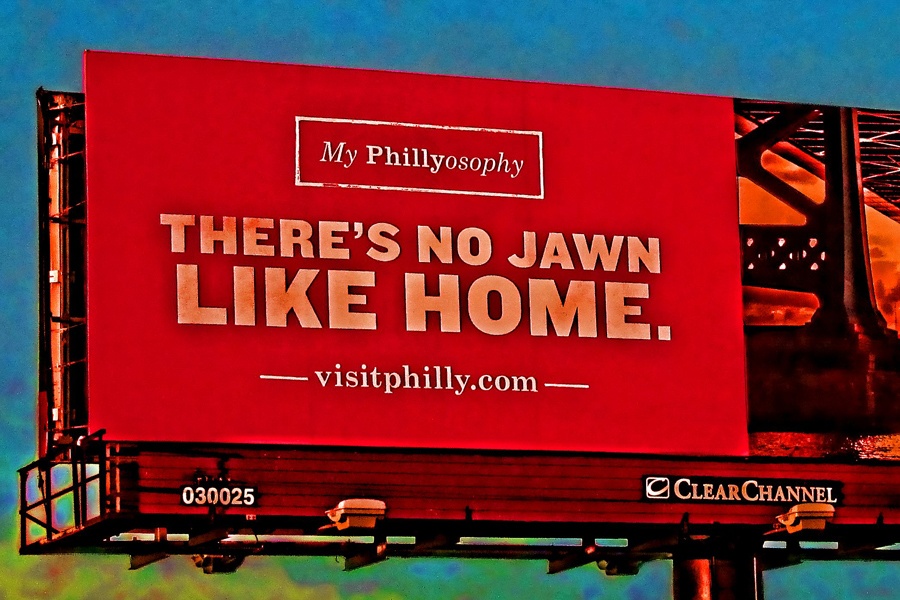 A jawn billboard by Visit Philly from years past. Photograph by raymondclarkeimages/Flickr

So every once in a while, Philly’s peculiar linguistics bubble up into the cultural conversation. It could be when Bryce Harper wears his “Clearwooder” t-shirt. When @paradenoia remakes Ferris Bueller’s Day Off with a local angle. Or when the L.A. Times dissects Kate Winslet’s Mare of Easttown accent.

These occasions always remind us of the city’s single greatest contribution to the American lexicon: jawn. Or, as Dan Nosowitz of Atlas Obscura has described it:

The word “jawn” is unlike any other English word. In fact, according to the experts that I spoke to, it’s unlike any other word in any other language. It is an all-purpose noun, a stand-in for inanimate objects, abstract concepts, events, places, individual people, and groups of people. It is a completely acceptable statement in Philadelphia to ask someone to “remember to bring that jawn to the jawn.”

Well, of course it is. In Philly, dammit, we say what we mean. Here’s some info about our unique and irreplaceable all-purpose noun.

Becoming Respectable
According to Merriam Webster, the dictionary people, “jawn” is a descendant of “joint,” a word that originally (and we mean back in the 1200s) referred to a place where two bones meet up, as in your ankle joint. That meaning gradually led “joint” to refer to a place where shady characters meet up and hang out, as in an opium den. (Thus the word’s use for drug paraphernalia in general and eventually, in particular, a marijuana cigarette.)

Through a process known as “semantic bleaching” (sounds painful!), the disreputable part was gradually lost, and a “joint” simply became a place, as Cab Calloway defined it in 1939 in his Hepcat Dictionary (as in “the joint is jumpin’”). In the South, a “juke joint,” perhaps itself a variation of “jug joint,” was a gathering place for Black people to enjoy music, drink and dancing while they were excluded from white establishments.

A Multitude of Meanings
“Jawn” seems to have developed as a Philadelphia variant of “joint” sometime in the 1980s, after the release of a hip-hop song called “That’s the Joint” by a group from the Bronx, Funky Four Plus One. Through more semantic bleaching, “joint” became less a place and more a thing. And because of the Southern drawl’s influence on Philly-tongue, not to mention that of African American Vernacular English, we tend to draw out our vowels and swallow our final consonants, so … no “t.” As a couple of grad students explain in the Philadelphia Encyclopedia, “In essence, Philadelphia created the pronunciation of the word, but its meaning already existed.”

Or, rather, meanings. Jawn has been used to refer to a cheesesteak (“Put some onions on that jawn”) and the person with whom someone is cheating on another someone (as in “side-jawn”). The plural can be either “jawns” or “jawn.” We’re not a fussy city. Nosowitz goes so far as to call it “a magical word.” It must be; it’s even been dissected on public radio.

The Inquirer’s Angry Grammarian tried to slam the lid on jawn way back in 2019, bemoaning its commercial co-opting by, among others, Fishtown’s Lokal Hotel, a Christmas decor operation, Vitamin Water, at least one podcast, and the Rocky movie Creed. Sorry, Angry; jawn doesn’t seem stoppable. It’s been dissected by bloggers, pro sports teams, sports fans and Questlove, as well as would-be scholars. You can even buy a t-shirt that celebrates its contribution to a local delicacy, or one that marries two of our greatest accomplishments: Wawa and the word. One man’s crass commercialization is another man’s triumph in Idiom Abroad. There’s no sense fighting it; smarter to just give in. We’re proud of that jawn around here.