Vaccinations Are Increasing, But Philly’s COVID-19 Cases Have Stopped Declining. What Gives?

We check in with the pandemic modelers at the CHOP Policy Lab as the coronavirus pandemic enters what is hopefully its final phase. 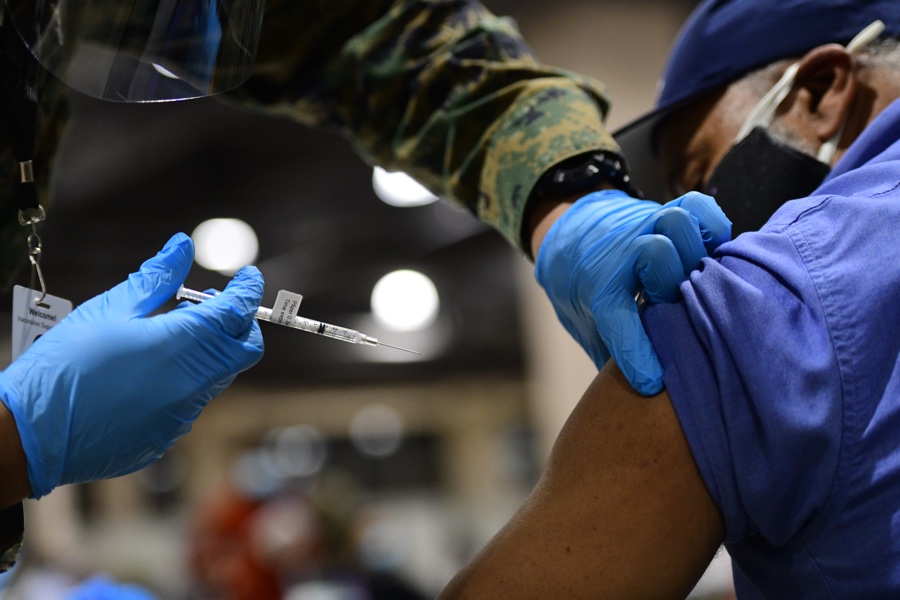 A COVID-19 vaccine is administered at the Pennsylvania Convention Center in Philly. Photo by Mark Makela/Getty Images.

As the pandemic has ebbed and flowed, we’ve checked in on occasion with the researchers from the CHOP Policy Lab, who have been tracking the pandemic nationwide for months and modeling its future course. When we last touched base, CHOP researcher David Rubin painted an optimistic picture of declining case counts, hospitalizations and deaths, along with increasing vaccinations. We frankly hoped that would be the last we time we spoke with Rubin’s team. Alas, in recent weeks, cases in Philadelphia have stopped declining and have instead started to rise. In some other parts of the country, cases and hospitalizations are back on the rise, too. What gives?

“We’ve been in a sort stall pattern over the last couple of weeks,” Brian Fisher, a member of the CHOP research team, says of the Philly region. We spoke with him more in depth about why that might be — and why CHOP’s model is currently predicting a slight uptick in cases over the next three weeks.

A Mix of Upward and Downward Pressures

Given how many twists and turns there have been throughout the pandemic, it figures that things wouldn’t necessarily come to a tidy end with the arrival of vaccines. Still, it’s been something of a surprise to see a slight rise in case counts in the Philly region over the past few weeks, especially at a time when we continue to break records for the number of vaccines administered each week. Health commissioner Thomas Farley said recently that he wasn’t sure what was driving the current case rate, which, at an average of 400 new cases per day last week (up from 287 the week before), is well below the winter peak but still above last summer’s level. “It’s possible that there’s some variant of the virus in this region,” he said, before noting that “the epidemic always follows patterns that we can’t fully explain.”

Fisher is hesitant to pin the rise in cases on the variant. “In this country, we don’t have great data on the variant,” he says. And even though we know, for instance, that the British variant prompted a spike in cases in the U.K. during the winter, that comparison isn’t as useful in the United States during the springtime. “We do have to be careful to extrapolate the impact of the variant in another country at very different point in time of the pandemic, when many other variables were different: the population being infected, the number of people infected before the variant hit, the weather at that time, whether it was near the holiday season,” says Fisher.

Scientists expect that the British variant will become the dominant strain of the virus in the U.S. by this month, but that doesn’t inherently mean the number of cases will rise. The main problem right now, Fisher says, is that while there are clear negative pressures on transmission — most notably the vaccine and improving weather — there are also positive ones, whether it’s a more contagious variant, or simply pandemic fatigue among people who are becoming more lax with masks and “testing the system” as they think the end of the pandemic is in sight. In any event, the result is the same: According to the CHOP model, each new person to get COVID-19 in Philly is passing the virus to one new person. Which is precisely why cases in the Philly region are no longer dropping.

Mixed Signals in Other Parts of the Country

One source of confusion for pandemic prognosticators is what’s going on in the rest of the country. In parts of the South and West, lawmakers have eased restrictions in recent weeks, which one might expect to spur a rise in cases. Instead, they’ve been going down. In the Northeast, historically one of the more mask-compliant parts of the country, cases have stopped their downward slide. Meanwhile, in the Midwest, cases and hospitalizations have been on the rise, bucking a recent trend where rising cases didn’t seem to be as correlated with hospitalizations. (Experts believed that was probably because younger people, who are less likely to end up hospitalized, were accounting for most of the new cases.)

What to make of it all? Earlier in the pandemic, Rubin told us that the viral situation in the Midwest often ended up coming to the Philly region a few weeks later. Fisher isn’t so sure anymore — there are simply too many new variables. (As with stocks, past pandemic performance doesn’t predict future results.) But there are some indications that a similar dynamic might be at play; according to Farley, hospitalizations in Philly are back on the rise — there are now about 300 people hospitalized with COVID-19 in Philly, up from the recent low of 200 during the first week of March. Farley says he expects deaths will eventually follow.

To Fisher, what’s going on in Midwestern cities like Detroit is a sign that the pandemic is “not magically going to melt away. We need to be careful not to be a little too flippant or quick to move back go normalcy.”

Caution Should Still Rule the Day

The weather is getting warmer. The vaccines are getting distributed faster. But, Fisher says, it’s not quite time to rejoice.

He’s confident that schools can still safely reopen; according to a new Centers for Disease Control study, kids in school can safely sit within three feet of each other in the classroom, provided they are wearing masks. Fisher is more worried about the potential return, weeks from now, of larger events — especially indoors. “It really is something we have to decide in the moment, with the numbers we’re seeing in current time,” he says.

More than any governmental restrictions, though, Fisher thinks private gatherings might be driving the last gasps of the pandemic. Despite all the positive signs, the fact of the matter is that only about 20 percent of Philly’s adult population is fully vaccinated.

“I’m more worried about people gathering in their homes,” Fisher says. “A lot of people, I think, are likely saying, ‘Let’s get together on back porch and stay six feet apart.’ That happens early in that gathering, and then nighttime comes, it starts to cool off and it’s little bit too easy to walk inside and gather closer there. We don’t have a metric for that, but I would hypothesize that’s probably been happening in recent weeks.”

This story has been updated to include the latest data from the Philadelphia Health Department.