The Philadelphia vaccination sites range from doctors’ offices and pharmacies to FEMA's Convention Center clinic and other mass vaccination operations run by the city and community partners. Here's the latest on what's happening at the various locations. 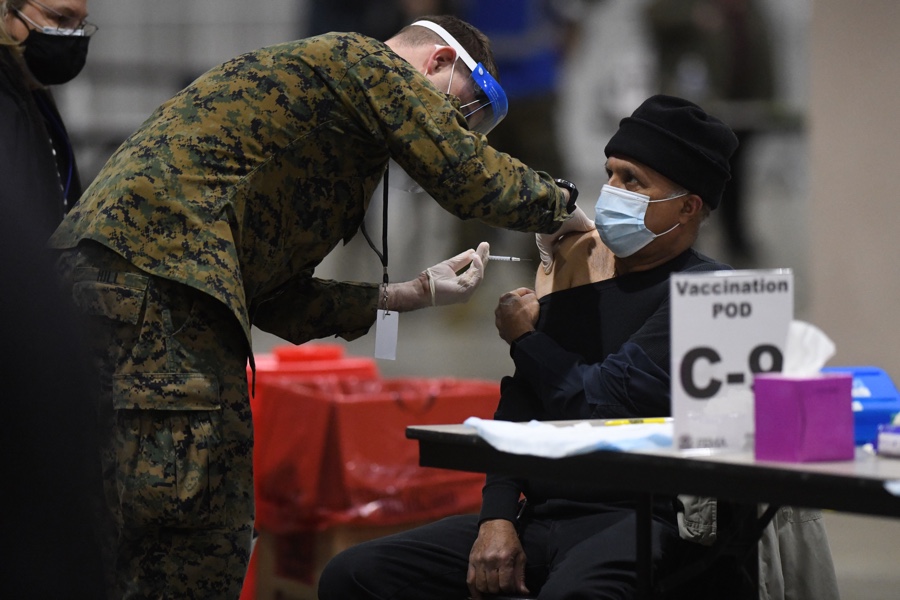 Of the many COVID-19 vaccine sites in Philadelphia, the one run by the Federal Emergency Management Agency at the Convention Center is the largest, administering some 6,000 shots per day. Photo by Mark Makela/Getty Images.

If you’re reading this, we have good news to share: You can officially get the coronavirus vaccine. On April 16th, health commissioner Thomas Farley announced that all Philadelphians age 16 and older are now eligible to be vaccinated. And now that everyone in the city is eligible for the vaccine, it’s becoming increasingly easy to get the shot. You can go to the health department website at phila.gov/vaccine and make an appointment at either of the two clinics run by the Federal Emergency Management Agency (FEMA), or at one of the neighborhood clinics run by the city.

“We’re entering a new phase,” Farley says, “where we’re going to be more in the position of encouraging people to come in and making it as easy as possible, rather than restricting access.”

All three COVID-19 vaccines are once again available in Philadelphia, after the Centers for Disease Control and the Food and Drug Administration opted to lift the temporary nationwide pause on Johnson & Johnson vaccine on April 23rd. The CDC and FDA found that the severe blood clots linked to the vaccine were exceedingly rare — Farley, too, has said the risk of clotting is about that of dying from being struck by lightning — and recommended adding a warning label to the vaccine.

Vaccinations are currently taking place at a number of sites across the city: the Convention Center and the Esperanza Academy Charter High School, both of which are run by FEMA; doctors offices; federally qualified health centers; pharmacies; city-run neighborhood clinics; and independent mass clinics like those conducted by the Black Doctors COVID-19 Consortium and certain hospitals. Some of the sites are appointment-only; increasingly, most serve walk-ins.

There are lots of options. So here’s a detailed breakdown of what’s going on at the various points of vaccine distribution as late April.

Hospitals started off in December by vaccinating their own staffs. After that, physicians began reaching out to their patients in order to schedule on-site vaccinations. (This same process has been ongoing at federally qualified health centers.)

In addition to vaccinating their own patients, hospitals — including Penn, Temple, Jefferson and Einstein — are now running mass clinics, many of which are open to the public. The city is also providing funding to vaccine providers through a request for proposals process, with the hope that the money will help providers expand their existing operations. Those four hospital systems are among those to receive funds.

The city initially tasked pharmacies with vaccinating people over the age of 75. Now, everyone can go to a pharmacy for an appointment. Rite Aid, CVS, ShopRite, Sam’s Club, Walmart and Acme, along with a number of independent pharmacies, are all offering vaccine appointments.

The strategy of relying on pharmacies hasn’t been without its share of hiccups. In March, the Inquirer reported that an outsized proportion of people getting shots at pharmacies were white. And according to a WHYY report from that same month, many pharmacies have been receiving doses from Philly’s vaccine supply, only to inoculate people who don’t live in the city.

Still, as vaccine eligibility expands, pharmacies are an increasingly essential part of the distribution strategy. Taken together, they currently constitute the single largest provider of vaccines in the city.

So how can you secure an appointment? The easiest way is to contact pharmacies directly. Many of the larger chains have websites where you can search available appointments. You can also try calling individual locations.

The city maintains a map of all eligible vaccine providers, including pharmacies, which you can consult here. (This map strictly provides a visualization of where vaccine is being administered; it does not show where vaccine appointments are available at a given time.)

The health department has its own mass vaccination clinics for members of the public. The clinics, which can administer up to roughly 500 shots per day, take place on a rotating schedule.

Since early March, FEMA has been running a mass vaccination clinic at the Convention Center capable of administering roughly 6,000 shots per day. The prospect of a mass vaccination site that could operate seven days a week, delivering some 40,000 weekly shots — by far the most of any location in the city — was hailed by the health department as a chance to close the vaccine equity gap. (White Philadelphians have received a disproportionate share of vaccines in the city.) An Inquirer analysis found that the FEMA site failed to achieve that goal: During the clinic’s first two weeks, white people received more than half of all doses, which actually exacerbated the existing racial gap citywide. In response, the health department introduced walk-up appointments to the clinic, which appeared to help.

FEMA spent its first six weeks giving first and second doses of the Pfizer vaccine. Now that that process is finished, the clinic is once again giving first doses of Pfizer. After three weeks, the clinic will then switch to second doses. That will take the clinic to late May, at which point it’s scheduled to end for good.

The city’s second FEMA clinic, at the Esperanza Academy Charter High School in Hunting Park, began administering shots on April 9th and will run for eight weeks. That clinic, located neighborhood with a large Hispanic population that has seen a lower share of vaccinations than other parts of the city, has already done a much better job than the Convention Center of vaccinating underrepresented groups, according to the health department. The clinic, open five days per week, can give up to 1,500 shots each day.

Both FEMA clinics are open for appointments — which you can schedule here — and for walk-ups.

The Black Doctors COVID-19 Consortium is the most visible community group organizing mass vaccination clinics in the city. All of the BDCC’s clinics are walk-up only. Since the group is administering Moderna, only those 18 and older are eligible to get the shot. (Pfizer, on the other hand, is authorized by the FDA for people as young as 16.) You can consult the BDCC’s website for the weekly schedule. The BDCC is also among those groups to receive vaccination funds from the city, though the amount has yet to be announced.

So What Should You Do Now That You’re Ready For a Vaccine?

The simplest thing you can do is walk up to one of the FEMA clinics, one of the health department’s neighborhood clinics, or one of the independent clinics like those run by the BDCC. If you’re more of a planner, you can still schedule an appointment for the government-run clinics online through the health department. (People without internet access can call the city’s hotline at 215-685-5488 or 311 to get help scheduling an appointment.)

Whatever you do, it’s never been easier to get vaccinated.