Has Philly Turned a COVID Corner? This Pandemic Modeling Expert Is Optimistic

David Rubin, who's been modeling the pandemic for months at CHOP, shares three reasons for optimism and two causes for concern (because it can't be all good news, right?). 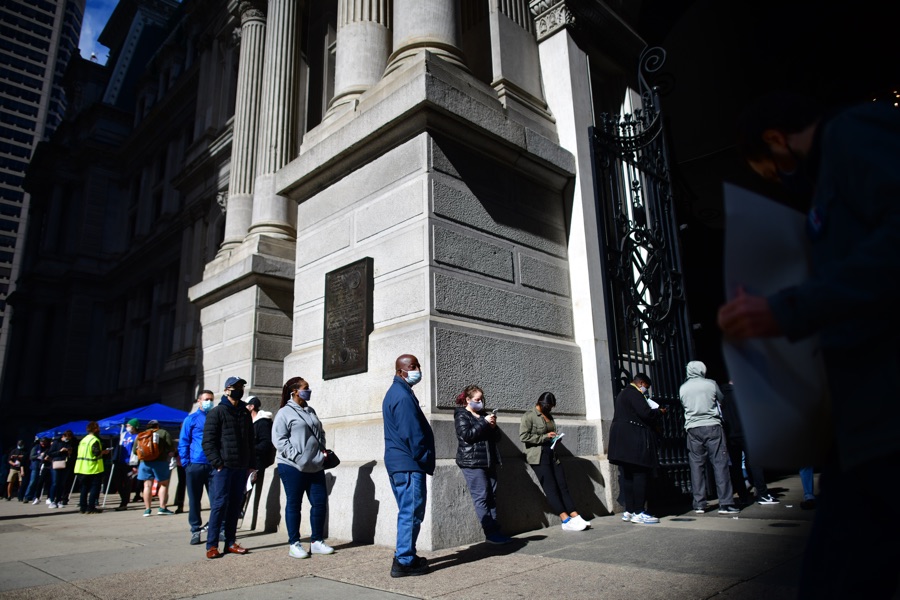 David Rubin of the CHOP Policy Lab, along with a team of 15 researchers, has been modeling the course of the pandemic nationwide for months. Each week, using a variety of data including local case rates, social distancing (as measured through cell-phone tracking data), hospitalizations, population density and age, Rubin tries to project national trends — and future hot spots — for the next four weeks.

Lately, Rubin says, “When you look in the Philadelphia region, you see this sort of fragile equilibrium: We’re at very, very high case incidence, very high rates of hospitalization, and they’re neither growing nor declining.”

But recent events have made him optimistic about Philadelphia’s future. Here’s why:

Strain on Hospitals May Be Declining

Currently, hospitalizations are falling in Philadelphia — they’re down to an average of 600 over the past two weeks, compared to the peak of 970 in May. Still, even with that decline, hospitalization totals across the region are as high as they’ve been since the spring. But Rubin says there are positive signs coming from the Midwest, “a region where a lot of the directionality of transmission has come from.” There, he says, “They’re seeing increasing transmission rates, but they’re not necessarily seeing that coupled to hospitalizations in the same way it was back in November and December.” That implies fewer severe cases and fewer deaths. Rubin believes this trend likely has to do with who is getting the virus: “That suggests we’re seeing more working-age adults in this new wave of transmission.”

One other bit of  good news: Rubin says test positivity rates are dropping nationwide. “That’s a pretty nice leading indicator that things are starting to soften up a bit around the country,” he says.

Vaccinations Could Start to Help … Slightly

First, the bad news. “The vaccine is not going to make its way through the population quick enough to to change the course of the next month or two,” Rubin says. On the other hand, the prioritized rollout of the vaccine should at least provide targeted relief among the elderly and other vulnerable populations. “That’s going to act as a negative force on continued transmission,” Rubin says, and could also end up reinforcing the trend of decreased hospitalizations.

“A lot of the increasing restrictions were related to our hospitals exceeding capacity,” Rubin says. With his optimistic outlook on that front, he isn’t opposed to modest reopenings. “By and large, most public-health folks would suggest that the greatest amount of transmission is really occurring during informal gatherings,” he says. “So I’m actually more bullish on limited restaurant, gym and theater openings than people might suspect, because I’m not sure that’s where, at limited capacity, the lion’s share of the transmission is occurring.”

Still, not all of the latest trends are rosy. Here’s what’s still concerning Rubin as he looks ahead:

Even as cases in Philly have dropped by a third since the city implemented its latest round of coronavirus restrictions in November, Rubin’s model predicts a slight uptick in cases over the next four weeks. Why? The collar counties continue to record stubbornly high case counts. And while that hasn’t directly impacted Philly’s model yet, “If you want to know what’s going to happen in Philadelphia in the upcoming weeks, look to the collar counties, because they usually are the leading edge of whatever transmission we might expect.”

The New COVID Variant Is Here

Last Friday, city health department officials announced they had confirmed the first case of the new COVID-19 variant that is thought to be more contagious than the current strains. One estimate projects this variant will be the dominant version of the virus by March.

Rubin says his Philly model hasn’t yet accounted for the presence of the new strain. But he’s been watching New York City — where scientists have already identified the variant — with some trepidation. “I’m very mindful that regional effects spill over,” he says. This week, though, cases in New York appear to have stabilized, and Rubin suggests a somewhat perverse reason why the variant may not explode stateside the way it has in Europe: So many people here have already had the virus that there simply aren’t as many of us susceptible to infection. “To me,” Rubin says, “it just comes down to a reminder that we need to double down on the things we know that work — mask-wearing, keeping our cohorts small — whether it’s an increasingly transmissible strain or not.”

The bottom line: When Rubin takes a holistic look at his model for the region, his overall takeaway is one of optimism.

“I think we are rounding a corner,” he says. “Even as we’re in the worst of this — because the present moment is the worst of this — when you look at the next three or four weeks and you start to see the models and the way things are changing, what you’re seeing is recovery.” Let’s hope it stays that way.