City Commissioner Al Schmidt, Hero of the 2020 Election, Is Ready to Call It Quits

Attacked by Trump and targeted by his base, the embattled Republican explains why this term will be his last. 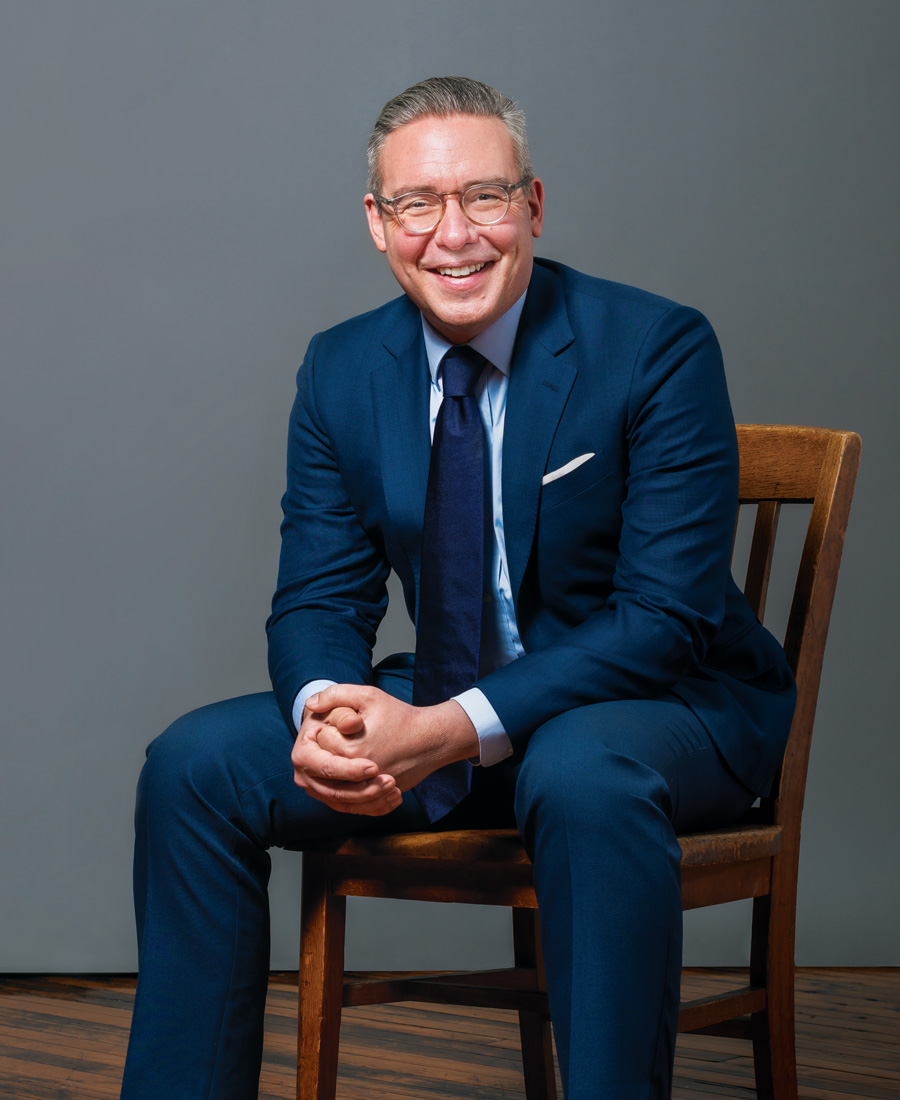 City Commissioner Al Schmidt says this term will be his last. Photograph by Linette & Kyle Kielinski

When Al Schmidt first ran for city commissioner in 2011, seeking one of the three seats in charge of Philly’s elections, he probably never thought the U.S. president would one day take to Twitter to accuse him of enabling election corruption. Here, he reflects on his time in office and insists that no, dead people don’t actually vote in Philadelphia.

Had we done this interview a few months ago, I’m sure I wouldn’t have led with a question about Donald Trump. But given that his attack on you made national news in November, I feel like we have to start there. Just how bad was the fallout from his tweet?
I had received implied death threats during this election prior to that tweet. But after that tweet, these threats became very specific, involving my children by name, their ages, and what these monsters said they intended to do to them. My children had to move away from home and have a security detail at all times.

I had no idea. I’m so sorry.
I haven’t spoken about it until now. And you know, the President certainly didn’t say, “Do these things.” But I have a PhD in history, so I am always looking at things through the context of history. At one point, Henry II says to his supporters, “Will no one rid me of this turbulent priest?” And in saying that, he didn’t tell anyone to do anything, but he signaled it and singled out someone. So that is the prism through which I read that tweet.

Trump’s sentiments about Philly’s elections weren’t exactly new. I’ve lived here all my life, and I’ve heard the old “dead people voting” thing for as long as I can remember. Has anybody ever actually voted in the name of a dead person?
Since coming into office in 2012, we have investigated many different types of voting irregularities and voter fraud, and we’ve referred dozens of allegations to law enforcement, and they have resulted in more than a dozen guilty pleas. Some have been very small but still not legal, like somebody voting for a spouse who is sick. And some are big, like that judge of elections in South Philly who was adding votes at the end of the night in 2014, ‘15 and ‘16.

But as for the idea that somebody has voted in the name of a dead person, this has never been proven. There is this false report circulating about supposed dead voters. And we have investigated these claims dozens of times, and every single time, there’s no evidence of fraud. 6 ABC once undertook a really thorough examination of “dead voters,” and they narrowed it down to about 12 cases. And we thoroughly investigated each one. And in every case, the voter was either alive, which meant I knocked on the door and talked to them, or a voter had the same name as another voter in that precinct who died, and they signed the wrong line.

You’re saying this isn’t fraud — it’s a mistake.
Right. They aren’t casting a vote for their father with the same name who just died. They are signing the wrong line. So that doesn’t mean that two votes were cast by one person or that the vote is illegitimate. It just means they signed the wrong line.

There was a lot of stress over how this election would go, with the newish machines, the mail-in ballots, the huge turnout, the worries over intimidation. So how did it go?
I am glad it went as smoothly as it did. And that was a product of incredible preparation. The biggest problem was that the court said we weren’t allowed to begin canvassing the mail-in ballots until Election Day. So then somebody says, “Well, Florida finished counting a week ago; why is Philadelphia still counting?” That’s because Florida is allowed to review envelopes, open the inner envelopes, and count ballots in advance of Election Day. We couldn’t do anything. That needs to change.

One of the big worries was that people were going to forget to use the inner secrecy envelope, which the court said would invalidate their ballot. Did that turn out to be a big problem?
As a testament to all the outreach by governmental and non-governmental organizations, there were a lot fewer of these “naked ballots” than we feared. And I have to say, whoever branded them as “naked ballots” was a genius, because the phrase was very attention-getting.

“Whoever branded them as ‘naked ballots’ was a genius, because the phrase was very attention-getting.”

There was also concern over whether you’d be legally allowed to count ballots that arrived after 8 p.m. on Election Day, even though one court said you could. Did you receive many of those?
No. That was the biggest surprise. At the end of the day, we had fewer than 1,000 ballots received on Wednesday, Thursday and Friday. That’s fewer votes than were cast in any single division. If the race came down to 100 votes, it could have been a really big deal, but that’s not how this election played out.

Looking forward to how you can improve future elections, what were your takeaways from this one? We need to continue to advocate for mail-in voting. As I said, we need to begin the canvassing earlier to close the gap between when people think elections are over and when they’re actually over. And there’s one other thing, and it really haunts me.

What’s that?
I think this is particularly true of Philly. It’s how people echo things or parrot things that have no basis in fact, like dead voters, or someone who goes from one place to another to vote multiple times in other people’s names. These stories get repeated over and over without any basis in fact, and yet no amount of facts will dissuade somebody from repeating them. This is one problem I do not know how to solve.

One complaint I kept hearing from voters is that the state’s vote-tracking website, which is supposed to allow voters to see the status of their mail-in ballots, wasn’t actually reflecting the status of their ballots. In fact, just before this interview, I checked on a few readers’ mail-in ballots, and that state site still shows their ballots as pending even after all of the votes have reportedly been counted, whereas my mail-in ballot has been marked “recorded.” This led to a lot of confusion, uncertainty, and a lack of faith in the system. Can anything be done about that?
That is the S.U.R.E. system, which stands for Statewide Uniform Registry of Electors. It’s nearly 20 years old, and it’s flawed. It led to a lot of extra work for us leading up to Election Day when our time would have been better spent working on other parts of the elections. There was a lot of frustration, and it undermined the confidence in whether your vote was counted or not. Transparency is a good thing. But only if the information you’re providing is truthful and accurate.

Since mail-in ballots are probably here to stay, I hope the state is going to overhaul or replace this system.
My understanding is that they are working on it. 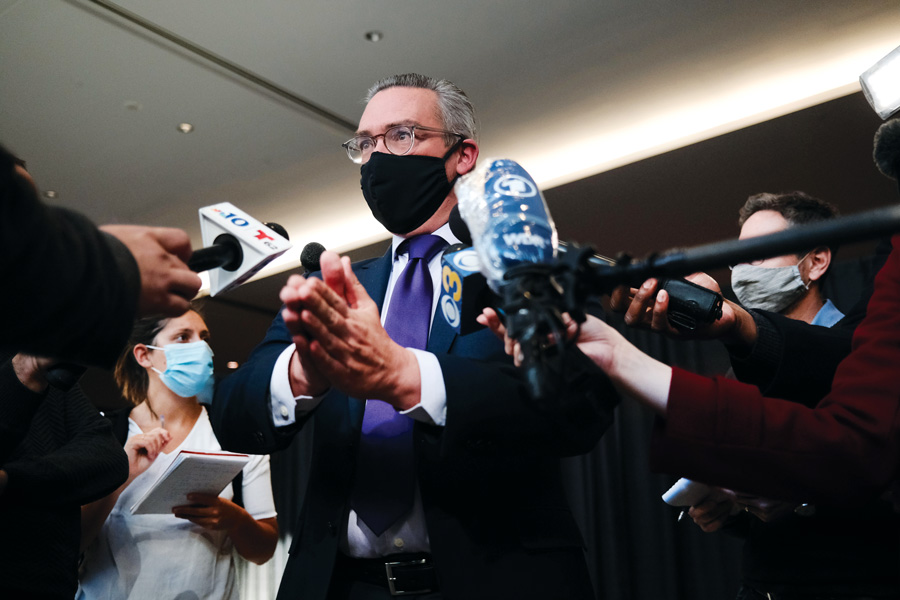 Schmidt spoke to the press on November 4th about the vote-counting process in Pennsylvania. Photograph by Spencer Platt/Getty Images

Right before the election, I saw a media report that 90 percent of eligible voters were registered to vote in Philadelphia, which seems suspiciously high, even though I know there was a lot of interest in this election.
Well, the Pennsylvania registration system prohibits anyone from being removed from the rolls unless they’ve been inactive for seven years, which is missing 14 elections in a row. So if you look at a dorm at Penn, it might have 200 students, but 1,200 students who are registered to vote there, because they registered there six years ago but now they live elsewhere. So I’d like to think we are at 90 percent, but those reports are using voter rolls that aren’t reliable. We should be thinking more about active voters, as opposed to just people who are registered. It’s a much more useful metric.

You’ve held this office for almost 10 years. Do you intend to be there for another 10?
No, I think this is it for me. Not because of the turbulence, but because it’s important to be aware that you got elected to bring about certain improvements, and there should be a clock ticking on the time you have to do that. The time is really running out for me, and by the end of this term, I will have done what I was elected to do.

And then what? The private sector? Another political office?
I really haven’t thought about it.

Prior to Trump’s critiques of you, there had been other controversies during your tenure, most notably ethical allegations surrounding the selection of the new voting machines — suggestions that you were unduly influenced by the manufacturer of those machines, you personally traveled to their headquarters — the list goes on. Did you do anything wrong?
No. Absolutely not. I didn’t have the vendor or the city pay for anything regarding my travel or anything relating to it. I didn’t even seek reimbursement by the city.

In 2009, prior to your election as commissioner, Philly Mag suggested that you were one of a few people who could save Philly’s lackluster Republican Party, which seems like it hasn’t gotten any better since then. Actually, it’s far worse. What happened?
Ultimately, it comes down to the quality of candidates that you can attract, and it becomes increasingly difficult, when a party becomes less competitive, to recruit people to stand with it. Running for office isn’t easy. And when the perception is that you have virtually no chance of winning, it creates something of a death spiral.

Have you always been a Republican?
No. I had been an independent, but when I lived in Boston, I changed to Republican. This was 1994, when there were some really impressive Republicans, like Mitt Romney, Bill Weld, who was the Massachusetts governor who wound up running for president, and others that I admired.

Okay, I saved the really important question for last. In a city government with a lot of poor style choices and ill-fitting suits, you — well, you always look so good. How do you pull that off?
Hey, Helen Gym dresses really well. For me, it’s just respect for the office. And I tend to wear very timeless outfits that could be me in 1960 or 1980 or 2020.

You’re saying you don’t want to be the guy who in some history-book photo in 2050 is the one in the ruffled tux shirt.
(Laughs). Oh my God! What was he thinking, wearing that ascot?!

Published as “Final Terms” in the January/February 2021 issue of Philadelphia magazine.