Al Schmidt Isn’t a “RINO.” And He Isn’t Hiding Corruption

Keep the city commissioner’s name out of your mouth, Mr. President. 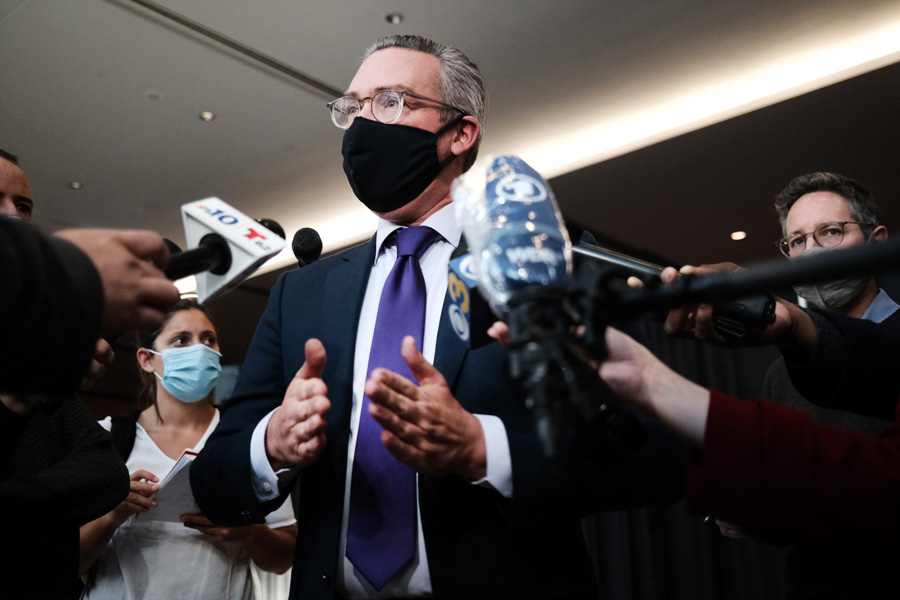 City commissioner Al Schmidt has been baselessly accused of turning a blind eye to corruption by Donald Trump. Photograph by Spencer Platt/Staff/Getty Images

In his escalating campaign to deny the inevitable — that Joe Biden has won both the popular vote and the requisite number of states to carry the Electoral College, and thus will become America’s 46th president on January 20th — losing candidate Donald Trump has, per usual, taken to Twitter, looking to cast aspersions on the integrity of the election.

So far, this effort has included claiming that mail-in ballots have ended up abandoned in rivers, that pollsters are part of an anti-Trump conspiracy to depress votes, and that election officials (usually in cities with large Black voting populations) are hopelessly corrupt.

This morning, he attacked Philadelphia’s own election commissioner, Al Schmidt, via tweet, saying that Schmidt “is being used big-time by the Fake News Media” — presumably a reference to the interviews Schmidt has given to 60 Minutes and other national outlets in which he explains and defends the methodical way Philadelphia has undertaken the massive vote-counting operation. Moreover, Trump claimed that Schmidt — whom he called a “so-called Republican (RINO)” (it stands for “Republican In Name Only”) — “refuses to look at a mountain of corruption and dishonesty.”

This, let’s be clear, is bullshit. The election in Philadelphia and all of Pennsylvania has been run remarkably smoothly and professionally, with fewer hiccups than were expected considering the surge of mail-in voters. Schmidt and the county commissioners have done an honest and upstanding job of counting the votes, protecting the integrity of the election, and being as transparent as possible with the public. Even the President’s lawyers have said in court that there’s no evidence of widespread fraud.

Fagone interviewed Schmidt in 2009 for this magazine. At that time, Schmidt was facing an uphill battle to make Philadelphia’s Republican Party more effective, competitive, and present in the city’s political scene. In 2009, that meant Schmidt embarking on a poorly supported run for City Controller. As Fagone writes:

He was more than qualified. From 1999 to 2001, he’d worked on Bill Clinton’s Holocaust commission, helping to track down Nazi cash streams and returning ill-gotten gains to Holocaust survivors. He went on to join the nonpartisan U.S. Government Accountability Office, auditing several federal agencies involved in counterterrorism and intelligence gathering. Schmidt had served his country with distinction. And now, as a candidate for City Controller, he’d be running against incumbent Alan Butkovitz, a Democratic ward leader who, Schmidt says, failed to audit his fellow Democrats who ran city agencies, as he was required to do by law. It was a textbook case of a one-party system producing a perverse result, and a golden opportunity for the Republicans.

Schmidt lost that race but was elected a city commissioner in 2011. According to his bio, “Since being elected, Al has worked to modernize election operations, improve efficiency, and bring integrity to the election process.”

Schmidt, for his part, wasn’t deterred by the presidential (unpresidential?) tweet, even though, as Fagone notes, local election officials have been getting death threats in recent days. When asked about the tweet, Schmidt told the Inquirer, “We still have lots of work to do, and we can’t let anything distract us from getting it done.”