Trump Lawyer to Pennsylvania Judge: Nope, I’ve Got No Evidence of Voter Fraud

President Donald J. Trump has been aggressively pursuing voter fraud in the courts — but in Montgomery County, even his own lawyers admit there's no grand conspiracy afoot. 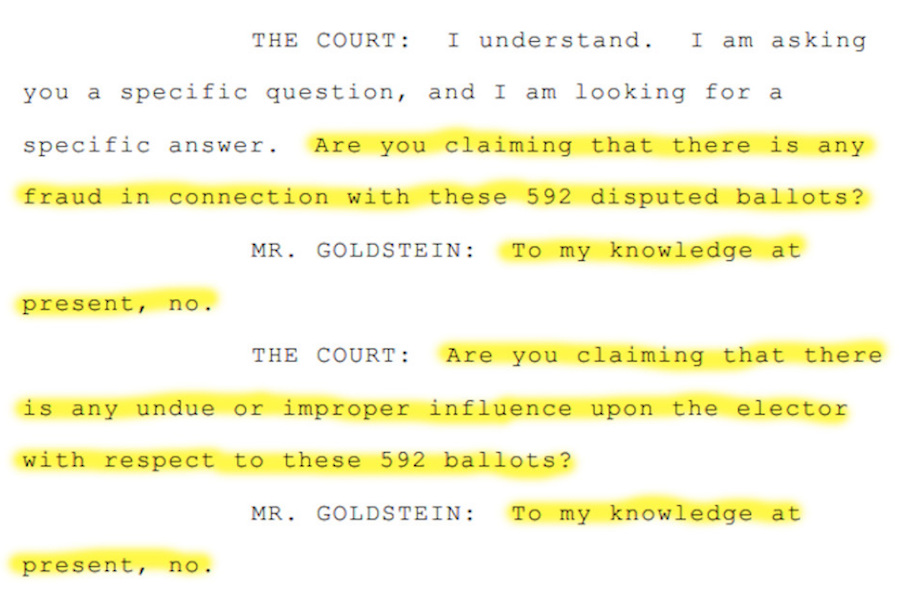 A portion of a transcript in a Pennsylvania election lawsuit in which a Pennsylvania judge asks a Trump lawyer if there’s actually any evidence of voter fraud. (Highlights added by Philly Mag)

You’re probably aware that unsurprisingly sore loser Donald Trump has dispatched his attorneys across America in an effort to reverse the results of the election.

Why, right here in Montgomery County, the Trump campaign and the Republican National Committee have filed suit against the Montgomery County Board of Elections in an effort to stop the county from counting mail in ballots. The complaint centers on 592 mail in ballots that the suit claims were counted but should not have been, due to irregularities or “deficiencies,” as the lawsuit puts it, on the outer mailing envelope.

In its response, filed in court on Monday, the Montgomery County Board of Elections insists that there was nothing actually wrong with those 592 envelopes and that the suit is just another example of the campaign challenging an election with no actual legal basis to do so. The response literally begins with the sentence, “Here we go again.” You gotta love it.

Jonathan Goldstein, the Hatfield-based attorney representing the Trump campaign, did his best to make some sort of logical argument in front of the judge hearing the case, referring to what the board was doing as a “scheme.” But the judge seemed confused as to whether the campaign was actually claiming voter fraud.

“In your petition, which is right before me — and I read it several times — you don’t claim that any electors or the Board of the County were guilty of fraud, correct?” asked the judge. “That’s correct?”

“Your Honor, accusing people of fraud is a pretty big step,” Goldstein replied. “And it is rare that I call somebody a liar, and I am not calling the Board of the DNC or anybody else involved in this a liar. Everybody is coming to this with good faith. The DNC is coming with good faith. We’re all just trying to get an election done. We think these were a mistake, but we think they are a fatal mistake, and these ballots ought not be counted.”

Given that Goldstein tried to dodge the exact question about voter fraud, the judge restated it.

“I understand,” he told Goldstein. “I am asking you a specific question, and I am looking for a specific answer. Are you claiming that there is any fraud in connection with these 592 disputed ballots?”

“To my knowledge at present, no,” Goldstein said.

“Are you claiming that there is any undue or improper influence upon the elector with respect to these 592 ballots,” queried the judge.

“To my knowledge at present, no,” was Goldstein’s reply.

In other words, there’s nothing to see here. But we’re going to make a stink about it anyway.

Similar cases are unfolding in other states and in federal court, and they sound like they are going the same way.

“You can’t go to court just because you don’t like the vote totals,” Ned Foley, an election law expert at Ohio State, told MSNBC over the weekend, according to this NPR article that sums up Trump’s various lawsuits over the election. “You have to have a legal claim, and you have to have evidence to back it up. And that’s just not there.”

And on Wednesday morning, the Atlantic, in an article perfectly titled “No Self-Respecting Lawyer Should Touch Trump’s Election-Fraud Claims,” put it like this: “To date, not a single one of these lawsuits alleging fraud has gone anywhere.”

But Trump himself is unconvinced, tweeting on Tuesday, “WE WILL WIN!” All caps his, of course.