On Saturday, the AP and TV networks called Pennsylvania for former vice president Joe Biden, pushing him over the 270 electoral-vote threshold. 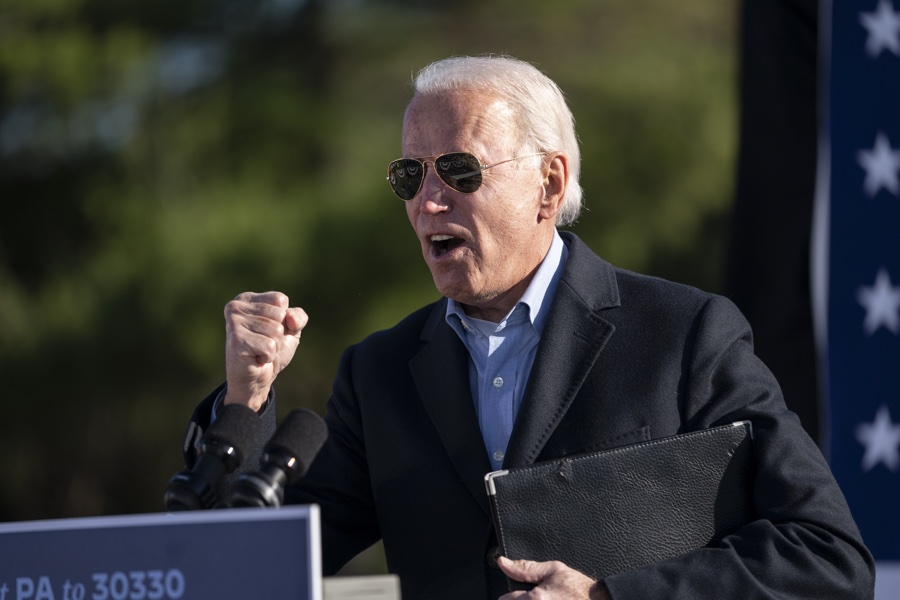 Five days later, the 2020 election results are in. Joe Biden is projected to win Pennsylvania and become the next president of the United States. (Photo by Drew Angerer/Getty Images)

Scranton native Joseph Robinette Biden Jr. is projected to be the next president of the United States. On Saturday morning, the Associated Press, CNN, and other TV networks called Pennsylvania for Biden, ending a peculiar and listless 24-hour period during which everyone except the networks that officially call the race seemed to realize that Biden had the votes he needed to win. With Pennsylvania formally in his column, Biden is now projected to capture 273 electoral votes, enough to cross the 270-vote threshold for a majority. Biden also has leads in Arizona, Nevada and Georgia, which are still counting ballots. If those results hold, Biden will ultimately earn 306 electoral votes — the precise number Trump won four years ago.

Biden’s victory caps a tumultuous election that has seen dashed Democratic hopes of an Election Day landslide and Senate takeover; illusory early Trump leads from the in-person Election Day vote; slow-counting swing states inundated with mail-in ballots; litigation; baseless Republican accusations of voter fraud; and, most absurdly, premature declarations of victory from the President, who tried to “claim” electoral votes of swing states via tweet. (Not how this works … ) In West Philly, the declaration of Biden’s election was immediately met with raucous cheers, blaring car horns, and exploding fireworks. Biden’s running mate, Kamala Harris, will be the first woman of color to serve as vice president in U.S. history.

Trump was in the lead in Pennsylvania on Election Day, but his advantage was skewed by a disproportionate share of the in-person vote. As more and more counties began to report their mail-in ballot totals, which generally favored Biden — in Philly, for instance, he’s won 92 percent of the mail-in vote — Trump’s lead slowly dissipated. By 9 a.m. Friday, Biden found himself in front, thanks to a drop of 30,000 ballots from Philadelphia. This was the much-ballyhooed “red mirage, blue shift” phenomenon in action.

Mail-in and provisional ballots are still being counted in Pennsylvania, but Biden currently leads Trump by 34,000 votes, or half a percent. Turnout was significantly higher than in 2016, with Trump exceeding his vote total by at least 340,000 and Biden surpassing Hillary Clinton’s by at least 419,000. Though the count continues, the networks have called the race for Biden because his lead is growing and the remaining ballots likely skew Democratic.

Trump doesn’t seem likely to accept the results of the election. In a press conference held at the White House on Thursday night, the President unleashed a barrage of so many lies that it would be nearly impossible to fact-check them all. His central claim boiled down to the patently false assertion that the election was rigged against him. Among other things, he claimed to have “won Pennsylvania by a lot,” despite the fact that hundreds of thousands of legally cast mail-in ballots had yet to be counted.

The press conference followed a day of Trump campaign lawsuits over the right of its surrogates to watch the ballot-counting process, along with dueling protests downtown at the Pennsylvania Convention Center, where Philly election officials have been counting ballots nonstop since Tuesday. A pro-Trump group assembled near the Convention Center to protest the counting of ballots, but it was soon dwarfed and drowned out by a group of pro-democracy counter-protesters, including Philly Elmo and at least two people dressed as USPS mailboxes, chanting, dancing, and carrying signs that read “Count every vote!”

The vote was indeed counted, and now we know that Biden is projected to have won Pennsylvania and thus the presidency. He did so thanks to a strong performance in the suburbs especially while also cutting into Trump’s advantage in parts of the Rust Belt that the President won in 2016. Biden carried all four of the Philadelphia collar counties by greater margins than did Clinton in 2016; he also managed to flip Erie County, in the northwest corner of the state — a longtime Democratic stronghold that voted for Trump four years ago. And he cut into Trump’s margins in conservative counties like Cumberland, just west of Harrisburg. It was a batch of mail-in ballots from Philly that ended up giving Biden the lead on Friday morning, but he’s actually running behind Clinton’s 2016 raw-vote total and percentage share here — though there are still more votes to be counted. Nationally, Biden was able to reconstruct the so-called “blue wall” of states — Pennsylvania, Wisconsin and Michigan — that in 2016 flipped to Trump by a total of 80,000 votes.

There was lots of speculation leading up to the election about whether Pennsylvania would be the “tipping-point state” to decide the Electoral College. In the end, it was, though really only because it managed to win the race between it, Nevada, Georgia and Arizona for which state could count its ballots least slowly. (That it’s taken five days to tally the ballots is entirely due to our state’s Republican leadership, which refused to pass legislation allowing the counting of mail-in ballots prior to Election Day.) Still, there’s a certain pride in being the tipping-point state, not to mention a certain poetry that it was Biden’s home state that proverbially brought the candidate home.

But the neat-and-tidy bow-tied poetry ends there. Trump’s apparent refusal to accept the results of the election was projected as a nightmare scenario just a few days ago, with pundits fearing the prospect of a second Bush v. Gore decision. And indeed, the President has promised to try and sue his way to victory. “All of the recent Biden claimed States will be legally challenged by us for Voter Fraud and State Election Fraud. Plenty of proof – just check out the Media. WE WILL WIN! America First!” he tweeted on Thursday. The only ballots that could reasonably be challenged in a legal fight in Pennsylvania are those that arrived after Election Day, and since Biden already leads Trump even without those ballots, his lead should be secure.

It’s still a nightmare that the President is trying to steal the election. But barring a successful coup, he won’t be president much longer, because Joe Biden has won.