"VOTE: A Window Exhibition in South Philly" opens on Iseminger Street this Friday. 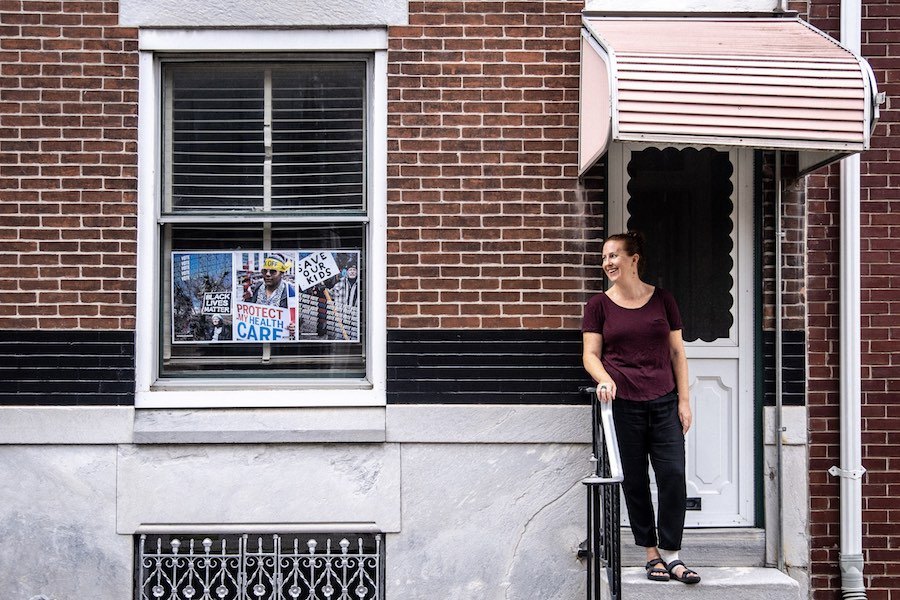 South Philly artist Maria Möller, who is hosting an art exhibit featuring her get-out-the-vote signs on her block beginning on Friday (Photo by Matthew Scott Barber)

South Philly artist Maria Möller has shown her site-specific and public art works in galleries, vacant lots, libraries, motels and all sorts of other other venues in Philadelphia and the surrounding area. And as far away as Colombia, South America. But for her next exhibition, Möller barely has to leave her house.

On Friday, October 2nd, the Temple grad is set to open “VOTE: A Window Exhibition in South Philly” all along the 1600 block of South Iseminger Street, an alleyway that’s about two blocks in one direction from the singing fountain on Passyunk Avenue and two blocks from Broad Street in the other. Möller bought her house on the block in 2003.

The exhibition features photographs that Möller captured at Philadelphia protests in 2017 and 2018, like the Women’s March and the anti-Brett Kavanuagh rally. Möller worked with Conshohocken-based graphics designer Luci Morreale to transform her protest photos into get-out-the-vote signs. 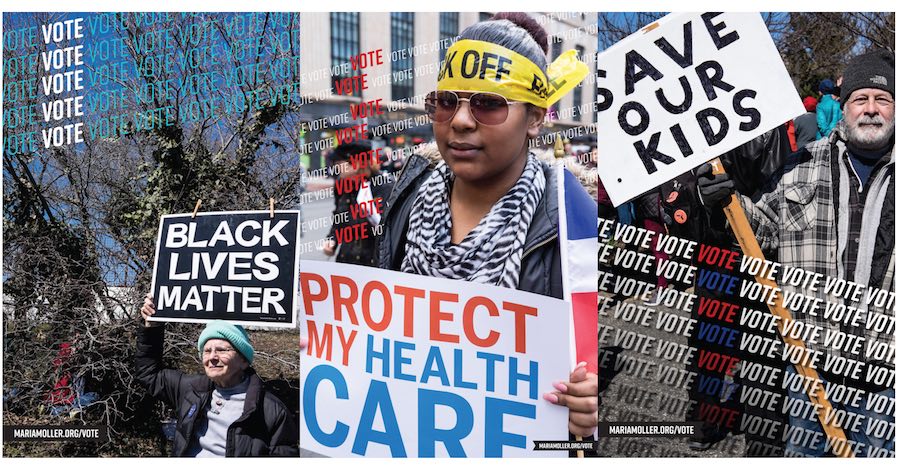 “The idea for this came from sitting outside on the weekends with my neighbors,” Möller tells me. “We realized we could do a whole window-front exhibition up and down the block, all adjacent to one another. It’s been really interesting to see how the community has come together on this through months of shared trauma.”

Möller plans to give away posters to anybody who stops by her block’s exhibition on Friday night from 5pm to 7pm. You can also print your own posters from high-resolution files found on her website.

“When I was explaining my goals to Luci, I said I wanted people to first notice the messages on the protest signs, then see the person protesting, and then hear them urging you to vote,” Möller explains. “As in — ‘this is what we need, this is who I am, and this is how we get it.'”

Given the fact that South Philadelphia hasn’t exactly been an undivided front in recent months, I asked her if she had any concerns about mounting such an exhibition on her block. Might she not bring unwanted attention to her and her neighbors?

“I don’t feel the least bit uncomfortable,” she says. “We have lots of Black Lives Matter posters on our block already. Keep in mind that I’m right near Passyunk Square. But even if I lived in a different neighborhood, this is the most important election of our lifetime. We have to push back against intimidation. If we can’t put posters in our windows, then they’ve already won.”