Meanwhile, the Christopher Columbus statue just over the bridge in Camden, New Jersey has been removed. 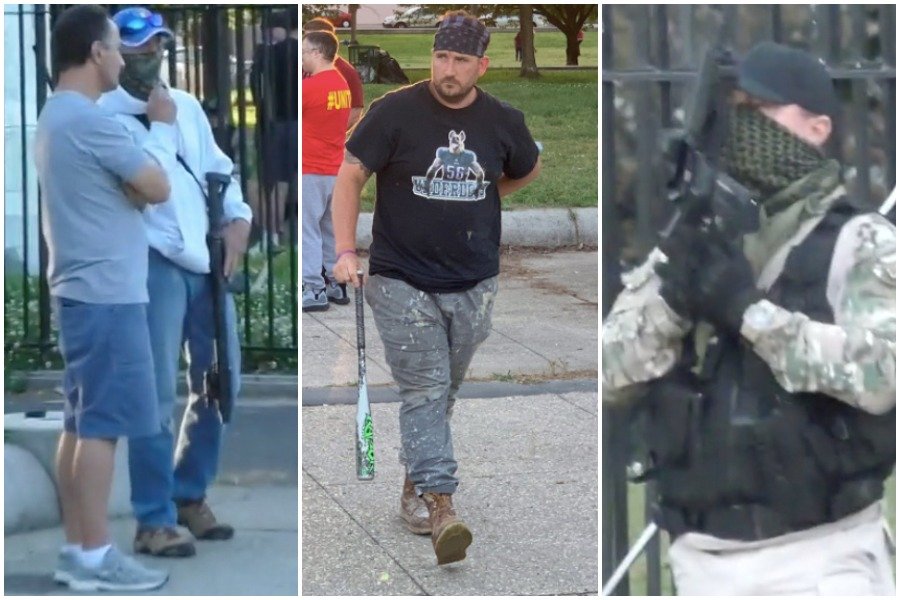 Men armed with guns and bats patrol the area around the Christopher Columbus statue at Marconi Plaza in South Philadelphia over the weekend. (Images via Unicorn Riot/Creative Commons)

Here in Philly, we’ve got men armed with bats, guns and hatchets “protecting” the Christopher Columbus statue in South Philadelphia’s Marconi Plaza, a small park at the intersection of Broad Street and Oregon Avenue.

The first reports of armed individuals “patrolling” in the park emerged on Saturday. Protesters say they were harassed and, in some cases, assaulted by some of the statue’s defenders. It didn’t take long for police to show up and put barricades around the statue. And on Sunday, some pro-statue residents marched to a house where they believed Mayor Jim Kenney to be.

More on that from 6ABC:

And here’s a wild point-of-view video of residents going after somebody associated with Unicorn Riot, a self-described “decentralized, non-profit left-wing media collective”:

We lost track of how many times we were assaulted in/around Marconi Plaza by vigilantes tonight.

When cops did step in, they made it clear they saw us as the problem and repeatedly tried to make us leave (which would obviously negate our ability to document vigilante activity) pic.twitter.com/wsDEQsz3Pv

Philadelphia District Attorney Larry Krasner took to Twitter on Sunday to address some of the incidents surrounding the Christopher Columbus statue.

“Hey, bat-wielders,” he wrote. “Saying you are ‘defending’ something doesn’t prove you really are. And using a bat–or anything else–for an illegal purpose (such as assaulting or threatening or harassing people) is a criminal act. Prosecutors and police will uphold the law in Philly, consistent with their oaths, against criminal bullies. So save your bats for a ball game. And save your hatchets for chopping wood. We remain the City of Brotherly Love and Sisterly Affection.”

“We are aware of the groups of armed individuals ‘protecting’ the Columbus statue in Marconi Plaza,” Kenney tweeted. “All vigilantism is inappropriate, and these individuals only bring more danger to themselves and the city.”

Meanwhile, the city says there are currently no plans to remove the statue.

You Now Have to Pay to Park In Center City Again

In mid-March, amid the coronavirus outbreak, the much-loathed PPA announced that it was “relaxing” parking enforcement in Philadelphia. Basically, you could park in any metered/kiosked spot for as long as you wanted without getting a ticket.

Here are the boundaries of the current enforcement zones:

And as of next Monday, June 22nd, enforcement will return citywide.

The PPA suggests that drivers use the agency’s MeterUP app to pay for parking, since it is a contactless payment method. Oh, and if you were supposed to appear in “PPA court” between March 17th and May 31st, no, the PPA hasn’t forgotten about you. The PPA says that you should be getting a notice of a new hearing date in the mail soon. Good luck.

The Green Zone Inches Closer and Closer to Philadelphia

Pennsylvania Governor Tom Wolf has announced that more counties will shift into the Green Phase of the coronavirus reopening plan this Friday, June 19th.

The closest of those to Philly are Dauphin and Schuylkill counties. As of this Friday, 54 of our 67 continues will be Green.

So what does going Green mean in Pennsylvania these days? According to Wolf’s orders, gatherings of up to 250 people are allowed. Restaurant dining rooms, gyms, hair and nail salons, and entertainment venues are allowed to reopen but at 50 percent of their capacity.

No word on when Philly or the surrounding counties will shift to Green. But I’d place a small and totally uneducated and unscientific wager on the weekend of July 4th. Hey, it doesn’t hurt to dream, right?