Current efforts by the city to force our most vulnerable residents from the Parkway are starting to feel like a recipe for disaster — and hark back to one of Philadelphia's darkest days. 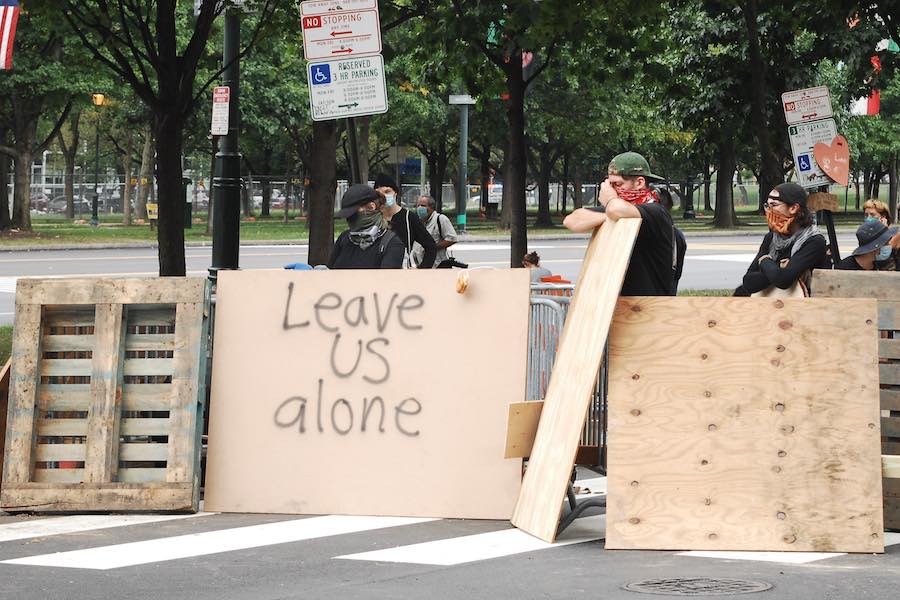 A barricade near the Parkway encampment in Philadelphia (Getty Images)

Right now, a group of vulnerable and displaced people is actively defying the city’s demand to relocate as neighbors complain about their presence.

Thirty-five years ago, the city called for the eviction of a group of Black residents who were considered social pariahs in their neighborhood.

Back then, the Mayor’s decision was to drop a bomb — one that would ultimately kill most of the group — because previous efforts to negotiate had stalled.

Since current talks to resolve the encampment crisis in Philadelphia show no sign of resolution, I fear we may be inching toward a tragedy not unlike the MOVE bombing.

On May 13, 1985, 11 people, including five children, were killed when the city authorized the bombing and burning of a Black neighborhood in West Philly. This was a state-sanctioned attack on a Black liberation group known as MOVE, which was unwanted by largely middle-class Black neighbors who complained to the city about trash problems, confrontations, and the activists shouting political messages through their bullhorns.

After talks urging the group to evacuate the neighborhood were unsuccessful, the city’s bombing led to the burning of 61 surrounding houses, leaving 250 Philadelphians traumatized and homeless. Surrounding families were impacted, and the spirit of Osage Avenue was decimated. No city official was ever held responsible for one of the most horrific days in the city’s history. The sole person arrested and charged that day was MOVE member Ramona Africa, the only adult who survived the bombing. She served seven years in prison for her defiance.

We are currently witnessing parallels in the Parkway encampment crisis that is shaping up as a fight between housing-insecure Philadelphians and city government. Since early June, 100 to 150 occupants in tents have taken over the Ben Franklin Parkway as a necessary protest to support the rights of displaced residents, to confront the ills of gentrification and inadequate housing, and to further the message that the lives of Black and brown people in this city matter. But while nearby residents empathize with the motives, they’ve continued to complain about what they perceive to be trash and human excrement, drug use, and other public indecencies. Just like the middle-class residents of Osage Avenue in 1985, these well-off residents want the city to remove these individuals.

I’ve listened to several Philadelphians who say they want the situation to end peacefully. But when I challenge them with the fact that the current residents of these encampments aren’t satisfied with the city’s alternative proposals and resources, some just say that something needs to happen. City officials claim the tents and public gatherings violate city laws prohibiting camping and that such actions on the Parkway threaten public health, safety and welfare. Last Friday, the city issued a final warning to occupants that they must evacuate.

But what if they don’t? What will actually happen then?

Right now, intersectional activists who have been protecting the encampment at the Parkway have pledged that they “will not go quietly” as negotiations with the city have fallen flat. They’ve tried offering Mayor Jim Kenney an olive branch, urging him to reconsider a brunch invitation he has rejected. At this point, it’s not a question of whether this will get violent, but when. Should police be tasked with removing these individuals from what has been their home for several weeks, we would be foolish to forget the department’s capacity for excessive force.

Remember: This is the same police force that recently got caught tear-gassing peaceful protesters and initially lying about their need to do so.

I don’t for one second trust that the safety of our city’s most vulnerable residents will be taken into consideration by law enforcement. The activists who are committed to helping protect them — in a city that continues to tolerate ridiculous tax abatements benefiting greedy developers while pricing others out of stable housing — are heroes standing up for Philadelphians who have been neglected by the rest of us. These encampments are a result of a city government that hasn’t taken our growing poverty seriously and now has the audacity to try to punish those who are victims of that government’s incompetence.

What will happen at the encampments will be nothing short of a human rights crisis, just like the MOVE bombing, unless we speak out collectively against this. People’s lives mean more than property and buildings. It is mostly Black and brown residents living in those tents, and for those who protest against the injustice and discrimination such citizens face, housing insecurity and displacement are part of the marginalization that should be eradicated.

To be silent right now is to be complicit with the blood that may spill if Mayor Kenney allows one of the most aggressive police forces in the nation to act on the city’s behalf. Tell him we don’t want another tragedy akin to the MOVE bombing on our hands. Give the occupants what they want. They deserve it.