If Philadelphia Can’t Apologize for the MOVE Bombing 35 Years Later, How Progressive Are We?

Restorative justice is a bedrock aspect of progressive values. How our local government chooses to address instigating one of the darkest days in our city's history has now become a litmus test. 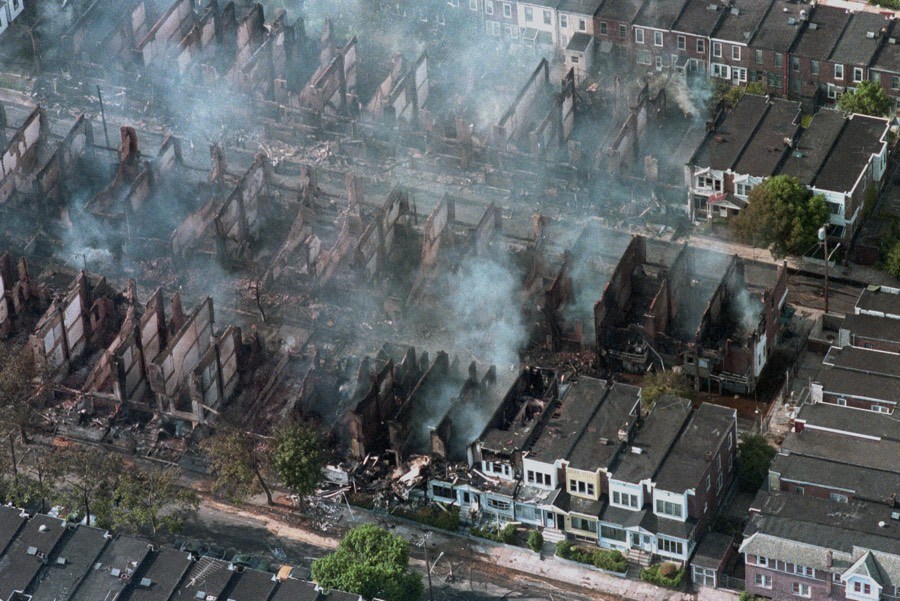 35 years later, there’s still no official MOVE apology from the Philadelphia government over its role in the bombing and burning of a city block. Photo: Bettmann/Getty Images

On May 13, 1985, 11 people, including five children, were killed during a city-authorized bombing and burning of a black neighborhood in West Philadelphia.

The state-sanctioned attack on a black liberation group known as MOVE also led to the fiery destruction of 61 surrounding houses, leaving 250 Philadelphians traumatized and homeless. Families were forever impacted as the spirit of Osage Avenue was decimated. No one responsible for one of the most horrific days in the city’s history has ever been arrested or faced charges.

As we are reminded each May, the world will never forget watching the City of Brotherly Love drop a bomb on its own civilians.

Somehow, 35 years later, those impacted by the infamous MOVE bombing have yet to receive a formal apology from our city government.

Earlier this week, Mayor Jim Kenney said that he had no plans to issue an apology for the MOVE bombing. City Council President Darrell Clarke declined to comment on the matter. It should be noted that neither Kenney nor Clarke has taken part in reconciliation talks that have been going on for two years between those from MOVE and city officials (such as then-DA Ed Rendell and former mayor W. Wilson Goode Sr., who authorized the bombing during his tenure).

“There can never be an excuse for dropping an explosive from a helicopter onto a house with men, women and children inside and then letting the fire burn,” Goode recently wrote in an apologetic op-ed for the Guardian. “After 35 years, it would be helpful for the healing of all involved, especially the victims of this terrible event, if there was a formal apology made by the City of Philadelphia.”

So far, Councilmember Jamie Gauthier, whose district encompasses Osage Avenue, has been the only sitting Councilperson to aggressively push for an official resolution from City Council to apologize for the MOVE bombing.

“It’s long overdue,” Gauthier told the Inquirer. “This was a tragic and atrocious human-rights tragedy committed by our government against its own people.”

Much has been said about the city’s progressive turn during the Kenney administration. But if Philadelphia truly wants to be a progressive city, our government must finally reckon with its violent disregard for human life and diverse communities on May 13, 1985. Some would call an apology the bare minimum required to move forward, and, yes, it would be just that: the very first step. Our current mayor’s apparent nonchalance about this leaves Philly living in the hypocritical shadows of our past, bound by the guilt and shame that come from killing our own civilians.

It’s been 35 years. How can this city still have never officially apologized? Philly has since supported gender-neutral bathrooms, fair workweeks, cannabis decriminalization, banning the box on job applications. Apologizing for bombing a neighborhood in the ’80s should be common sense. Our city boasts that it’s a “sanctuary” for outsiders. Our mayor defies the bigotry espoused by our current Commander-in-Chief. And yet we’re the height of hypocrisy if we don’t hold ourselves accountable for the trauma we inflicted in our own backyard.

The city was wrong then, and continuing to withhold an apology is the exact opposite of restorative. As our government’s stubbornness endures, I fear it could all happen again: There is no formal acknowledgement that we’ve learned from the past. When you know better, you’re supposed to do better. Maybe that doesn’t apply to our city’s current leaders.

While many Philadelphians — including the descendants of the MOVE members who lost their lives — battle with another human tragedy, the least our city could do is apologize for the things it could have — and should have — done better. It’s times like these when institutions and leaders show you exactly who they are. One can only hope that ours aren’t all smoke and mirrors.