Wawa’s Newest Concept? A Store You’re Not Allowed to Enter 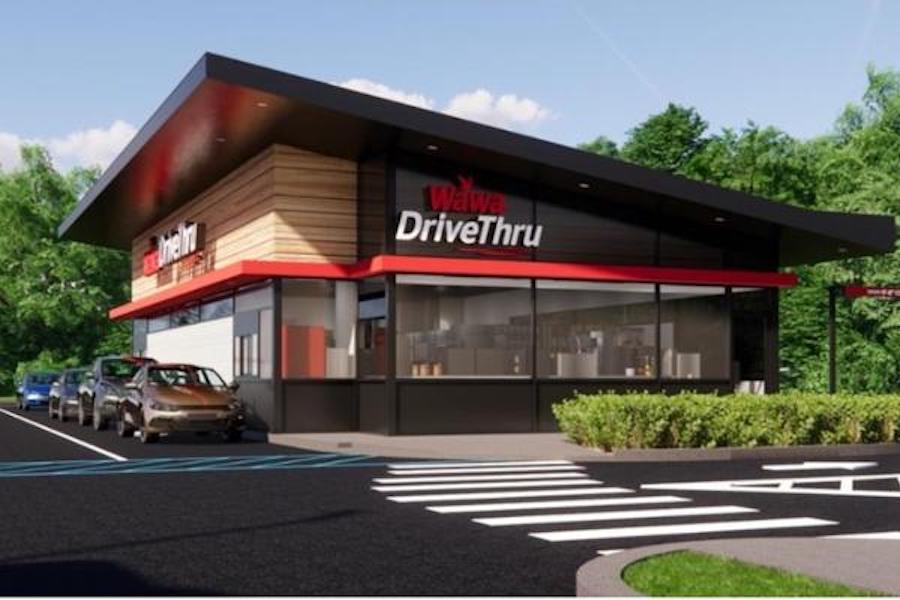 A rendering of the world’s first Wawa drive-thru store that you won’t be allowed to enter. (Image courtesy Wawa)

You know those quirky Swiss Farms stores where instead of going inside, you pull up to a drive-thru window and buy your groceries, from eggs, milk and bacon to DiGiorno pizzas and frozen chicken nuggets, right from the window? Well, Wawa’s newest concept is a lot like that. The convenience-store chain is set to debut the world’s first drive-thru-only Wawa later this year.

Construction on the Wawa drive-thru shop is slated to begin any day now at the intersection of West Trenton and Pine Grove roads in Falls Township. Yeah, I had no idea where that was, either. It’s basically right outside Levittown and minutes from the infamous old Tullytown landfill.

The company says the Wawa drive-thru should open by the end of 2020. You’ll be able to get your coffee, Sizzlis, Shortis, and many of your other favorites without getting out of your car.

“It is critical to provide new ways to access Wawa, increase convenience and provide new options for service,” a company representative said in a statement on Thursday. “We are hoping to learn from the layout, workflow and traffic flow at this location, as we continue to explore alternatives for longer-term application to our stores post-COVID-19.”

While this new Wawa is drive-thru only, Wawa is also testing a new concept for a “regular” Wawa that also has a drive-thru window. That store is under construction in Burlington County, New Jersey.

It’s cool that Wawa is trying to figure out ways to adapt in this world of pandemic pandemonium. I personally can’t imagine waiting in a long line of cars just to get my morning coffee. But hey, that’s me.

Can We Just Call It Quits On the Phillies Season Already?

That’s the sound of the attempt to start a Phillies season this year.

Last weekend, the Phillies played the Miami Marlins at Citizens Bank Park. Then we learned that Marlins players tested positive for COVID-19, so the Phillies-Yankees games that were scheduled for this week were postponed while the Phillies underwent testing. No Phillies players have tested positive (yet), but other members of the organization have, so this weekend’s Phillies games at Citizens Bank Park have also been postponed. And Phillies fans are all left wondering: What’s next?

Here’s a brilliant idea: Just do the right thing, the classy thing, and voluntarily opt out of the season. It’s seemingly inevitable that players will test positive at some point and we’ll just have to go through this postponement mess again, all while putting other people at risk.

It’s not like the Phillies were looking great to begin with. And the whole cardboard-cutout-fans-in-the-stands thing is about as lame as when Wawa decided it was a good idea to sell Taco Bell burritos. Remember that?

Just scrap the damn season and hope the world is in a different place by March 2021.

The Philly Trash Problem Might Actually Be Resolved Soon

It’s one of the most basic city services: garbage pickup. But over the past several months, city trash has been sitting on the curb for days and days waiting for the garbage truck to come by. Sometimes that truck is a day or two late. Sometimes it’s four or five days late. And sometimes it doesn’t show up at all.

Mayor Kenney has blamed this colossal failure on all sorts of things, including:

That’s all well and good, but at the end of the day, the trash needs to be picked up, or people start going nuts. I’m actually kind of shocked that somebody hasn’t loaded a street’s trash into a U-haul and dumped it outside Kenney’s home, not that I’m suggesting anybody do that, of course.

Fortunately, the city finally seems to have a plan to get this done: hiring temps. What a concept!

So when will trash pickup really get back to normal? A couple of weeks, according to Kenney. We’ll see.