Plus: South Jersey gym owners finally arrested for illegal reopening. And so much for the start of MLB. 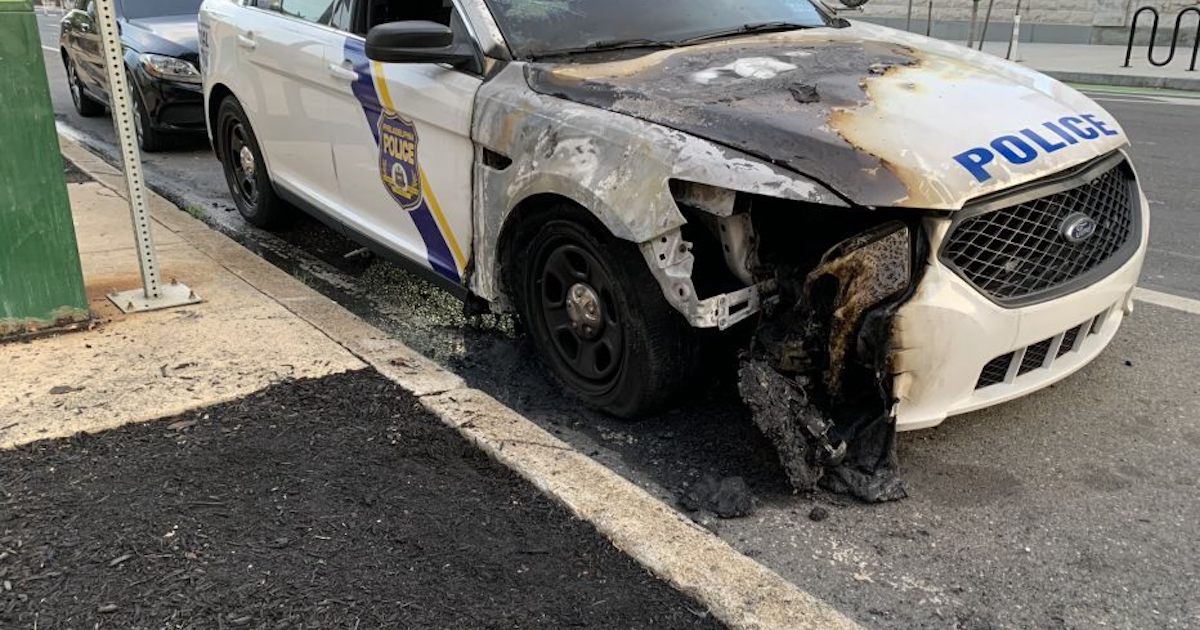 One of the police cars set on fire in Philadelphia overnight. (Image via Fox 29; video embedded below)

It was about a week ago when President Trump threatened to unleash his storm troopers on cities like Philadelphia, the way that he has in Portland, Oregon. And based on last night’s events here, I can just imagine him rubbing his little hands together and saying, “See, I told ya they were gonna need us.”

After a relatively quiet period in the Arson of Philly Police Cars Department and, well, of arson in general in the city, the Philadelphia Police Department is investigating after four Philly cop cars were set on fire overnight.

According to police, the arsonist struck between 1:40 a.m. and 2:30 a.m. on Monday morning in the University City and Center City areas.

At 1:40 a.m., a police car just outside the 6th District police headquarters was set on fire on the 1000 block of Vine Street. Then, at 1:54 a.m., the arsonist hit a police car at 7th and Chestnut streets. After that, there were two incidents within minutes of each other just before 2:30 a.m. in University City. The first was outside police headquarters on the 3900 block of Chestnut Street, and the second was on 39th Street between Spring Garden Street and Powelton Avenue.

None of the police cars set on fire were occupied, and no injuries have been reported. The suspect is described as a white male wearing a flannel shirt, carrying a backpack and riding a white Cannondale bike. Police say that he used a Molotov cocktail in at least one of the incidents.

Now, if you’re thinking that it might be a good idea to set a cop car on fire, keep in mind the case of Lore Blumenthal, the 33-year-old Germantown woman charged by the feds with setting two cop cars on fire outside of City Hall on May 30th. She’s still not out on bail, and she faces a maximum of 80 years in prison if convicted on all charges.

Here’s some video from Fox 29:

So, the Phillies finally played some real baseball games at Citizens Bank Park over the weekend after their coronavirus shutdown, but it didn’t go so well.

Oh, yeah, the Phillies looked pretty bad. And they lost the series to the Miami Marlins. But that’s the least of their problems.

At least several (some reports are saying more than a dozen) Marlins players have reportedly tested positive for COVID-19, and instead of traveling from Philly back home for their own home opener, the Marlins are stuck here awaiting further testing. To add insult to injury, it’s actually about 10 degrees hotter in Philly than in Miami. Sorry, Marlins.

Of course, since the Marlins players have tested positive, Phillies players are also now being tested. And this has forced the team to postpone its Monday night game against the Yankees.

It remains to be seen how all of this will, er, play out, but it’s certainly not the way that Major League Baseball was looking to kick off the season.

The Right-to-Reopen Movement has its attention firmly fixed on South Jersey once again thanks to Atilis Gym, that rogue gym in Bellmawr, New Jersey that repeatedly defied orders to stay closed amid the coronavirus shutdown.

On Monday, police arrested Atilis Gym owners Ian Smith and Frank Trumbetti and charged them with contempt, obstruction, and “violation of a disaster control act.” This came after weeks and weeks of back and forth with authorities. On Friday, a judge issued an order for the owners to vacate the premises, but prosecutors say that several people were observed using the gym over the weekend, hence the arrest.

Police released Smith and Trumbetti shortly after their arrest.

Meanwhile, the Atilis Gym legal defense GoFundMe is up to more than $110,000. This is probably a good time to point out that a $110,000 donation to Philabundance would buy 220,000 meals for hungry people. But, hey, who’s counting?