The Feds Are Playing Hardball With Accused Arsonist Lore Blumenthal

They want to keep her locked up until trial, deeming her a “flight risk.” Her attorney calls the situation “absurd.” 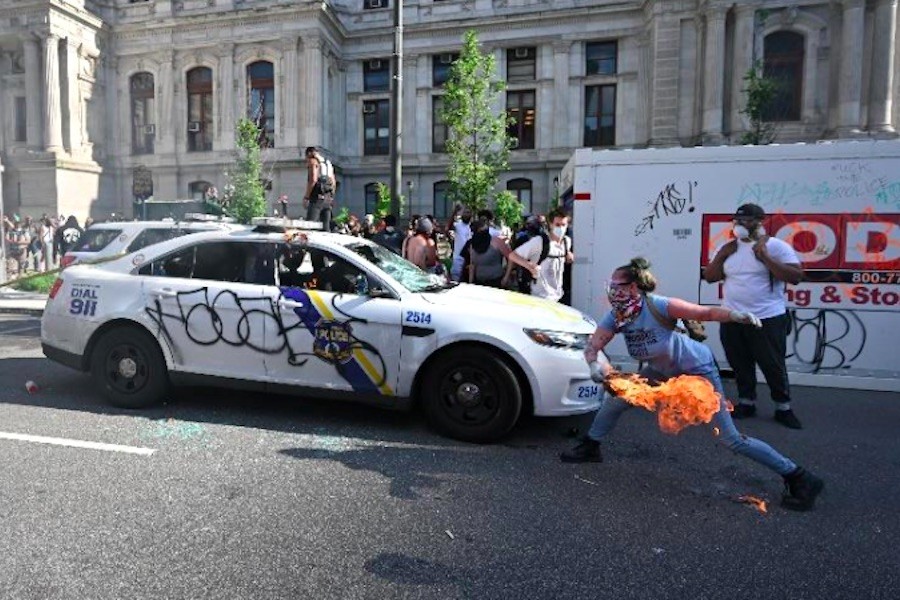 The FBI says this photo shows 33-year-old Germantown woman Lore Blumenthal lighting a Philadelphia police car on fire during a protest outside of City Hall on May 30th. Blumenthal remains in federal custody, and prosecutors want to deny her bail and keep Blumenthal there until trial. (Image via FBI affidavit)

The Feds Want to Keep Lore Blumenthal Locked Up Until Trial

Back on June 1st, as mass protests ripped through the streets of Philadelphia and across the nation in the wake of the killing of George Floyd, the United States Attorney for the Philadelphia region held a press conference.

“I implore any protestors in Philadelphia to behave peacefully,” said William McSwain. “I also issue this warning: if you engage in violence and destruction and we have federal jurisdiction over your crime, you will be prosecuted in federal court to the fullest extent of the law. That is a promise.”

McSwain appears to be doing his best to make good on that promise.

A couple of weeks ago, I told you that the FBI had arrested 33-year-old Germantown resident Lore Blumenthal, charging her with lighting two Philadelphia police cars on fire outside of City Hall during a May 30th protest.

And because federal sentencing guidelines can be downright insane (keep in mind this is a system that will try to put you away for a minimum of ten years merely for introducing somebody to a drug dealer) Blumenthal could face as many as 80 — yes eighty — years in federal prison if convicted on all charges. Even though no one was injured as a result of those fires.

But McSwain wasn’t done with his severe attempts to fulfill his promise. Far from it.

On Monday, I checked into the status of Blumenthal’s case, expecting her to have been released on bail already. After all, men accused by the feds of exploiting young children through child pornography are commonly released on bail in a matter of days. So certainly this 33-year-old unemployed massage therapist would be home by now. Right? Wrong.

McSwain, who was nominated for his job by Donald Trump in 2017, is going all out. He wants to deny Blumenthal bail and keep her in federal detention until trial. And the way things move in federal court, that trial could wind up taking place in late 2021. At best.

McSwain and Blumenthal’s attorney Paul Hetznecker (yes, he’s one of the lawyers organizing a massive lawsuit against the city over the use of tear gas on protesters) have been going back and forth in federal court about Blumenthal’s detention.

Court documents show that McSwain has argued that Blumenthal should be denied bail because she is a “flight risk.” He claims that Blumenthal “has demonstrated through her actions that she has no willingness to comply with the law or the lawful requirements of the justice system.”

McSwain points, in part, to her actions when the FBI showed up at her Germantown home. In short, she didn’t want to open the door and then ran upstairs when the FBI broke it down.

And then there are Blumenthal’s ties to Iceland, which is, perhaps surprisingly, on the list of countries that don’t cooperate with the United States when it comes to extradition. According to court filings, Blumenthal has a boyfriend in Iceland, and she’s visited there six times in the last year.

“They are acting like she is a danger to the community,” says Hetznecker. “She is not.”

Hetznecker’s filings in opposition to McSwain’s have been filed under seal, for reasons that he would not discuss. But McSwain’s responses in court to those filings make clear at least part of Hetznecker’s argument to the court for release.

Blumenthal’s doctor wrote a letter stating that she suffers from rapid heartbeat, anxiety, insomnia, and PTSD, among other conditions. But prosecutors have countered that she can receive treatment for all of those conditions while in federal custody, and they note that Blumenthal told authorities upon her arrest that she isn’t currently taking any medications.

Blumenthal also submitted letters to the court in support of her release. But prosecutors point out that some of these letters are dated June 16th (or they’re not dated at all), which was one day before the allegations against Blumenthal became public. “Thus,” write prosecutors, “many of these individuals provided letters with no background on what the defendant has been charged with.”

Prosecutors go on to note that “several letters specifically mention that the author does not know why the defendant has been arrested, but they were asked to provide a letter of support.”

“I was requested to draft this letter by the sister of Lore Blumenthal via message in the middle of the night,” reads one such letter, according to the feds. “I wasn’t aware of the details, even while writing this I am unaware of many key points, regardless here I sit.”

“In this most combustible moment, the actions of the defendant, broadcast on live television, are profoundly dangerous,” wrote McSwain in a filing last week. “She took advantage of peaceful protestors, in their midst, to dramatically set fire to two police vehicles. She acted with evident intent, arriving on the scene wearing heat resistant gloves. She not only destroyed valuable and essential public property, but risked harm to everyone in the crowded vicinity, citizens and police officers alike, while seeking to add an example of mayhem to the protestors’ legitimate political messages. A person who engages in destructive violence in the midst of mass, legitimate protest presents a particular danger to the community at this moment in time, and should be detained to protect the community.”

Hetznecker tells Philly Mag McSwain’s position on Blumenthal is “absurd” and that he’s hoping for a final court ruling regarding her pre-trial detention later this week.

About Those Atlantic City Casino Reopenings…

What a difference a day makes.

On Monday, I wrote that New Jersey was allowing Atlantic City casinos to reopen this Thursday, July 2nd in advance of what would normally be a bountiful Fourth of July weekend at the Jersey Shore. But then things sort of fell apart from there.

Later on Monday, New Jersey Governor Phil Murphy announced indoor dining in New Jersey — also set to return at limited capacities on Thursday — was being put on hold due to the coronavirus crisis. And then this news: no smoking, no drinking, and no eating at all in any casino. So yes, the casinos are allowed to open, but who wants to go to a casino and not drink, smoke or eat?

While some casinos still plan to reopen with those restrictions in place, Atlantic City’s most successful (by far) casino, the Borgata, has canceled reopening plans.

“We respect the Governor’s decision to postpone the reopening of indoor dining in New Jersey to protect the public,” wrote the Borgata in a statement. “Given this decision, our property Borgata Hotel Casino & Spa in Atlantic City will remain closed. Our guests expect a special experience when they come to our property and if we cannot provide that level of hospitality, we feel it best that we remain closed until such time that the Governor lets us know it is safe to offer food and beverage. The health and safety of our employees and guests are at the center of all that we do, and we regret that, at this time, we are unable to welcome back the thousands of employees who are anxious to return to work. We look forward to a time when it is safe to welcome everyone back.”

Have You Been to Delaware’s Beaches Lately?

If you’ve spent any time on Delaware’s popular beaches lately, the state is advising you to get tested for COVID-19. This comes after a spike in cases in the Rehoboth and Dewey beach last week.

“We know some of the positive persons have been at parties recently, potentially transmitting the virus to others who may still be here or may have returned to their homes in other counties or states,” said Karyl Rattay, Delaware’s director of public health. “We’re also concerned by our own staff’s observations in the beach area and pictures seen on social media of people not wearing face coverings or social distancing while they are out and about, including at bars and restaurants. Make no mistake: continuing this behavior is a recipe for disaster. It is a sure way for us to end up with widespread infection that ultimately may not be contained to the beach area.”

Well, it’s a good thing that Hamilton is coming out on Disney Plus this weekend. Maybe just watch that over and over again while eating a hot dog and potato salad alone on your couch? I dunno.