The not-so-slow lurch of authoritarianism gets one step closer to Philly. Plus: Fauci's coronavirus pessimism and signs that another Hollywood A-list movie is on its way to shoot in Philly. 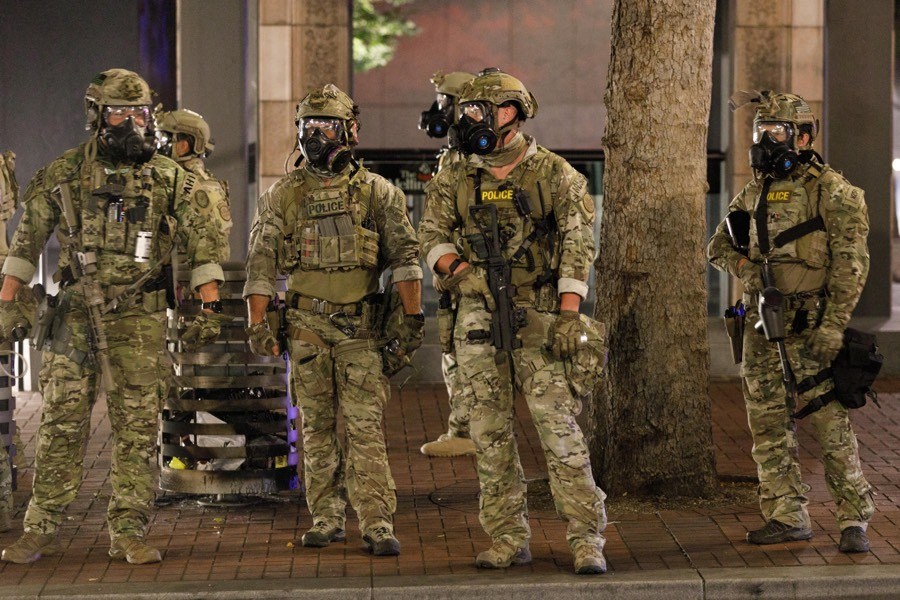 Federal law enforcement officers in Portland on July 21st. Trump says they could be coming to Philly next. (Photo by John Rudoff/Anadolu Agency via Getty Images)

Krasner to Trump: Bring Federal Agents to Philly and We May Charge Them

In response to protests over police violence toward Black Americans, President Trump suggested during remarks at the White House on Monday that he was considering sending a battery of heavily armed federal law enforcement officers to quell those demonstrations — including in Philadelphia. (Trump has already dispatched officers to Portland and pledged to do so in Chicago as well.)

The news was promptly denounced by local officials here in Philly. District Attorney Larry Krasner released a statement with the following warning: “Anyone, including federal law enforcement, who unlawfully assaults and kidnaps people will face criminal charges from my office. At trial, they will face a Philadelphia jury.”

Meanwhile, Mayor Jim Kenney said that the city had received no formal notification that federal police were on the way, but that his administration “would use all available means to resist such an abuse of power.”

There might be little Kenney could do if Trump actually means what he says. The Mayor of Portland has condemned the federal presence in the city but has been powerless to do anything about it. In the past few days, those “law enforcement officers” — in quotes because they are more like military troops, carrying no identification and displaying little interest in anything other than escalating the situation with guerrilla war cosplay — have shot tear gas and rubber bullets at demonstrators, thrown protesters into unmarked vans (as Krasner alluded to) and in one instance have beaten and pepper-sprayed a Navy veteran. The effect has only been to strengthen the resolve of the protesters and increase their numbers.

You can understand why politicians in Philly would prefer similar scenes not unfold here. (Though it should be said that, in truth, the scenes weren’t so different when Philly Police were in charge of the protest response.) The city’s resistance to the federal government is another example in a long list of grievances against the Trump administration. Kenney has already proclaimed Philadelphia a sanctuary city, refusing to provide federal immigration officials information for deportations. Meanwhile, Krasner has been fighting his own ongoing jurisdictional battle with the feds. And while Krasner has angered some protesters by not agreeing to drop all protest-related charges, he hasn’t gone as far as Trump-appointed U.S. Attorney Bill McSwain, who’s currently bringing charges against a protester who set fire to an unoccupied cop car, injuring no one. If convicted, that protester faces a mandatory minimum sentence of seven years, and could face up to 80 years in prison.

The most important thing to keep in mind regarding Trump’s authoritarian threat — and yes, Trump discrediting lawful protesters as anarchists who hate America and sending quasi-military forces to U.S. cities can be reasonably described as authoritarian — is that there is not actually any out-of-control civil unrest to quell here in Philly. But then that was never really the reason for this potential show of force, was it?

Fauci to Philly Cancer Organization: “No End In Sight” for Coronavirus

And now we turn to the parallel crisis engulfing American life. On Monday, the Centers for Disease Control reported another 63,000 new coronavirus cases nationwide. In Pennsylvania, the state department of health’s most recent tally reports 683 new cases, bringing the one-week average to 844 cases — up 13 percent from the week before. And in Philly, the health department reported a three-day new case total of 433. That brought the seven-day average for new cases to 125, up from 107 the week before.

While the trends in Philly are not dire, there’s still plenty of reason to be pessimistic, according to the federal government’s top doc Anthony Fauci. Fauci said as much during virtual remarks given to the American Association for Cancer Research on Monday, running through recent national case totals while concluding that there is “essentially no end in sight.” Of course we knew most of that already.

LeBron James Is Coming to Philly (Sort Of)

The Lakers star isn’t coming to Philly for basketball reasons — at least not on-court basketball reasons. But Variety reports that James is a co-producer on a new Netflix series called Hustle, apparently about a basketball scout who gets fired and redeems himself by finding a hidden gem talent abroad. Adam Sandler, who recently played a gambling- and basketball-obsessed, well, hustler, in the film Uncut Gems, is set to star in the movie.

So how do we know Hustle is going to be set in Philly? A Philly gossip site Wooder Ice (yes, really) caught an ad from Greater Philadelphia Film Office seeking crew members for a “new Netflix feature” that will shoot in Philly from September through December of this year. The feature remained unnamed in the ad — until it got to the email address, which includes the title Hustle. The Film Office confirmed the ad is indeed for the James and Sandler film.

Who knows how the pandemic will affect shooting schedules, but if the film does in fact come our way, we hope LeBron makes a pit stop here to check out the set. As you may know, lots of film stars have been shooting around town recently, and if James likes Philly anywhere near as much as Jason Segel did, maybe he’ll decide to stick around. James can opt out of his current contract in 2021 …

V Street, sister restaurant to Vedge, is closing after workers tried to organize.

Labor unions protested as part of a nationwide Strike for Black Lives.