Here's why I'm troubled by the resurgence of ally culture: You don't get a badge of honor for helping to dismantle the racist system you're complicit in. 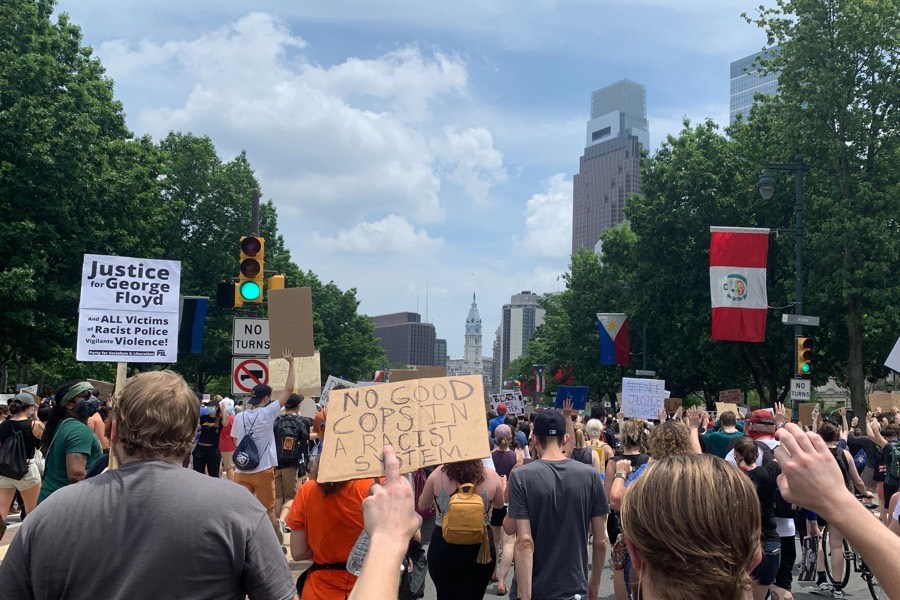 Protesters in Philadelphia on June 6, 2020. Photo by Claire Sasko

There is no other way to put this than bluntly: Racism is a white person’s problem to solve.

While racism harms Black and brown people directly, it is caused solely by white people’s actions and cultural influence. Racism manifests in various forms that include anti-Blackness, microaggressions, colorism, white privilege, white fragility, white supremacy, and implicit bias. These routine abuses, which have been instituted and normalized by white people over hundreds of years, have produced slavery, Jim Crow laws, mass incarceration, redlining, voter suppression, police brutality, gaps in education and wealth, and numerous other human rights violations. White people unconsciously and subconsciously perpetuate racism to the point that the simple act of declaring “Black Lives Matter” is seen as a political stance rather than the statement of an incontrovertible fact.

As we witness a new social justice uprising take off following the recent extrajudicial police killings of several Black people, the sudden resurgence of “white ally” culture needs to be examined. Countless advocacy organizations are trying to advise white people who have now become “woke” to racial injustice on how to be supportive of Black people and helpful to the cause overall. There’s an entire industry built on the concept of turning white people into advocates for change against racism.

But how can someone be a savior for fixing a problem he or she has perpetuated?

Why should there be a badge of honor or distinction of merit bestowed upon white people who are choosing to address a human error within themselves that’s been terrorizing others?

What does it say to the humanity of Black people that white people still get to play both the hero and the villain in their trauma?

By furthering this concept of allyship — the act of white people choosing to take action to support Black people in the fight against racism — we fraudulently provide a vapid solution to racism that lacks true accountability.

Even the term “accomplice,” chosen by the rare white people who go a step further — who do more than just support, who work to actively dismantle racist structures — perpetuates the culture of pointlessly glorifying white people who appear to give a damn.

If we are to seriously combat racism, we need to be brutally honest about how white people should conduct themselves in this fight. For starters, we need to do away with the expected pats on the back, fancy labels and symbolic gestures. Too many Black lives have been lost by the silence and complicity of “well-meaning white people” who may not have committed the criminal act, but who are guilty of looking the other way. You don’t get credit for showing up 400 years late and now suddenly giving a damn because you’re finally fed up. The option to care or not is the very definition of white privilege.

Racism isn’t something white people can cure themselves of just by wanting to. You can read a thousand books, go to hundreds of protests, and talk to dozens of Black people — but until the systems of oppression are permanently dismantled, white people are forever stained with the guilt and shame of racism. It’s a painful truth that may not be as motivational or uplifting as some would like — but this is what happens when a race of people actively or passively allows generations of white power to devastate others. White people need to sit with this discomforting knowledge as they become enlightened and address it within themselves.

As a man who is actively against sexism and endorses feminism, I understand this dichotomy. No matter how much I believe, defend and promote gender equality and equity for all, my male privilege will remain intact until the rest of society grants women their full rights and protections. I cannot deny the reality of a society that continues to treat others as lesser than cisgender men, nor can I deny that I still benefit from this injustice. All I can do is focus on all the ways I can dismantle these sexist paradigms within my own life without praise, visibility, or being asked to.

It’s time for white people to do the same when it comes to racism.

Just do the work because it’s the right thing to do — and understand that it will never be enough. This is selfless work that requires you to humble yourself and forever take responsibility for the role you’ve played (and may still unconsciously play) in allowing racism to persist. Allow that guilt to motivate you to never want to stay silent again, and accept that you’re not doing this just for your reputation, brand and/or public image — but because you owe it to humanity.

No, you don’t get to be the hero of the story, because there is no fairy-tale ending once society tramples racism. Instead, there will be bittersweet reflection that it took hundreds of years of lost lives and trauma before white people finally stepped up and did something. The only silver lining is that those white people who choose to act now can speed up this process, not just to absolve their own guilt, but to pay an inherited debt to humanity.