Fighting against racism is about more than performative empathy; it's about redistributing power. Until that happens, all of this presumed progress is a big white lie. 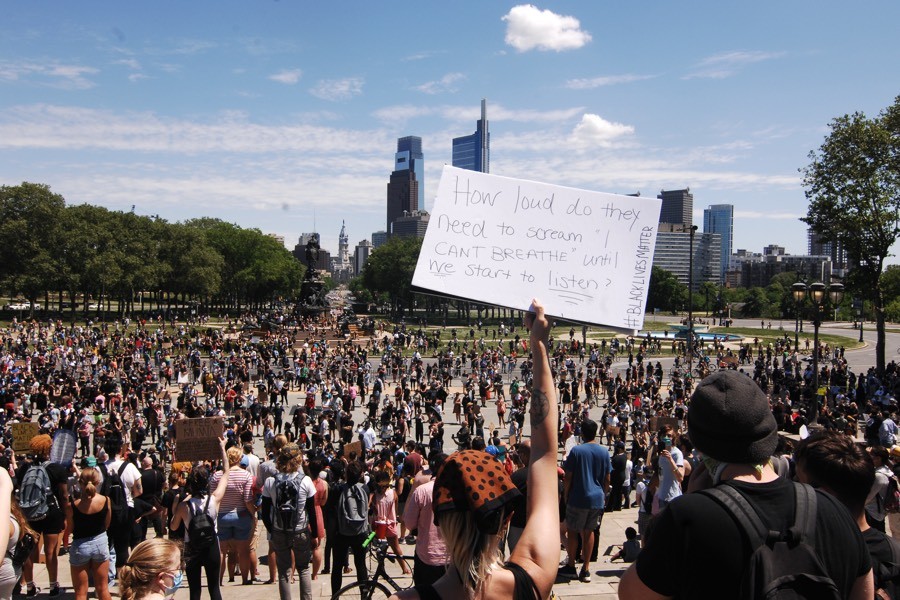 At this anti-racism protest, thousands of Philadelphians rallied on the steps of the Philadelphia Art Museum before descending on Center City to demand justice for George Floyd on May 30, 2020. (Photo by Cory Clark/NurPhoto via Getty Images)

“This shit reminds me of KONY 2012,” one of my friends told me over the phone when describing the latest rise in white people protesting against racial injustice, after the police killings of George Floyd, Breonna Taylor and Tony McDade.

“Kony?” I asked, confused. I literally had no clue who he was talking about.

“Exactly,” he said, wisely. “White people will go crazy about this for a hot second and return back to their bullshit.”

On March 5th, 2012, a YouTube video produced by a small nonprofit called Invisible Children told the horrible story of Ugandan warlord Joseph Kony. For more than two decades, Kony eluded capture while abducting children by the thousands and using them as soldiers and sex slaves. The 30-minute video became a viral sensation and helped raise $32 million for the white-led nonprofit seeking justice. Major influencers, such as Bill Gates, Rihanna and even Oprah, used their huge platforms to spread awareness. The U.S. government even boosted military operations on the ground.

And then things got bizarre: The buzz died down, and so did the momentum. By 2017, efforts to capture or kill Kony had ceased. Today, Kony is still on the loose as white people set their sights on a new global movement to partake in — namely, the growing fight against racism.

Over the past week, there have been countless attempts by white people (and the corporations they run) to show how much of a damn they give about Black people. Uber Eats is waiving delivery fees for the rest of the year for users ordering from Black-owned restaurants. Wendy’s is donating $500,000 to social justice causes. Warner Bros. is offering free rentals of the racial justice film Just Mercy. Elected officials and white protesters are oddly (and undesirably) taking a knee with police officers. NFL commissioner Roger Goodell has apologized and admitted the league was wrong all along in not supporting athletes protesting against police brutality.

In Philadelphia, the statue of racist Frank Rizzo finally came down, and his infamous South Philly mural has vanished with it. Local Black bookstores are getting a boost as books on anti-racism are flying off the shelves nationwide. At least one white restaurant owner is going so far as to refuse to serve police officers.

All of this change is happening so quickly. Can it be true? Is racism finally getting a kick in the ass?

Don’t be fooled. White people, I still don’t believe you.

I’ve been covering racism and social justice issues for nearly a decade, first in college and now professionally. I remember when the first cycle of Black Lives Matter activism caught the attention of white sympathizers. I will never forget when white people foolishly thought wearing safety pins to telegraph their allyship was a solution after Trump was elected. I’ve written about all of this over the years for this publication and several others. So understand that my pessimism isn’t without deep insight.

The reason all of those previous efforts failed — and that these current ones still feel vapid — is that they don’t address the roots of racism: power and privilege.

This week, I’ve received more glowing reviews and social media follows from white people than I’ve had in my entire career. I’ve gained more than 2,000 new followers (and counting) on Twitter and have hundreds of new ones on Instagram. Dozens of them, while well-intentioned, are bombarding me with questions on how they can combat racism, what books to read, and when the next protest will be. I’ve had to set my phone to do-not-disturb to offset the rapid-fire notifications from white people hitting me up at all hours of the night to emotionally dump their white guilt on me, virtue-signal, over-compliment my writing, or ask me for advice.

Here’s a brief overview of the kinds of messages I’m receiving:

“Did you see this [insert very racist thing]? I can’t believe people are so cruel.”

“Hey, I read your piece. Well done. I was wondering if you could [recommend an anti-racism book, suggest a legitimate protest to attend, and/or fact-check something for them that they can all Google themselves].”

“So, I hope I’m not bothering you [yes, you fucking are], but this racist thing just happened today and I want to know if I could pick your brain on what I should do.”

“Hey, how’s it going? I just wanted to check in on you and hope you’re doing okay” [says white person I haven’t spoken to in years].

Translation: White people, I have a life that cannot stop to cater to yours right now.

Use Google, read my extensive previous work on anti-racism, watch Netflix documentaries, take anti-oppression training, or pay for a Black consultant to guide you. But do the work on your own instead of asking Black people to do it for you for free.

Demanding anything more like this from Black people (for free) is called slavery. Eject those plantation politics from your skull immediately.

Dismantling racism is about more than just declaring how very much you are against it; it requires that you actively redistribute the power you have as white people in your daily lives. If you are not invested in decentralizing whiteness in positions of privilege and dominance, then you are not helping. Racism is white supremacy, and unless you’re working to eliminate the white power structures in your workplace, government, education, health care, entertainment, nonprofit, tech and corporate structures, you aren’t doing anything.

Kneeling in tone-deafness with cops damn sure isn’t enough, or even good.

But: Relinquishing power and reducing the space you take up in society as white people is good.

Restoring such power to the rightful and worthy hands of Black and brown people is even better. This will require white people to lean into discomfort and reflect on making personal sacrifices. This is what combating racism actually looks like.

There have only been two examples so far that I believe exemplify how society should move forward. Last Wednesday, Los Angeles Mayor Eric Garcetti announced that he is slashing up to $150 million from the city’s police department and putting it back into Black communities. Actively defunding the police — who have a long history of afflicting Black people — and investing those funds back into the marginalized spaces is what all mayors in America should be doing (especially you, Jim Kenney). On Friday, Reddit co-founder Alexis Ohanian resigned from the company’s board and requested that a Black candidate fill his now-vacant seat. He has also committed to donating to Black causes future monies that he earns from his stock in the company.

Now that’s the kind of energy needed to seriously address the level of systemic and racial inequality that’s plagued this country for centuries. Anything less is just white noise.