White Allies, the “We the People Rally” Is Your Time to Put Up or Shut Up

Calls for a “diverse” crowd to confront what’s shaping up to be a gathering of white nationalists put black and brown lives in danger. White folks need to deal with their people on their own. 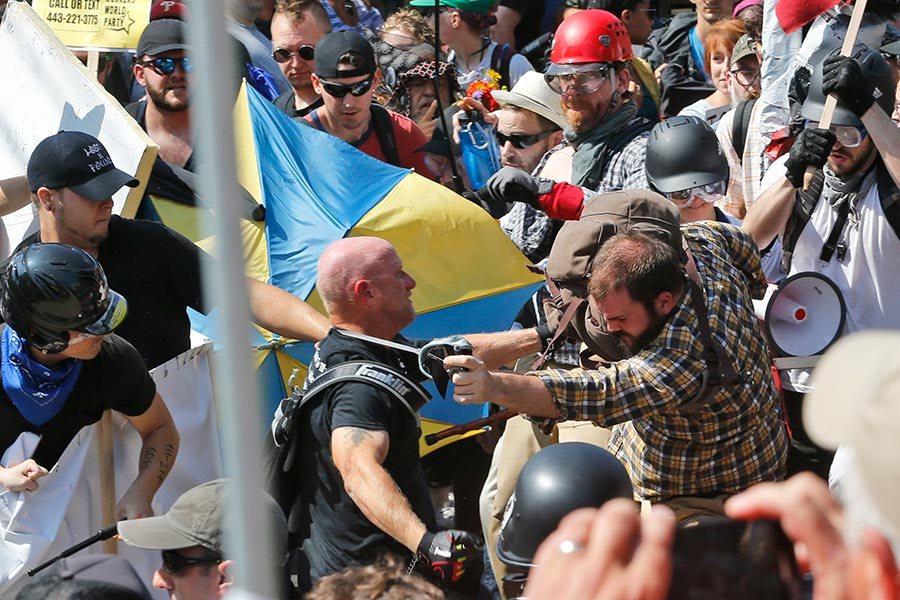 Political ideologies are expected to clash when the controversial “We The People Rally” hits Independence Mall on Saturday.

The organizers have asserted that “too many times our voices are drowned out by the voices on the left” and declared that the “Silent Majority must make a stand now.” If you consider to be one of the “Patriots, Militia, 3%, constitution loving Americans” or feel “pro good cop, pro ICE, pro law and order, pro life, pro American value, pro gun and anti illegal immigration,” you’re invited.

Despite how racially polarizing all of this sounds, the organizers want attendees to know that “any violence, racism, or display of hate by any group or individual is extremely prohibited” and that they will remove individuals displaying such behavior. However, organizers will also “not be held liable for bodily injury or personal damages.”

If you have to go out of your way to include a disclaimer that your event is not a hate rally, chances are that it is.

Case in point: On Wednesday, Comcast fired a 10-year employee who had been targeted in a viral petition for alleged ties to a Pennsylvania chapter of the Proud Boys — an all-male organization that the Southern Poverty Law Center has deemed a hate group — and a role working security at We the People.

At best, the organizers are being naive about the type of participants they’re attracting to the event, if not downright careless. All of this is triggering for a Black queer man like myself who knows too well the dangers of hate rallies going off the rails. I still haven’t fully processed the “Unite the Right” rally that took place last year in Charlottesville, which featured violent confrontations between participants and counter-protesters and ultimately led to the deaths of a local activist and two Virginia state troopers monitoring the event. It’s easy to imagine Philly, a city known for its large-scale demonstrations, becoming even more contentious than Charlottesville.

Which is why calling on people of color and other marginalized groups to counter-protest this rally is reckless. For the first time in a long time, I simply do not think diversity is the answer — an activism that so clearly risks violence requires white people only.

This week, organizers affiliated with the International Action Center, PushBack Campaign, and Workers World Party have been calling on “im/migrants, people of color, LGBTQ folks, women, Muslims, Jews and all workers who oppose racism and bigotry” to show up to oppose We the People. Organizers have put together a counter-rally of their own, which on the surface seems laudable — but it lacks a strategic consideration for the marginalized groups they are defending. Why should people of color yet again put themselves in harm’s way to confront hatred that they aren’t responsible for?

To put it bluntly, white supremacy is a white-people problem, and those who consider themselves allies and/or accomplices in the community should tackle it head on.

If people truly believe that Saturday’s We the People Rally is going to be filled with hate, bigotry, and racism, what good will it do to subject people of color to it? As one who has stood on the front lines of grotesque protests, I can tell you that the hate being spewed only further harms me physically, emotionally, and socially. It’s already enough that marginalized communities have to confront daily onslaughts of racism in their professional and personal lives. Black and brown people should not be expected to endure even more hate when there are others much more obligated to pick up this labor. And, as always, white people hold the privilege of being protected during such protests by police and others far better than people of color are.

Too often I am asked by white people what can they do to make things better. This is one of them — showing up to confront others in your group who are making matters worse for the rest of us. If you agree with the sentiment that all of us are created equal and deserve equity and access, then you have to put some real skin in the game. When potentially dangerous rallies come to our city, stop asking black and brown people to do the labor you collectively have yet to do. White people have to do more than just cheer on social media or cling to marginalized people for inspiration — they have to actually have to leverage their privilege to protect us as well.

In other words: White people, get your people.