Can Somebody Just Open a Frank Rizzo Museum Already and Stick the Statue There?

In light of yet another vandalization of the controversial statue, the owner of Pat's Steaks has upped his pledge toward the creation of a museum where it could be housed. 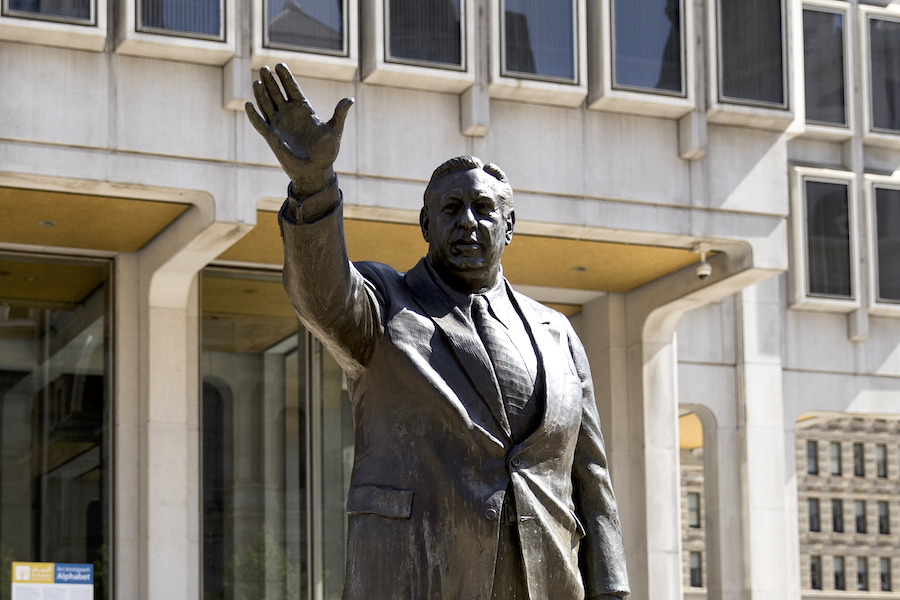 Over the weekend, the controversial Frank Rizzo statue in Center City was vandalized. Again. Yes, somebody wrote the word “fascist” on the bronze effigy, which still sits on the plaza in front of the Municipal Services Building — more than two years after Mayor Jim Kenney said that “now is the right time” to have a serious talk about moving it.

Well, there was lots of talk. That’s about it.

But make no mistake: The Frank Rizzo statue will not be there forever. I’d give it a few years. Max.

Listen, I know that there are a lot of you in the Philadelphia area (or retired to Florida) who still love Frank Rizzo. And, no, I don’t think that all of you are a bunch of far-right homophobic racists just because you’re fans of a guy who may have been all of those things. (Note: I said “may.” No hate mail, please!)

But the fact of the matter is that his — and your — time has come.

In case you haven’t been paying attention, Republicans just lost a forever-held seat on City Council to a bona fide socialist, Kendra Brooks. She managed to get the endorsement of Elizabeth Warren, who probably would have made Rizzo’s head explode as soon as she opened her mouth.

One of Brooks’s biggest supporters has been Councilmember-at-Large Helen Gym, who has been described by some as Philly’s own version of Alexandria Ocasio-Cortez, aka AOC. And Gym — the single largest vote-getter on City Council in both the May primary and last month’s election — is Philly’s most vocal opponent of the Rizzo statue.

And let’s not forget about the millennials. God love ’em. The millennials either don’t know who Frank Rizzo is, sorta like Billie Eillish being clueless about Van Halen, or they’ll cast get-woke shame on you for trying to defend the guy or the statue.

So you can kiss the Frank Rizzo statue goodbye — at least from Center City. Kenney’s office most recently indicated that the statue would probably be moved sometime in 2021 and perhaps to South Philly. But I’m not convinced that the more lefty end of the city isn’t going to come up with other ideas that could include, oh, say melting it down and turning it into hundreds of “Dump Trump” pins.

My advice? All you Rizzophiles need to band together and open a Frank Rizzo museum in South Philadelphia where the statue could be housed.

I’ve suggested this before, but Philly conservatives clearly have a pretty hard time organizing. Just look at the state of the city’s Republican Party, which hasn’t managed to produce a respectable candidate for mayor since Clay Aiken (remember him?) was charting.

It’s really not all that difficult. You raise money. (You all have a lot of money, what with the economy being so good under Donald Trump, right?) You buy a building. You get a bunch of donations from people who scored cool Frank Rizzo mementos and paraphernalia from the big estate sale earlier this year, and you put those donations — and the statue, of course — on display at the museum. People could have their photos taken with Rizzo’s nightstick. Sky’s the limit!

I even got you your first donation lined up for you.

When I raised this idea in 2017, Pat’s Steaks owner Frank Olivieri offered $5,000 toward a Frank Rizzo museum — not because he’s necessarily Frank Rizzo Fan #1, but because he, like me, saw this as a way to resolve a civic crisis. And to just be able to stop talking about it.

Well today, in light of this newest instance of vandalism and the fact that the city can’t manage to actually do anything about the statue controversy, Olivieri has doubled his prospective donation to $10,000.