Officials are touting a project to revamp safety infrastructure on two of Center City’s busiest roads for cyclists — but on the weekends it feels like it doesn’t even exist. Here’s why it’s critical that we clamp down on bad driver behavior now. 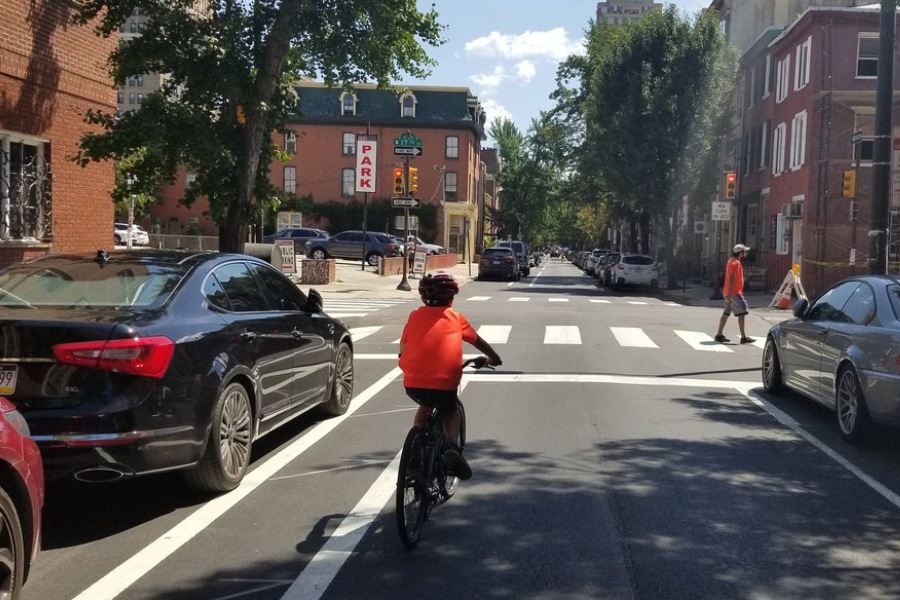 The first thing you’ll notice when cycling along the newly repaved Pine Street bike lane is that it is smooth — like unbelievably, am-I-really-biking-in-Philly, I-thought-Philly-was-covered-in-potholes smooth.

After gliding blissfully for a small stretch of the road, the second thing you’ll see is a parked car blocking the bike lane. You’ll have to dodge it, of course, so you’ll look over your shoulder for oncoming traffic and pedal into the car lane.

Problem is, you’ll soon notice a second parked car farther along the bike lane. And if you happen to be biking on a Saturday or a Sunday, you’ll see a third, and then you’ll notice that parked cars have taken over entire blocks of the Pine Street bike lane, so you’ll have to cycle in the car lane, and you’ll probably wonder if the new repaving project along Pine and Spruce streets actually included plans for any bike lanes at all, or if officials only intended to create space for parking on both sides of Pine and Spruce streets, while making them smoother, of course — which, by the way, you’re suddenly not quite as happy about.

Here’s the thing: The paving revamp along Spruce and Pine streets, which began last month, does include keeping the roads’ bike lanes. The project, which you can learn more about here, primarily entails switching those bike lanes from the right to the left sides of the roads. (Officials believe this move will decrease the risk of dangerous right-hook turns like the one that killed 24-year-old Emily Fredricks on Spruce Street in 2017.) But you wouldn’t know it on weekends, because you can’t see bike lanes when they’re beneath parked cars.

If you read about the 'makeover' of Spruce/Pine Sts in the news this morning and have concerns about driving/parking on the street once the unprotected bike lane is moved to the left side of the street, have a look at these artist's conceptions of the new design. #bikePHL pic.twitter.com/NgSjL2zSoz

Of course, it’s worth noting that the revamp is not yet finished. Maybe when it’s complete, it’ll make cycling conditions along both roads not just smoother, but safer. Right now, though, drivers seem to be using the project as a license to park wherever they want, especially on Saturday and Sundays (for reasons I’ll get to later).

Kelly Cofrancisco, a spokesperson for the city, said that while long-term parking isn’t permitted in the bike lanes on Spruce and Pine streets, the Philadelphia Parking Authority was not actively patrolling along the roads during construction, when the lanes were being swapped from the right to the left sides of the roads. Now that signs were recently reposted with new parking regulations, PPA “enforcement will begin” again, an organization spokesperson told the Bicycle Coalition on Wednesday afternoon.

So far, both Spruce and Pine street have been fully repaved (with the exception of certain stretches of Spruce Street, where milling has been delayed due to PECO utility work). As of Wednesday morning, both roads featured white paint marking the bike lanes (the 6-foot space on the far left side of the road) and a smaller 3-foot buffer zone providing distance between cyclists and cars.

Pine St is much improved. The pavement is smooth and well marked. #bikephl pic.twitter.com/EWhU8uw7uL

But in the meantime, let’s be clear, drivers: Spruce and Pine streets did not suddenly lose their bike lanes, nor did they gain parking on both sides of the road. While it’s legal to stop your car in the bike lane for up to 20 minutes — should you have to load or unload your vehicle, etc. — the left side of the road is not yours to claim for long-term parking.

Of course, the issue is worst on Saturdays and Sundays, when the city upholds a policy — dating back more than 20 years, per Cofrancisco — that allows people attending religious services to park as they wish in the bike lanes. The idea seems simple enough: Religious organizations apply for parking permits for parishioners who might have trouble walking longer distances, the Streets Department hands out those placards to religious houses, and worshippers take and display them on their dashboards so they don’t get a ticket.

The problem here, apparently, is that other drivers notice those parked cars and assume they, too, can get a free pass. While Cofrancisco said the PPA only enforces its no-parking policy during approved worship hours, which typically end in the early afternoon, I noticed cars lining both Spruce and Pine Street well into the evening on a recent weekend. And since the PPA wasn’t patrolling, why not?

And all the good Christians who go to church from 7 am to 7 pm on sundays from 2nd street to 22nd Street, it is amazing how many god fearing Philadelphians there are!

Thing is, the parking policy predates the roads’ bike lanes, which were installed in 2009. Since the rule went into place, the city has shifted its attitude toward our streetscape. Recent plans from the Office of Transportation, Infrastructure and Sustainability evince less of a car-centric attitude than has been historically adopted by the city; instead, officials seemed to be focused — as they should be, considering the state of traffic congestion in Philly — on finding ways to unclog our streets and move more bodies through the city efficiently, whether by bus, subway, trolley or bike.

Considering that reframing, now is a optimal time for officials to rethink the Spruce and Pine streets weekend parking policy, or, at the very least, how it’s enforced. One resident noted on Facebook this week that a parking lot at 17th and Pine streets — just one block from Tenth Presbyterian Church — remained “virtually empty” this past Sunday, while nearby drivers chose instead to flood the bike lane. As another commenter noted, the policy therefore not only clogged roads without need and endangered cyclists but “is hurting a business too.”

If officials want to get serious about bike lane infrastructure and set the tone with this project, they should draw the line with drivers now. The PPA should ticket parked cars without worship placards — during and after construction, and on weekends. Lax parking policies like this one, and the failure to enforce a project that’s supposedly setting the standard for street safety in Philly, only help to prolong a culture built around ignoring bike infrastructure on these two highly trafficked roads.

After all, the city is making progress: More than half of the vehicles cited for obstructing a bike lane in 2018 were parked on Spruce and Pine streets. Across Philly, violations for obstructing bike lanes rose 17 percent last year, reflecting a steady increase since 2013. There’s no reason to make sweeping exceptions on weekends, especially if OTIS is serious about ramping up bicyclist safety. Chipping away at bad behavior starts here.

This story has been updated to include new information from the PPA.