It’s starting — and you might be wondering how it will affect your commute (and more). 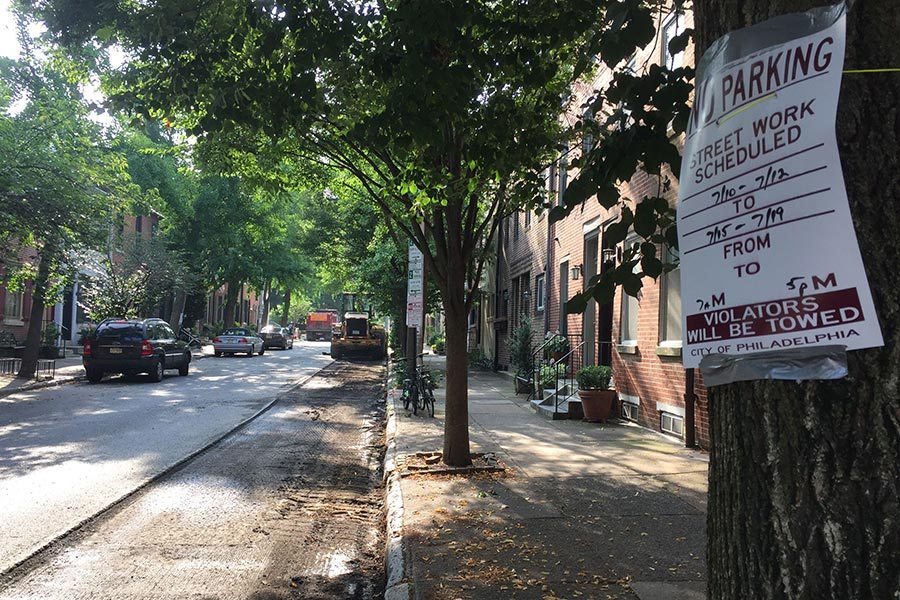 Construction for the bike lane revamp has begun at 25th and Pine. Photo by Claire Sasko

The city has begun its highly anticipated revamp of the Spruce and Pine street bike lanes.

The project will, among other things, switch the road’s two bike lanes from the right to the left sides of the streets. It’s welcomed by cyclists — and some neighbors — who have bemoaned safety and traffic conditions on Spruce and Pine street in recent years.

Here’s information on the project’s background, what the revamp will accomplish, and what to expect if you live or drive in the area.

A need for protection

Originally set to take place in fall 2018, the revamp was delayed until this spring … and then delayed again until this month. Christopher Puchalsky, policy director in the city’s Office of Transportation and Infrastructure Systems, explained the setbacks in October: The project is “really important,” he said, and “rather than doing it quick, rushing, we’d rather do it right.” Plus, he said, it didn’t make sense to repave the roads just before deteriorating winter weather conditions.

Some background: The Spruce and Pine street bike lanes, which are among the most traveled in the city, provide an east-west connection between Fitler Square and Society Hill. They’re not what cyclists call “protected” — meaning there’s no physical barrier separating the cyclists who pedal along them from cars on the road. (Protected bike lanes, like those on John F. Kennedy Boulevard and Market Street near City Hall, usually feature plastic delineator posts.)

These particular bike lanes became highly scrutinized after the December 2017 death of Emily Fredricks, a 24-year-old cyclist who was struck and killed by a trash truck that turned right into her path at the intersection of 11th and Spruce streets. Since then, cyclists have advocated for the city to add protection to the Spruce and Pine street bike lanes. (The roads are also frequented by delivery trucks that pull in and out of the bike lanes to drop off packages to residents, prompting additional complaints from cyclists who find it dangerous to weave around them.) But the city is moving forward with what officials see as an alternative fix.

How the revamp will change Spruce and Pine streets

That fix includes switching the bike lanes from the right to the left side of the street. Doing so, officials stress, will reduce the risk of right-hook crashes — like the one that resulted in Fredricks’s death. Right-hook crashes are four times more common than left-hook crashes, according to the Bicycle Coalition of Greater Philadelphia. (Drivers turning left typically have more visibility than those turning right.) Plus, left-hand bike lanes can help reduce conflict with buses, which use the right side of the road.

Image via the Office of Transportation, Infrastructure and Sustainability

The city will switch the placement of the Spruce and Pine street bike lanes when it resurfaces the roads between Front and 25th streets (on Spruce) and Front and Taney streets (on Pine). It will also partially protect areas of both bike lanes: new intersection treatments, which are meant to designate bicycle and vehicle spaces at “key” locations, will include flexible delineator posts to keep drivers out of the bike lanes at intersections and green paint to highlight potential areas of conflict, per the city. 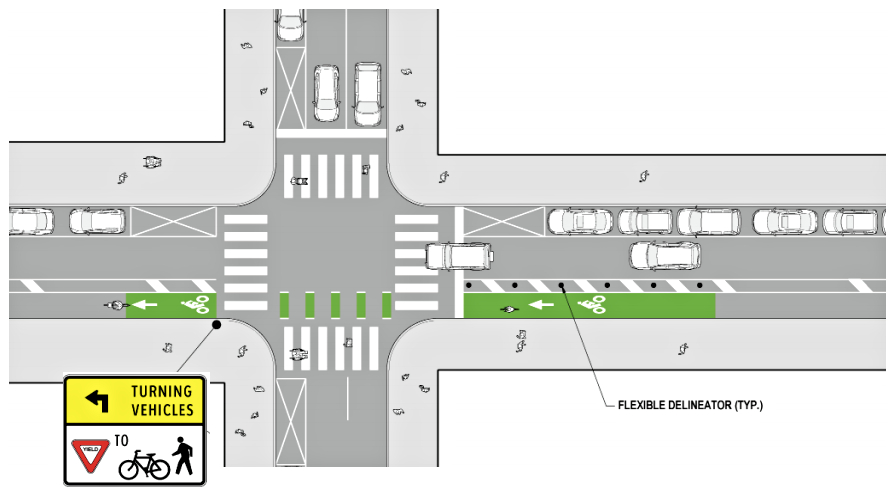 Image via the Office of Transportation, Infrastructure and Sustainability

What to Expect During Construction

Construction will occur in phases, several blocks at a time, with each section taking approximately five work days.

Here’s what to expect: Workers will mill the streets to remove existing asphalt; then they’ll adjust manholes and grates and other utility features; after that, they’ll repave the streets; finally, they’ll install new line striping, including the bike lane location switch and other signage.

Construction will begin along Pine Street, from Taney through 17th streets, and move eastward from there to 17th through 9th streets, followed by 9th through Front streets. After work on Pine Street is completed, crews will repeat the same approach on Spruce.

As construction occurs along certain stretches of both roads, the city expects at least one travel lane to remain open for people biking and driving. Exceptions will be made for periodic closures, though. (At least one block of Pine Street was closed on Wednesday morning.)

The city is reminding drivers that Pennsylvania Motor Vehicle Code defines bicycles as vehicles — meaning cyclists are permitted to take up the entire lane in the event of a temporary bike lane closure.

Also, residents should expect street closures and parking restrictions during the construction phase. Temporary “no parking” signs will be posted in advance of scheduled activities.

OTIS, which oversees bike lane implementation, will offer a pop-up meeting about the project from 5 p.m. to 7 p.m. on Thursday, July 11th, at the intersection of Broad and Spruce streets. You can learn more about that event — and the bike lane revamp — right here.