The number of vehicles cited for obstructing a bike lane rose 17 percent in 2018. But bike advocates warn that the deterrent effect might be weakening. 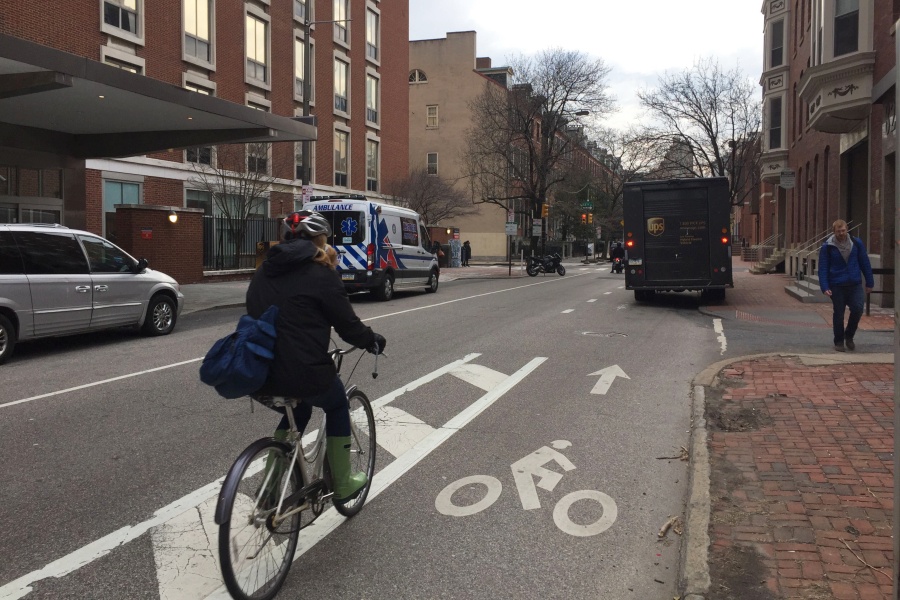 More than half of the tickets issued for blocking bike lanes in 2018 occurred on Spruce (pictured) and Pine streets, according to the Bicycle Coalition. Photo by Claire Sasko

Good news for cyclists (and bad news for drivers who block their paths): Tickets for vehicles obstructing bike lanes are continuing to rise.

The organization (which has long advocated for cyclists the Philly area) has sounded the alarm on bike-lane infractions with the PPA since 2013. Related tickets have risen steadily since then, with the largest jump occurring between 2014 (when 1,991 tickets were issued) and 2015 (when 4,302 tickets were issued), according to the organization. The increase between 2017 and 2018 was the second-highest.

Members are quick point out particularly problematic roads, like Spruce and Pine streets, two major bike thoroughfares in Center City where the PPA and PPD handed out more than half of the total related tickets in 2018. Of the 5,438 tickets issued for blocking bike lanes that year, 1,901 occurred on Spruce Street, while 1,370 occurred on Pine Street.

The bike lanes on these two roads are perhaps the most contentious in the city. Bicyclists have long pushed officials to change the east-west routes to protected bike lanes by adding some sort of physical barrier that would separate the paths from cars (such as plastic delineator posts). In the past, some residents have opposed adding protected bike lanes on these roads, citing what one Washington Square West Civic Association board member in 2017 called a “gentlemen’s agreement that cars would be permitted to pull over [into the bike lanes] for deliveries,” according to the Inquirer.

The city’s Office of Transportation, Infrastructure, and Sustainability, which is responsible for overseeing bike lanes, has said that the widths of Spruce and Pine streets would make it difficult to implement parking-protected bike lanes, the type of protected bike lane that the organization favors. But there are plans to swap the Spruce and Pine street bike lanes from the right to the left side of the road and add protection at various intersections, in a reconfiguration that officials hope would increase cyclist safety and decrease the chances of “right hook” accidents like the one that killed 24-year-old cyclist Emily Fredricks in 2017. The revamp has been delayed until sometime this spring.

The Bicycle Coalition calls the Spruce and Pine street bike lanes “the most abused by motorists.” The organization welcomed the increase in tickets, though in a blog post published this week, it claimed that some delivery businesses “have built the ticketing into their business model, making the tickets their drivers receive, essentially, meaningless.”

“The increase in ticketing, to be clear, is welcome,” the organization wrote in the post. “The fear of a $40 ticket is likely keeping some motorists from pulling over in the bike lane and putting a cyclist’s life at risk. But it’s not enough of a deterrent.

“Ticketing does not stop all motorists from breaking the law, and it only takes one illegally parked vehicle, stopped in someone else’s right of way, to injure someone,” the post continued.