After an uptick in direct attacks on people holding food this year, the Shore town wants vendors to consider closed takeout containers and other deterrents. But it’s people who cause the mess in the first place. 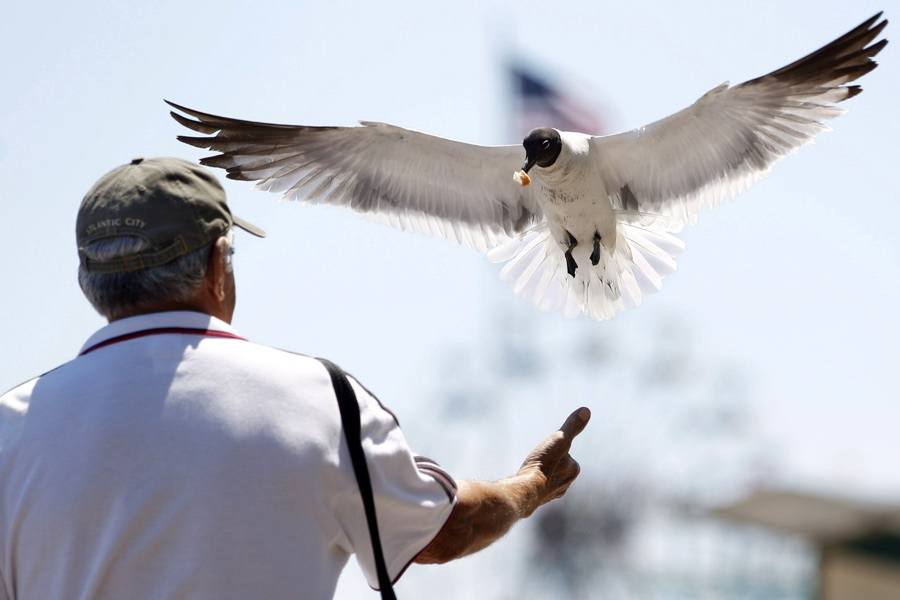 This seagull is not your friend. Photo by Mel Evans/AP.

When you go to the Shore, you’re bound to encounter some annoyances. There are your fellow humans (we ranked the worst of them here). Then there are those pesky gigantic biting flies. But even within the narrow category of airborne nuisances, the flies aren’t the worst of the bunch. No, that distinction would have to go to Shore seagulls, which have absolutely no manners or shame when it comes to torpedoing from the sky to snatch food from an unwitting person’s hand.

It’s gotten so bad in Ocean City that mayor Jay Gillian issued a public statement last week calling the gulls a “public safety hazard” and begging beachgoers to be more vigilant in protecting their food from the birds.

But then, it’s not really the fault of the birds, is it? The only reason they’re so addicted to human food in the first place, after all, is because humans have feeding them — wittingly or unwittingly — for years. “When somebody feeds them it’s like giving a little kid chocolate,” says Daniel Hernandez, a biology professor at Stockton University. “They develop a taste preference, and it’s not likely they’d want to eat anything else.”

Part of the issue here is that gulls, by their very nature, are aggressive. They scavenge for food — “They steal from each other all the time,” Hernandez says — be it a dead animal carcass on a beach, or clams or mollusks. So when they get a taste for French fries and funnel cakes, well, they’ll employ the same scavenging strategy then, too.

That explains this sort of behavior:

“One took my pizza and the other one pooped on me” how Ocean City NJ is dealing with aggressive seagulls. Tonight at 10pm @FOX29philly pic.twitter.com/C9m5ypir3h

Once the birds reach this point, there isn’t a whole lot you can do to reverse course. No longer feeding the things would be a start, but it’s hardly the only place a seagull can seek out human food. It makes no difference to them if they get their food from an outstretched hand or an abandoned pizza box. Even if — and it’s a big if — people along the beach managed to erase all trace of processed food, it still might not be enough.

“Birds are pretty smart animals,” Hernandez notes.  It’s not uncommon to see them tailgating in a McDonald’s parking lot looking for scraps, or anything else they can toss down their sea-gulllet. And there just so happens to be a McDonald’s in Ocean City a few blocks from the water.

But Ocean City isn’t giving up that easy. The township passed a law back in 2016 making it illegal to feed the gulls, threatening offenders with a $500 fine. (Although in the law’s first year, the city reportedly didn’t issue a single ticket.)

In any case, there is one small morsel of good news. According to Hernandez, one particular species of gull is more aggressive than all the others: the so-called “laughing gull.” That bird happens to be migratory and will be leaving Jersey once the weather gets cold. Then, Hernandez says, “they’ll be going down to Florida for the winter.”

We look forward to that, but we can’t help but feel a bit bad for Florida, too. After all that flying, you can bet the gulls will be hungry.