And it turns out that their appearance on the sprawling sands of the Garden State might be due to that blasted global warming. 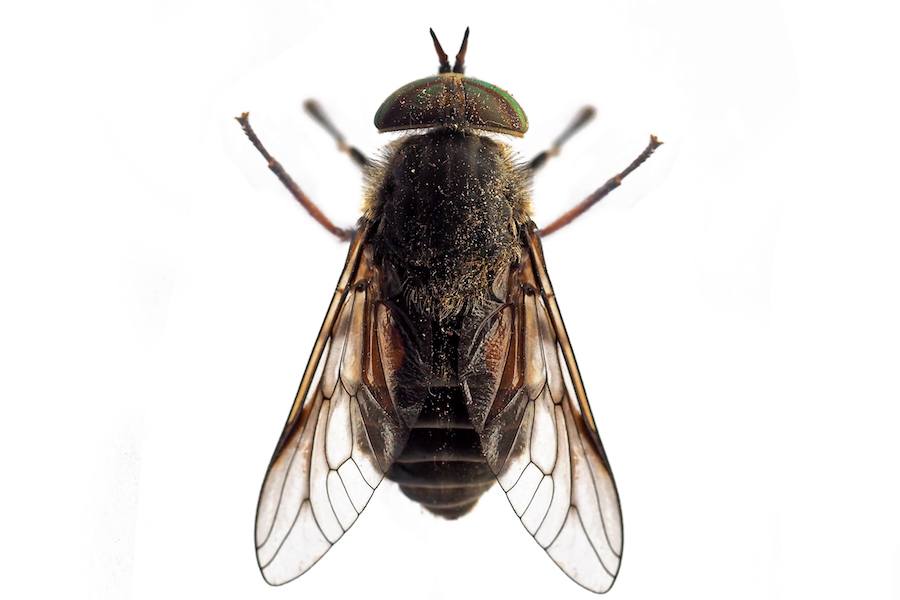 The bullish horsefly, a prime suspect for what’s been biting me at the Jersey Shore these last few seasons. (Getty Images)

For the better part of my adult life, I’ve been spending many summer days at the Jersey Shore — from Long Beach Island all the way down to Cape May, but usually smack dab in the middle in Atlantic City. Tabanus nigrovittatus, known to non-entomologists as the greenhead fly, has long been a part of this experience. I’ve come to accept the fact that my desire to sit in the sun and listen to the waves is inevitably tied to the need of this green-hued scourge to bite me.

But in the last few years — I can’t pinpoint exactly when — a new biting fly has entered the arena. It’s blackish. It’s larger than the greenhead fly or the common housefly. It produces a bite that starts off as a sharp blip of pain followed by an itch. And it has sent my family packing on more than one occasion.

“It’s certainly some type of horsefly,” says George Hamilton, the chair of entomology at Rutgers University. “Their whole tactic is to use parts of their mouth to scrape your skin, and then their behavior is they realize they’re going to get swatted, so they fly away and then they return to lap up the blood.”

“They stab you, the blood wells out, and then they sponge it up with their mouth,” is how Rutgers entomologist Randy Gaugler terrifyingly puts it.

Because I haven’t managed to capture a live specimen or a photo of one of these newcomers on my skin — I’ve been too busy trying to kill them or at least flee — Hamilton, Gaugler, and other insect experts I spoke to weren’t able to positively identify what’s been causing my turmoil. None of them have seen any scientific data to suggest that there’s an increase in some new biting fly species at the Jersey Shore. Of course, neither have they been looking for it.

I sent Hamilton the above photo of Tabanus bovinus, aka the bullish horsefly, a cousin of the greenhead fly. After scouring through images of horseflies online, I’m almost positive that it is the bullish horsefly that is my new foe at the Jersey Shore. And a colleague, who has also taken note of these pests using language I won’t repeat here, agrees that this is the probable culprit.

“It’s possible,” Hamilton says. “It does appear to be present in the U.S.”

I explained to Hamilton that I never noticed these flies until the last few years and asked him why that might be.

He pointed to the amount of rain we had last summer and that we’ve been having this summer, which may have allowed the flies to expand their native habitat, because there are more wet areas and this is where horseflies like to lay their eggs.

Then there are the mild winters we’ve experienced. “That can impact survivorship during the winters,” notes Hamilton.

“Or it could be as simple as climate change,” he adds. “We’re getting warmer farther north, and things are expanding. The southern pine beetle wasn’t in South Jersey ten years ago. It’s there now. Lone star ticks are expanding their range up the state. We think this is primarily because things are warming up due to climate change.”

I tried to find somebody in Atlantic County, home to beaches from Brigantine down to Somers Point and, seemingly, trillions of biting flies, whose job it is to deal with these vacation-ruining pests. The closest I got was Mike Gustray, a mosquito inspector with the Atlantic County Office of Mosquito Control.

Gustray says that officials don’t care much about greenhead flies or other nasty horseflies, simply because they don’t carry disease.

“It’s the mosquitoes that we’re concerned about,” says Gustray. “Because mosquitoes do carry disease.”

Gaugler used to focus his research at Rutgers on greenhead flies, but switched it up to mosquitoes exclusively.

“These flies don’t transmit disease and they don’t cause economic damage,” he says. “So it’s very difficult to get funding.”

Hamilton points out that New Jersey law requires counties to have some type of organized mosquito control but doesn’t have any such requirements for the flies.

“It’s possible that the adulticides that the counties are using to control the mosquitoes could have some effect on flies,” he adds. “But when they’re adulticiding, they may not be putting the adulticide where the flies are, because they’re not looking for flies. They’re looking for mosquitoes.”

In other words, like in most situations, we can’t wait for the government to solve our problems. We need to take action ourselves, which raises the question: Can we do anything to avoid being bitten by flies at the Jersey Shore?

To an extent, yes.

If you want to find these flies where they like to hang out in between feasting on your body, go to the tidal marshes inland. That’s where they live. And what that means is that when the wind is coming out of the west, the flies are traveling right along with it and onto your skin. If the wind is coming off of the ocean, you should see many fewer flies, agree the Rutgers entomologists. So check the weather report.

Also, flies of this kind are attracted to dark colors. In fact, when researchers and officials do want to catch these flies, the traps they use are always dark, says Gaugler. I can’t imagine why anybody would wear dark clothing to the Jersey Shore on a sunny day, but if that’s you, then don’t.

Which brings us to repellants.

“I know a guy who has been fishing at the Jersey Shore for decades, and he swears by a 50/50 mixture of Skin So Soft and old-fashioned lemonade,” Gustray tells me. “But I haven’t tried it.”

Gaugler laughs at that notion.

“Now that’s one I haven’t heard before,” he says. “Things that contain DEET, like Off, may have some impact, but Off is much, much more effective against a mosquito, because they are so small. Think of it as a person. If I weigh 300 pounds and touch a contact poison, the effect is going to be much different on me than it would be on an 80-pound young girl.”

As for Hamilton, he thinks you should save your money if it’s biting flies that you are concerned about.

“The straight version of Skin So Soft can work against no-see-ums, the little teeny-tiny biting flies, because it creates a film on your skin that makes it hard for them to bite through,” says Hamilton. “But I know of literally nothing that’s effective against greenheads and other types of horseflies.”

If you happen to be headed to the Jersey Shore this weekend, be ready. According to Gaugler, the beginning of July just happens to be prime season for all of these ghastly biting things. Good luck.