But some dockless operators have already moved on. The future, they say, is with electric scooters — which remain illegal across Pennsylvania. 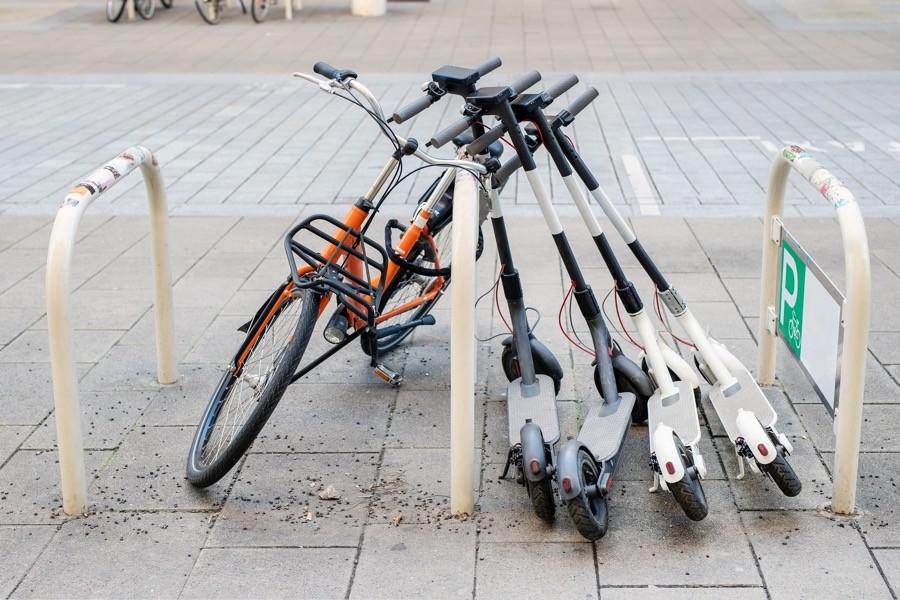 If you’ve been following the inexorable rise of dockless transportation, you surely already have a decided opinion on the matter. The battles are old news by now, as ingrained as two eternally opposed philosophies. There are the optimists, those believers in the freedom of parking their vehicle anywhere they feel like it. And then the countervailing pessimists — those who distrust their fellow humans precisely because of that freedom to park anywhere.

But what if there could be some middle ground?  The city of Philadelphia is planning a new pilot for dockless bicycles, which is slated to begin this fall, and after months of internal discussions, it released the contours of its proposed program on Tuesday. The city’s solution: Riders will have to lock up the dockless bikes at the end of a trip, instead of simply leaving them strewn about anywhere.

It’s a clever idea. Most places where someone can lock up a bike are inherently removed from the pedestrian right-of-way. The city’s topography acts as its own sort of barrier to obnoxious behavior. (Although one could also imagine a world where someone parks a locked bike poorly, and it becomes all but impossible to move.)

Philadelphia isn’t the first city to implement the dockless-with-a-catch protocol. Austin, Chicago, and Washington, D.C., all  introduced similar regulations last year. Predictably, some operators weren’t happy, including the Chinese start-up Ofo, which made a big show of withdrawing its entire fleet from all three cities as a result of the new rules. “The city’s restrictive regulations have made it impossible,” a company spokesperson said of Chicago in 2018.

But not all dockless operators share Ofo’s angst. One company, Zagster, has praised the so-called “lock to” regulations and has fashioned itself as the moral dockless operator — even refusing to enter certain markets that haven’t yet mandated dockless bikes be locked up after use. (But keep in mind, before you heap too much praise on Zagster: It’s also got a business incentive to self-present like this. It’s one of the few companies with a special locking dockless model.)

Most other dockless companies appear closer to Ofo on the spectrum. Lime Bike, one of the companies that has advocated strongly here in Philadelphia for dockless transit, found itself disappointed by the city’s lock-to regulations. “It might be fine in Center City, where there are lots of bike racks,” says spokesperson Shari Shapiro, “but there’s a lot less bike infrastructure when you go outside Center City.”

Chris Puchalsky, director of policy at the city’s Office of Transportation, Infrastructure & Sustainability, the office that devised the dockless regulations, isn’t especially sympathetic to Shapiro’s plight.  “We already have litter problem,” he says. “We don’t want to make it worse.”

The city can’t spurn dockless operators entirely. Part of the game here is to convince them that Philly’s regulations aren’t too onerous, and that they’ll still be able to make money. The cost of participation in the year-long pilot program here is $76,000 — money that Puchalsky says will go toward city oversight, including hiring an employee whose job it will be to make sure the bikes are being parked and distributed properly. That’s in line with the annual market rate in other cities. The cost of a operating 1,200 vehicles in both Washington, D.C., and Austin would be north of $70,000 as well.

The city will eventually select two dockless operators, each of whom will have the right to put 1,200 bikes on the street, albeit only in a specific part of the city that has yet to be determined by OTIS. (The city’s own Indego fleet has fewer than 2,000 bikes, by comparison.) City officials at OTIS previously indicated that the pilot would be comprised entirely of electric pedal-assist bikes, but on Wednesday, Puchalsky said it will be up to the operators whether the bicycles are conventional or electric.

There are more rules. According to the regulations — still preliminary for now — OTIS will retain the right to impound improperly parked vehicles (and charge a $65 recovery fee) if they’re not moved by the operator within two hours of receiving notification from the city. The dockless companies must also set up a physical office in Philly. “What we’re worried about is having a company that’s entirely in the cloud, Silicon Valley mindset,” says Puchalsky. “We need someone that we can come see, face to face.”

Some Dockless Companies Have Moved On to Scooters

Lime says the future of transportation isn’t with bicycles, but electric scooters. So, too, does Bird, another company that has invested in Philly as a prospective market. But electric scooters remain illegal in Pennsylvania, and a proposed bill that would have changed things recently stalled in the state legislature.

Bird and Lime seem to think that Philly’s current pilot is regulating an outmoded mode of transportation — one that, according to some reports, is increasingly being replaced by scooters. “Hopefully the pilot will go well and the city will get comfortable with the dockless model and give the customers what they want — which actually is scooters,” says Shapiro.

It’s not that simple, though. Riders appear to prefer scooters to standard bicycles, but electric bikes may be a different story. The National Association of City Transportation Officials found in a 2018 report that pedal-assist electric bikes were in fact the most popular mode of “micromobility” — in some cases receiving as many as 15 rides per day — especially when brought to a big city in large numbers. Scooters, meanwhile, seem to be most popular when the fleet size is smaller, suggesting they may work best when deployed to limited areas of a city.

That argument is far from settled. What’s incontestable is the fact that dockless transportation is here to stay. Philly has bet on bicycles for the time being. Whether or not that particular mode ascends to the top of the dockless fray remains very much an open question.