We Survived a Demo of the New Lime Dockless Scooters

But they’re still illegal in Pennsylvania. And the jury’s still out on how safe they really are for riders. 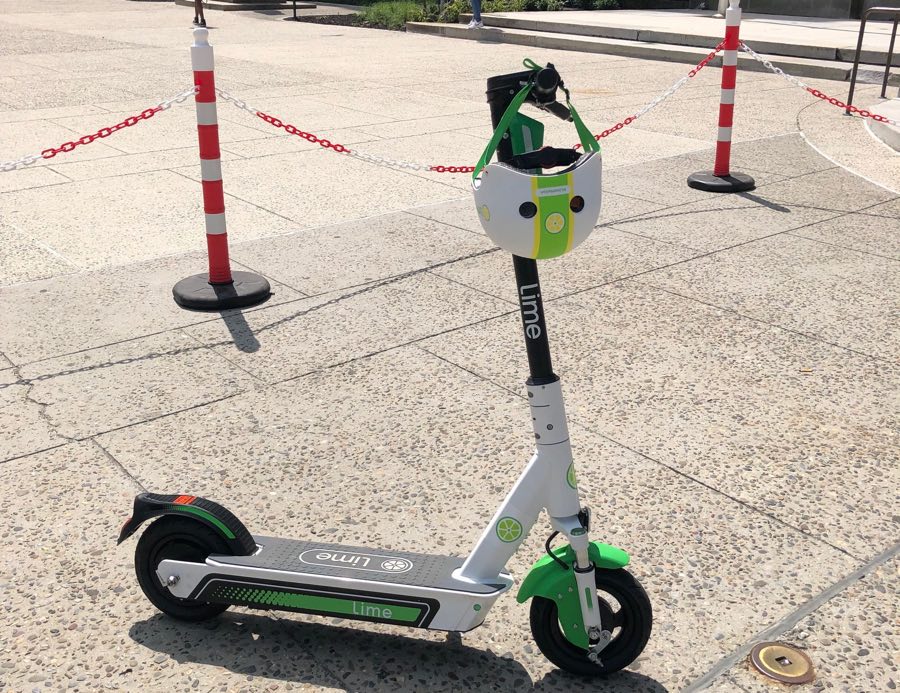 I broke the law on Thursday and it felt … wobbly.

Okay — it wasn’t really breaking the law. Lime Bike brought two of its electric dockless scooters for the public to demo along stretch of sidewalk outside City Hall. Electric scooters are illegal to ride on any street in the commonwealth, but this was a closed-course, sanctioned event. (The strategic choice of locale was not lost on city officials.)

Having never ridden an electric scooter before, I was unsure how I’d make out. The scoots are intuitive enough: You kick off the ground to get them moving, then use a little throttle around the right handlebar. There’s both a hand brake and a foot brake. Still, they aren’t super easy to ride at first — especially when riding one-handed and trying to shoot video:

Here’s what a much more stable, two-handed rider looks like:

The impetus for the Lime event on Thursday was the unveiling of the dockless vehicle operator’s newest invention: a bigger, beefier, scooter that the company says is designed for rough terrain. Philly potholes may have met their match!

With its green paint accents, this next-gen scooter does actually have a certain Hulkish quality compared to the other dockless scoots out there. It’s got 10-inch wheels and a shock suspension system. The Hulk scooters are also heavier, at 60 pounds — which could make them just a tad more difficult to, say, toss into a river, or a toilet, as many folks have done with previous iterations of dockless vehicles. (Don’t hold your breath on that last point, though.)

Philadelphia, along with New York City, is one of the few holdouts when it comes to embracing dockless scooters, which are proliferating worldwide and have attracted investment from the likes of Lyft and Uber. There’s currently a bill in the Pennsylvania legislature that would legalize the vehicles — like New Jersey recently did — but it hasn’t yet seen a vote. Shari Shapiro, a Lime Bike spokesperson, said she was “cautiously optimistic” it would pass by the summer.

But even if the scooters become legal, getting the city to sign on could be a different story. Some councilmembers, including Mark Squilla and Derek Green, appear bullish on the idea of a dockless future in Philly. But the Office of Transportation, Infrastructure & Sustainability (OTIS), which would ultimately be responsible for regulating any sort of pilot program, has focused more on dockless bikes. It’s primarily a safety concern. “It appears that scooters are somewhat to substantially more dangerous than other modes of transportation,” says OTIS staffer Aaron Ritz, who manages the city’s Indego bike program. (Shapiro disputed that safety conclusion, saying, “The statistics seem to show that scooters and bicycles have about the same rate of injury.”)

Ritz concedes that dockless scooters appear to have higher ridership than other types of vehicle sharing. According to Lime, its scooters receive about 10 rides per day. Philly’s Indego bikes get just under two per day.

Scooter mania has led to many studies trying to understand how dangerous these things really are. The most comprehensive of the bunch, overseen by the Centers for Disease Control and released in April, took a look at the dockless landscape in Austin, Texas. Over a three-month span during which nearly 1 million electric scooter trips were taken, the study found that only 190 riders ended up in the emergency room.

That may sound like a coup for the scooter companies, but there’s a catch: Of those 190 riders, only one wore a helmet, half experienced head injuries, one was only nine years old, and the majority had taken fewer than 10 total scooter riders, suggesting inexperience could have factored into the injury equation.

The CDC calculated that in Austin, 20 riders per 100,000 got injured on dockless scooters. That’s a significantly higher figure than bikeshare users: A large study from 2016 looking at Washington, D.C., among other locales, found a hospital injury rate of just 4.2 riders per 100,000 trips.

But forget the back-and-forth arguments about safety for a minute. The real burning question about dockless scooter share is this: Do you trust your fellow Philadelphians, once they’re done joyriding around, to leave their vehicles in a sane, safe place?

In Washington, D.C., an early adopter of all things dockless, it’s been an issue.

This @lyft scooter has been in swamp under the Roosevelt Bridge for at least a month pic.twitter.com/omrtAHFvNr

On that point, Shapiro cites a different study, from San Jose, which found that only 10 percent of the dockless scooters there were parked blocking the pedestrian right-of-way. In any case, Lime tries to combat this by making riders photograph their scooter park jobs once they’ve finished done riding, and the company reserves the right to ban anyone from its platform. But it doesn’t seem like the company’s exercising the full capacity of its built-in oversight power just yet.

Where you come down on dockless transportation may ultimately have more to do with whether or not you have an optimistic or pessimistic view of human nature. Ritz’s position is pretty clear: “It’s hard to prevent the miscreant nature of humans.”

The upcoming dockless bike pilot should provide a nice glimpse into how Philly will act when granted total parking freedom. (If South Broad Street is any indication, it could provide for some amusing photos, if nothing else.)

If you missed out on the Lime demo and are just dying to take an electric-powered ride, I have good news: You can still get your fix from one of those fancy pedal-assist Indego bikes. Just be sure to return it to the dock when you’re done.