Brace Yourself: The Dockless Bike and Scooter Scourge Is Coming

The city and state are clearing the way for new forms of rentable transport, but the experience of other cities shows that dockless could be more dystopia than utopia. 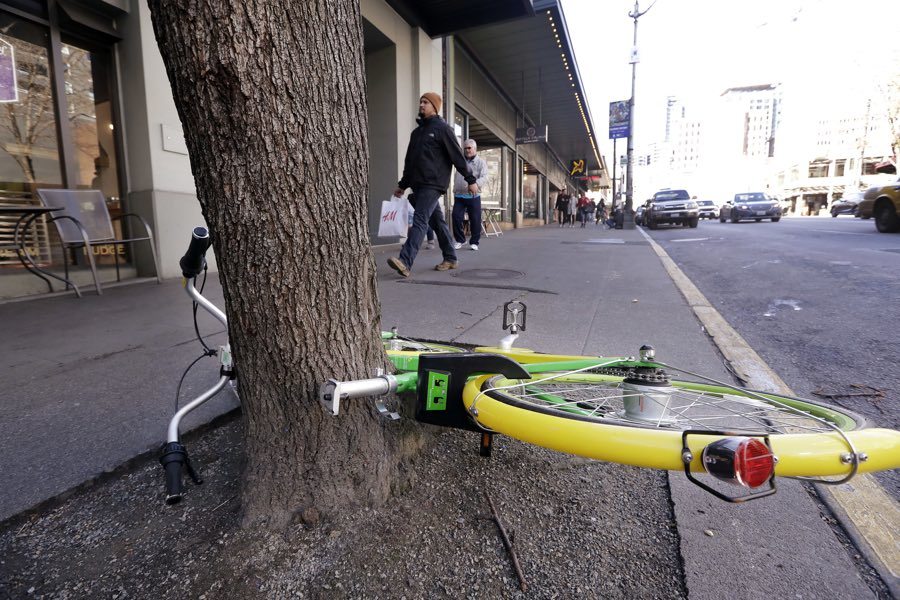 A dockless bicycle lies discarded on the street. Dockless vehicles have sprouted in cities around the world in recent months. (Photo by Elaine Thompson/AP)

Silicon Valley types have long viewed transportation as a ecosystem ripe for disruption. There’s Uber and Lyft, Elon Musk and his proposed hyperloop, Richard Branson and his tourist trips to outer space — the list goes on. But the disruptor du jour is something almost laughably ordinary: dockless electric scooters and bicycles, which in recent months have been infiltrating cities around the world — and infuriating people along the way.

Philly has so far been left untouched by dockless transportation, which is similar to Indego bike share, except that instead of ending your trip at a predetermined Indego “dock,” you can hop off anywhere you like — which also means you can park anywhere you like. That last detail is what’s had residents of cities across the country up in arms over the dockless trend, arguing that scooters and bikes end up cluttering downtown areas and enabling bad behavior. Scooters — the hottest new mode of dockless transport — have been especially reviled.

In Los Angeles, people turned to a sort of vigilante scooter justice, burning them on sight. Other enterprising folks have figured out ways to hack into the scooters and disable their anti-theft mechanisms, riding away with a new toy. Even progressive Seattle, the first adopter of dockless bike share in the U.S., has banned its scooter counterpart.

Low-speed electric scooters currently aren’t legal in Pennsylvania, although that could be changing soon: In January, two state reps, including Northwest Philly’s Stephen Kinsey, announced their intent to modify the law. Meanwhile, last June, City Council laid the groundwork for dockless transportation by passing legislation that would allow companies to operate bikes here. The Office of Transportation, Infrastructure, and Sustainability (OTIS) has been devising regulations ever since — a process which OTIS director Chris Puchalsky says could be finally completed in a month’s time.

At a City Council hearing last week, Puchalsky tried to pump the brakes on scooter mania, saying that if they become legal, he’d prefer to introduce dockless bikes to the city and “get experience with that animal first before we move to scooters.”

What’s clear though, regardless of the fate of scooters, is that between the proposed bill in Harrisburg and the one Council passed in June, Philly is well on its way to becoming the next frontier of dockless transportation. The startup companies realize it, too: Bird, one of the main dockless scooter operators, has already spent more than $30,000 in lobbying expenses here over the past year. And Lime Bikes, Bird’s main competitor, has enlisted a lobbying firm to work on its behalf at the state level.

On its face, Philly and dockless transport seem like a logical match. We’ve got the largest number of bicycle commuters of any United States city with more than 1 million inhabitants. Our traffic is terrible. And our urban center is way more compact and navigable than places like New York and Chicago.

So what could possibly go wrong?

Many things, actually. Let me present a few examples, in visual form.

This misbehaving scooter is just asking to be placed in a dumpster. And the person who left here should be ticketed!#dontparklikeanasshole #scooterrules #bird #downtownindy #lime #badparking #limecrime #indy

A post shared by Scooters Behaving Badly (@scootersbehavingbadly) on Dec 5, 2018 at 11:29am PST

It’s no wonder that according to one analysis from Louisville, dockless scooters there had a median lifespan of only 23 days. There are entire Instagram accounts dedicated to documenting the misuse and destruction of these things.

See, here’s the problem with the whole dockless model: The second you give people complete freedom, they apparently succumb to their worst Hobbesian impulses and go apeshit. Society only works because we operate according to an implicit social contract — and dockless transportation is like one huge paper shredder.

There are statistics about how often people actually park their dockless vehicles in places like a pedestrian walkway or a urinal. Washington, D.C., ran a dockless pilot program last year and determined that vehicles — bikes and scooters alike — were improperly parked 8 percent of the time.

Sounds like a pretty small figure. But if dockless transport ever becomes widespread, that 8 percent begins to look a little bit different. Consider: Riders used Philly’s Indego docked bike program more than 670,000 times last year. Let’s pretend those were all dockless trips, and 8 percent ended with a bad park job — now we’re looking at some 54,000 poorly placed scooters and bikes across the city.

“If people can leave things where they want to, they will,” says Aaron Ritz, manager of the Indego program at OTIS. The city fears that any benefits from dockless vehicles could be outweighed by having the pedestrian right of way blocked or handicap access impeded. And before you try to make the argument that docked bikes are just as likely to be left in the middle of the sidewalk — well, according to Ritz, Philly’s Indego users fail to return their bikes to the dock only 0.016 percent of the time.

Of course the dockless companies have a different take on the issue. “There will always be people that behave badly. Just think about the number of improperly parked cars in Philadelphia on any given day,” says Shari Shapiro, a spokesperson for Lime Bike. “Because of the fear that some people will use a system badly, you’re limiting the promise of micro-mobility, which is so important for access and for climate change.”

That point of transportation access is another tenet of the dockless utopian vision. It’s true that public transportation often fails to serve lower-income neighborhoods outside of the city center. A dockless program theoretically provides the same amount of access for everyone.

And yet, the data shows something else in practice. After its pilot concluded, D.C. found that dockless users traveled in almost the exact same areas as the preexisting docked bike share program. “This seems to indicate that dockless operators have not significantly increased ridership among areas and residents that are underserved,” the report concluded.

Portland also ran a pilot program with an emphasis on transportation equity. In that trial period, city officials asked three dockless providers — which included both Lime and Bird — to make 100 vehicles available in a lower-income neighborhood and also provide a cheaper fare. Bird was the only company to actually do so.

Look, it’s not all bad. Bicycle Coalition executive director Sarah Stuart notes that dockless technology gets people using emissions-free transportation, which obviously has positive implications for the climate. The Portland study determined that one-third of scooter riders would have otherwise gotten where they were going by car. “This technology crosses over to a whole new population,” Stuart says.

It’s still too early to tell if the city will fully endorse a dockless future. The electric scooters, in particular, have observers here and elsewhere worried about safety. It’s worth noting, however, that in Portland, the vast majority of scooter accidents weren’t due to collisions with cars or pedestrians, but rather due to people simply falling off their ride. And despite all the scary reports about scooter safety, well, they’re still way less likely to get you killed than driving a car.

Ritz remains hesitant. “We want to make sure we’re not just chasing the new thing,” he says. “Newness for newness’ sake versus real positive developments — those have to be separate.”

At the very least, dockless bikes should be showing up in Philly soon. And when they do, we’d be wise to keep one thing in mind: Just because they’re here today, doesn’t mean they will be tomorrow. (Just ask Camden.) They’re dockless, remember?