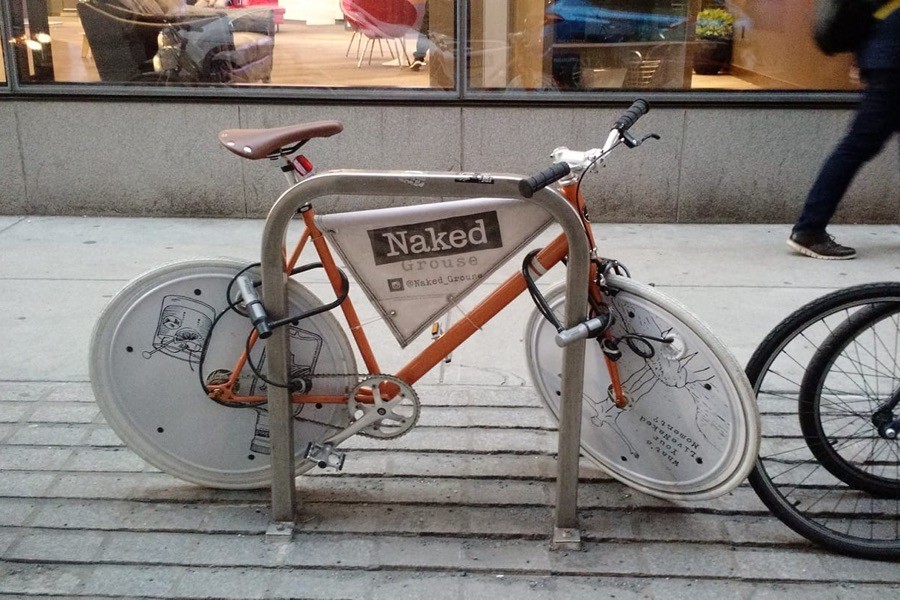 A Naked Grouse bike at 15th and Walnut streets. Photo by Randy LoBasso.

It’s a cutthroat world out there for brands. Pick a product — there’s almost certainly a good-enough substitution available for you, the all-powerful consumer. People are tuning out traditional advertising avenues like TV commercials. What’s a brand to do? Maybe it gets a fun voice-y Twitter account full of clapbacks. Or maybe it turns to a more insidious targeted digital ad campaign — but all of its competitors probably doing that, too. It can be tough to stand out amid the fray.

So you can almost understand the marketing technique that Naked Grouse, a Scottish whiskey brand, deployed here (until it was cut short this week) in Philadelphia: locking up 10 bicycles — emblazoned with the company logo — across the city. The logic is simple, really: Why pay for a billboard when you can use a bike rack for free? 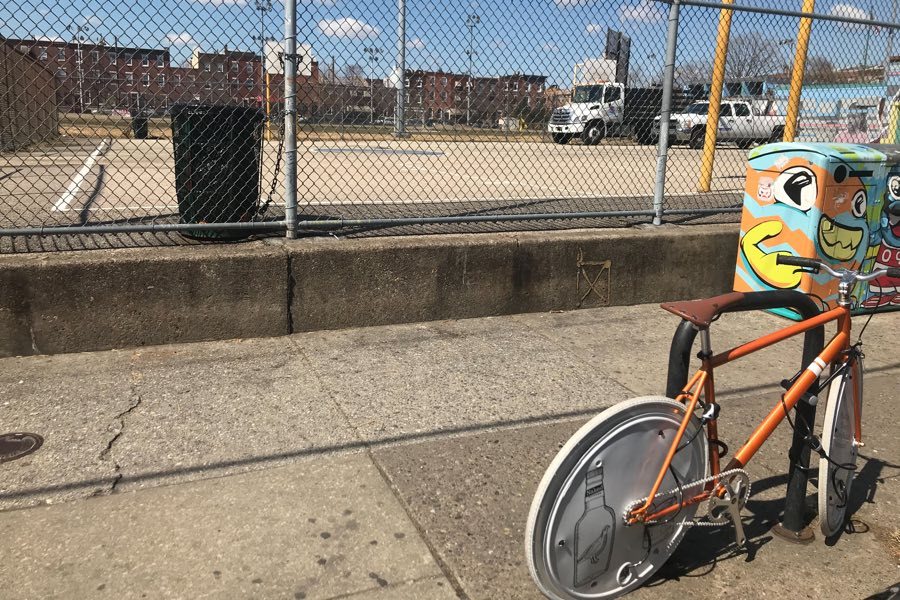 A couple of reasons, actually: First of all, you can’t just lock up a bike and leave it chained indefinitely. Someone can report it as abandoned, and the city will eventually cut the lock and donate the bike to a local charity. Also, strictly from a logical standpoint, this campaign is ill-advised. People who are most likely to encounter the ads — bike riders — are also the ones most likely to be pissed off by a repurposed branded-bike taking up the entire parking space. And Philly has the highest proportion of bike commuters of any big city in the country — adding up to a lot of pissed-off people.

Randy LoBasso, a policy manager at the Bicycle Coalition of Greater Philadelphia, says he’d noticed the bikes parked around town for months, but never paid enough attention to realize he was an advertising target. (Some successful campaign, right?) “I didn’t realize it was a permanent fixture and marketing campaign until I started talking about it with other bicyclists,” LoBasso wrote in an email.

It turns out the bikes have actually been around for the better part of a year. Naked Grouse sponsored last September’s iteration of the Naked Bike Ride — see, now that’s actually a clever marketing ploy — and people rode them along the route. Ever since, Naked Grouse brand manager Chris Vogt says, the 10 bicycles have been parked and rotating among different bike racks throughout Philly.

According to a City Hall spokesperson, the first officially filed complaint about the bicycles came in February. But there hadn’t really been much public grousing until LoBasso fired off a tweet on Monday calling for their removal.

.@NakedGrouse, it's time to remove your guerrilla marketing campaign from Philadelphia's streets. Your bikes are inappropriately locked to bike racks all over the city, giving *actual cyclists* no room to park. The city is already lacking in parking & you have made it worse. pic.twitter.com/6b7mK3xpbL

The so-called “guerrilla marketing” that LoBasso references in his tweet is an apt phrase for what’s going on here. Typically, the term is used to denote nontraditional marketing campaigns that are inexpensive. But the phrase has a deeper meaning: The original Spanish word guerrilla literally means “little war.” And in advertising, as in war, the ends always justify the means — at least when the ends are to survive and make more money.

Nothing is really off-limits in advertising, explains Wharton marketing professor Leonard Lodish, so long as your campaign resonates with its targeted demographic. “Being a little bit edgy, a little bit illegal,” Lodish says, could be a winning play for Naked Grouse. “It really depends on who they’re appealing to.”

But you’ve got to pick the right kind of rule-breaking. Naked Grouse’s sponsorship of a nude bike outing was a great idea in that it combined bicycling with some naughtiness. But those people are still bikers first, nudists second. That’s why the current campaign is so perplexing: It’s marketing to the very people it’s disrupting. When informed that cyclists had begun reporting the bikes to the city, Vogt, the Naked Grouse ad-man, sought to correct course, writing in a statement: “We apologize to the Philly bicycle community, as it was not our intention to take up multiple bicycle parking spots and inconvenience Philadelphia cyclists.”

Naked Grouse is hardly the first company to try and fail using guerrilla marketing. In 2007, Cartoon Network placed mini electric billboards across the country to promote one of its TV shows. People in Boston mistook the ads for explosives and the city called in the bomb squad — costing taxpayers nearly $1 million.

But not all guerrilla marketing ploys are birthed in bad faith. Lodish, the Wharton professor, points to Philly venture capitalist Josh Kopelman — one of the pioneers of this sort of marketing. Kopelman’s most famous PR stunt in the guerrilla vein came in 1999 when he convinced — okay, paid — the town of Halfway, Oregon, to change its name to that of his e-commerce company, Half.com. Kopelman ended up on the Today Show, and soon sold his company to eBay for almost $400 million. (Lodish’s other favorite Half.com stunt was when the company placed its logo in public bathroom urinals with the message, “Don’t piss away half your money, go to Half.com.).

Unfortunately for Naked Grouse, going guerrilla hasn’t proven nearly as successful. See, the company failed to consider one critical variable in its calculation: Unlike with, say, a billboard, bike racks parked at ground level can be tampered with. And earlier this week, some good Samaritans had the removed the flags bearing the company name — previously affixed with plastic zip-ties — from multiple bikes, leaving them, well, naked. 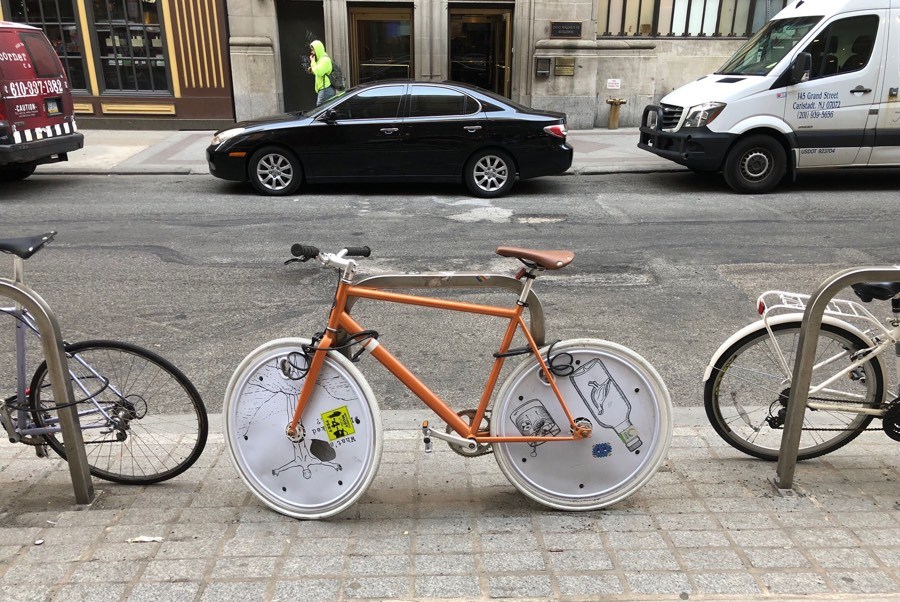 The same 15th and Walnut Naked Grouse bike. Doesn’t really look like much of an advertisement anymore, does it? Photo by David Murrell.

Then on Thursday, the bike advocates awoke to find that all 10 of the Naked Grouse ads were gone. LoBasso celebrated his triumph, thanking the city.

Thank you @philly311 @PhilaStreets for clearing this bike rack of an abandoned advertisement! https://t.co/keC2rFy5uV

But in reality, the removal had nothing to do with City Hall. Instead, it was Naked Grouse, in an effort to fix this self-inflicted flat tire, that unchained the bikes. Let this be a lesson: City bureaucracy is never as efficient as an embarrassed company dealing with a PR gaffe.