Sure, we’re a “model city, with a Super Bowl-winning (and Trump-defying) NFL team and a new radical political class” — but it didn’t hurt having a homegrown writer on the inside. 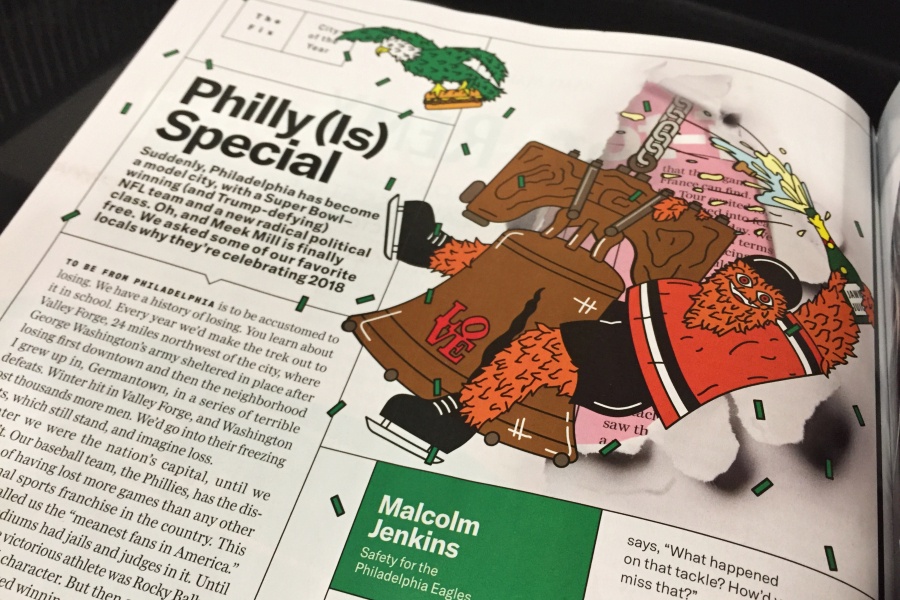 GQ magazine named Philadelphia the “City of the Year” in its December issue.

GQ magazine has affirmed what every Philadelphian has known deep down in their hearts since February: Philly is the City of the Year.

The only men’s monthly still worth reading has devoted two pages of its December issue (the content of which you can find online here) specifically to praising our city. In the spread, titled “Philly (Is) Special,” writer Zach Baron labels Philly “a model city, with a Super Bowl-winning (and Trump-defying) NFL team and a new radical political class.”

Baron, who’s from Germantown, writes that in 2018,

“Eagles players became activists, speaking out about the flawed criminal-justice system. Donald Trump disinvited the team from visited the White House out of spite; our mayor, Jim Kenney, then called our president “a fragile egomaniac obsessed with crowd size.” Our recently elected District Attorney, Larry Krasner, is the most progressive D.A. in the entire country. Our restaurants now regularly grace Bon Appétit’s Best New Restaurants list. Will Smith joined Instagram and immediately became incredible at it. You don’t have to sell your plasma or your soul to afford an apartment in the city. It just feels … different in Philadelphia these days. Downright victorious, even.

Unsurprisingly, each of them has a whole lot of love for our city. Jenkins said he thinks Eagles fans are no worse than his own father, who isn’t scared to criticize him after he misses tackles. Krasner said Philly “is fertile ground right now for criminal-justice reform for a lot of reasons — and one reason is, frankly, the past, of going the wrong direction for so long.”

Meek Mill talked about the support he felt while watching the Eagles walk onto the field to his song “Dreams and Nightmares” during the Super Bowl. (At the time, he was in jail). Finally, Martínez said one of her favorite things about Philadelphia is how “attentive” people are — and that her restaurant has had an impact on not only the Latino community but all the restaurants in the city.

And you know what? All of them are right, of course. Because Philly is amazing, and now everyone knows it.

If Gritty doesn’t win TIME’s Person of the Year, at least we have this.