This Woman Claims She Was Drugged at the Dolphin in August

Police continue to investigate allegations that have emerged from the popular South Philly bar. 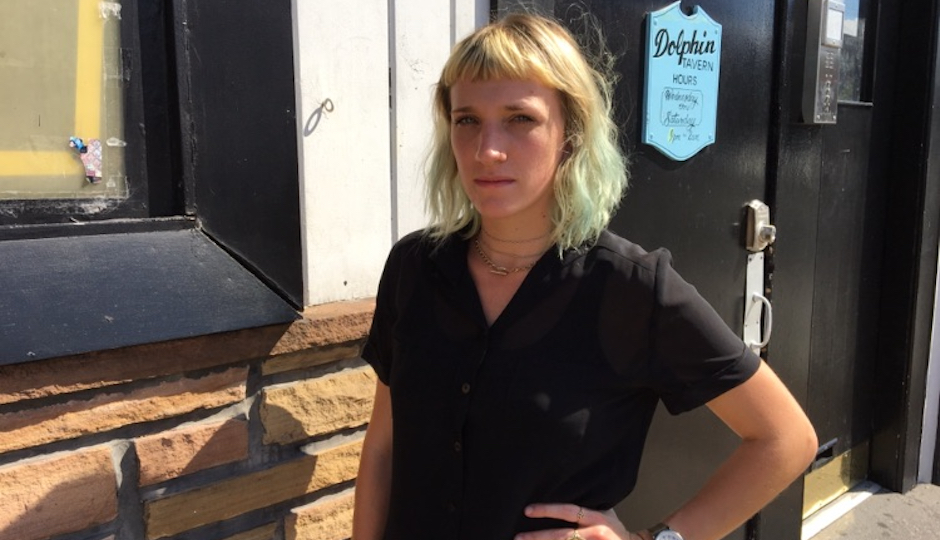 Hannah Smiley-Jones at the Dolphin. (Photo by Jennifer McDonell)

It has been six months since we first told you about allegations of drugging at The Dolphin and about the resulting police investigation. All told, more than 20 people have said that they believe they were drugged at the popular South Philly bar.

Most of these patrons have not gone to the police, and most do not want to speak publicly about their allegations. But Hannah Smiley-Jones is ready to tell her story.

It was Wednesday, August 16th.

The nation was still reeling from the car attack and white supremacist demonstrations in Charlottesville, Virginia, over the previous weekend, and Smiley-Jones and a friend, Sarina Carr, decided to attend the “Philly Is Charlottesville” rally that night in Center City.

After the rally, the two women went back to Smiley-Jones’s apartment in Rittenhouse Square (she has since moved) to wash up and get ready to go out. They heard about a DJ at the Dolphin that they wanted to see, so they Ubered to the Broad Street bar around 10 p.m. Both women say they had nothing to drink before arriving at the Dolphin and didn’t use any drugs of any kind.

Carr says that over the course of their time at the Dolphin, they ordered three rounds of whiskey-and-ginger ales. As Smiley-Jones remembers it, when they went to the dance floor, they brought their drinks with them, but she can’t say for sure that she never left her drink unattended.

Around 1 a.m., Carr left the Dolphin. Smiley-Jones says that according to her phone records, she ordered an Uber around the same time that Carr departed but never got in it. The ride was cancelled.

Shortly after 5 a.m., Smiley-Jones was pounding on the front door of a home on the 1300 block of South 18th Street in South Philadelphia.

“The first thing I remember is this woman opening the door and asking if I was OK,” Smiley-Jones recalls. “I told her I thought I was. She asked me where I needed to go and whether I could get there OK. And then I Ubered back to my house. Everything in between the Dolphin and her stoop is just completely blank.” 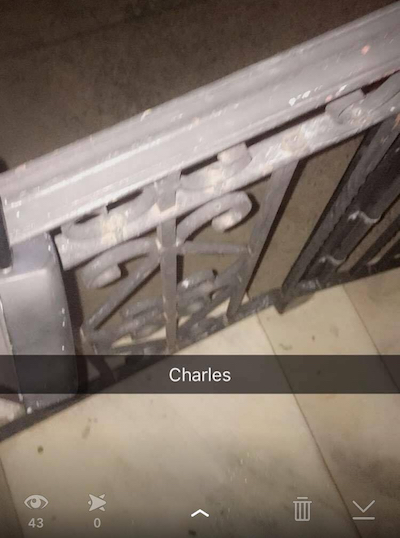 After she got home, she showered and took the train to work in Ardmore. As the day wore on, she became more and more confused — and concerned — about what had happened to her. She looked through her phone for any indication of what had transpired during those hours of blankness, but all she found was a SnapChat image she had taken overnight with the caption “Charles,” as seen here. She doesn’t know what it means.

While at work, Smiley-Jones texted Carr, who insisted that she go to the hospital to get checked out.

“None of this made any sense to me,” Carr tells Philly Mag. “She was on pace with me drinking the whole night, and I was totally fine. We had three small drinks in, what, three hours? This was not the kind of night where we were pounding drinks and doing shots.”

Smiley-Jones went to Hahnemann Hospital, where a rape kit was performed, and then to Special Victims Unit, where she gave a statement to police. The results of the rape kit are not in yet.

“What I went through was disturbing, scary and a direct product of rape culture,” she observes. “While I don’t know for sure if I was sexually assaulted, I do know that I lost control of my body against my will. I may never know what happened during those hours where my life went dark. But I want to send a loud and clear message that I will not be silent, and I will fight back. I can only hope that reclaiming my power out loud will help others do the same.”

After our initial stories on the drugging allegations, Dolphin owner Avram Hornik made some changes to the bar that included the addition of surveillance cameras; there were previously none. But police have yet to request any recordings from the night that Smiley-Jones was at the Dolphin, and it’s unclear if any such recordings still exist.

“We have completely cooperated with police,” Hornik said last week when we reached out to him for comment. “The safety of our patrons is our 100 percent biggest concern. But the police have not presented any issues or explained in any way what could be happening.”

Hornik insists that there is no proof that a crime of any kind occurred in the first place and that a cop told him last week that the investigation is “inactive.”

A detective we spoke with said that the investigation is ongoing. The detective wouldn’t tell us exactly how many people other than Smiley-Jones have made allegations to police of drugging incidents at the Dolphin, but placed the number at “more than five.” The detective said that police interviewed employees of the Dolphin months ago.

“Victims tend not to remember anything,” says the cop. “And unless they get to the hospital right away, they can’t even be tested for GHB. Maybe testing in the future will be better.”

As for Smiley-Jones, her social life has changed a lot since that night at the Dolphin. She says she’s going out a lot less.

“This has definitely changed the way that I navigate the bar scene,” she observes. “I just don’t feel safe anymore.”