Expect hundreds of protesters to march on Broad Street on Wednesday evening. 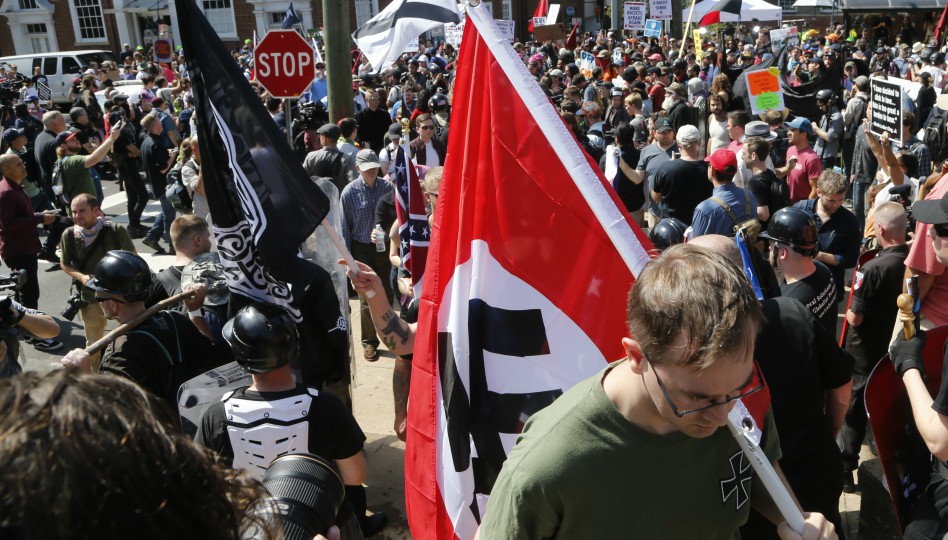 A white supremacist carries a Nazi flag into the entrance to Emancipation Park in Charlottesville, Va. on Saturday, August 12th. (AP Photo/Steve Helber)

Activists plan to gather on Wednesday night in Center City as part of the “Philly is Charlottesville” march and rally.

Interfaith organization POWER (Philadelphians Organized to Witness, Empower and Rebuild) will host the event, which kicks off at 7 p.m. outside the Congregation Rodeph Shalom Synagogue, located at 615 N. Broad Street.

The march is held in support of those who pushed back against the white supremacists and neo-Nazis who stoked violence this past weekend when they gathered  in Charlottesville, Va., heavily armed and clad in Confederate flags, KKK hoods and swastikas, to protest the removal of a Confederate statue. Philly organizers will pay tribute to 32-year-old Heather Heyer, who was killed on Saturday when a car driven by a man from Ohio plowed into a crowd of organizers. Officials have since deemed the incident an act of domestic terrorism.

According to a Facebook page for the Philly event, demonstrators will begin to march south on Broad Street toward the Arch Street United Methodist Church, where they plan to rally around 8 p.m. More than 1,500 people have said they’re “going,” while more than 5,000 said they’re “interested.”

Philly Democratic District Attorney nominee Larry Krasner will attend. At a festival in Point Breeze this past Saturday, Krasner condemned white supremacists and President Donald Trump for his initial response to the rally and Heyer’s death. Trump drew widespread criticism on Saturday for saying that the mayhem was the fault of “many sides,” not just that of neo-Nazis and white supremacists.

“When Donald Trump was asked what he thought about this [Saturday], he said he was worried about the hatred on all sides,” Krasner said at the festival. “Well I don’t know what other sides he’s talking about. You got one side that runs people over in cars, that carries torches, that advocates the death of people that look different than them, and then you’ve got some people who are opposed to that.”

Join Larry and hundreds of others tomorrow night to march and unmask white supremacy on behalf of love: https://t.co/oo5NSNHvYH

The backlash prompted Trump to condemn the Ku Klux Klan and neo-Nazis on Monday, but on Tuesday evening, Trump again blamed “both sides” for the deadly violence, including what he called the “very, very violent” “alt-left.” The president also asked rhetorically whether citizens would next seek to remove statues of George Washington.

Organizers of tonight’s event claim that “the worship of Confederate idols and race superiority is a threat to the progress that we as a country have made to move beyond our dark history,” according to the Facebook page.

“We must boldly rebuke all forms of bigotry on behalf of love, and on behalf of humanity, we must continue to resist all tactics to create fear and terror in the hearts, souls, and minds of marginalized communities,” the page reads.