Khan, who gave a memorable anti-Donald Trump speech at the DNC, has weighed in on the city's crowded D.A. race. 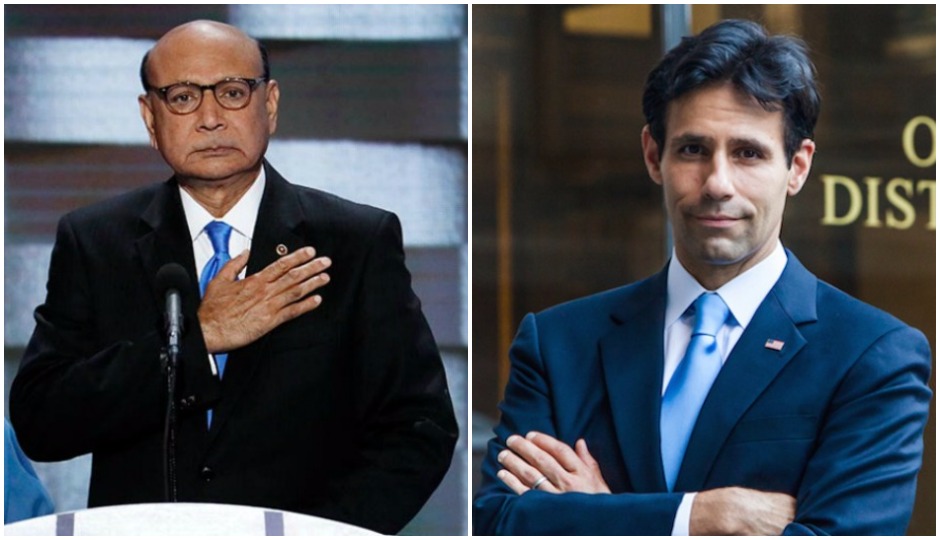 You remember Khizr Khan – the Muslim American Gold Star father who was thrown into the national spotlight after his passionate anti-Donald Trump speech during the Democratic National Convention? The man who U.S. Army Vietnam veteran Tom Keefe nominated to run for the Virginia General Assembly?

Well, Khizr Khan just weighed in on the crowded race for Philly district attorney, and he’s throwing his support behind candidate Joe Khan (who happens to have the same last name as him).

Joe Khan is one of many self-declared progressive candidates vying to replace Philly District Attorney Seth Williams, who was recently indicted on 23 corruption charges. Joe Khan is a University of Pennsylvania law professor who has prosecuted sexual assault, political corruption and hate crimes in both the District Attorney’s and U.S. Attorney’s offices. His platform, as detailed in our Q&A series with the D.A. candidates, includes plans to defend the city’s so-called sanctuary city status, eliminate cash bail, stop prosecuting most simple drug possession cases, overhaul the civil asset forfeiture program and limit the death penalty to “extreme cases.” If elected, Joe Khan would be the state’s first ever Pakistani-American District Attorney.

In a statement, Khizr Khan called Joe Khan “a leader I am proud to support” and “a lifelong public servant and progressive who has prosecuted hate crimes and stood up for some of the most vulnerable people in our society, including survivors of domestic abuse and sexual assault.”

If you need some refreshing on Khizr Khan, check out his DNC speech, which was arguably the most notable address of the whole convention. The speech prompted backlash from Trump, which led Khizr and his wife, Ghazala, to continue to publicly speak out against him.

Below is Khizr Khan’s full statement on Joe Khan, who’s up against seven other Democrats and one Republican in the Philly D.A. race:

“When I spoke out against Donald Trump at the Democratic National Convention in Philadelphia, it wasn’t as a Democrat or a Republican, it was as an American deeply concerned about Trump’s lack of respect for our democracy, our values, and our Constitution.

And now that Trump is President, it is more important than ever that we support local leaders who will stand up for our most cherished ideals. That’s why I’m proud to support Joe Khan, a Democrat running for District Attorney in Philadelphia – the same city where I made my plea to Donald Trump to honor our Constitution.

Joe Khan is the son of a Muslim immigrant from Pakistan, and his story a uniquely American one. A proud father of two, Joe comes from a family that includes Muslims, Jews, and Christians. Joe’s father came to this country in search of opportunity, studied engineering, and then devoted his career as a city engineer to building a more vibrant, connected Philadelphia. Joe’s father even engineered the public transit line from downtown to the airport, the very same transit line that his son would ride to the airport to protest Trump’s disgraceful Muslim ban.

Joe Khan is a lifelong public servant and progressive who has prosecuted hate crimes and stood up for some of the most vulnerable people in our society, including survivors of domestic abuse and sexual assault. He studied law at the University of Chicago under President Obama, and worked on Obama’s first run for Congress. Now, Joe is running for office himself, and is a leader I am proud to support.

Joe will resist the Trump administration by giving a voice to the voiceless. He will block any cooperation with Trump’s deportation forces, and will be a fierce advocate for liberty and equality for all, regardless of race or religion. As Pennsylvania’s first ever Pakistani-American District Attorney, Joe will be a powerful reminder that our nation of immigrants is stronger when we embrace our shared values of tolerance and compassion.

I hope you’ll join me in supporting Joe Khan, and send a message to Donald Trump that we won’t give up the values that made America great without a fight.”