Aaron Out will no longer touch the Turkey Shortis. Talk about a loss of street cred. 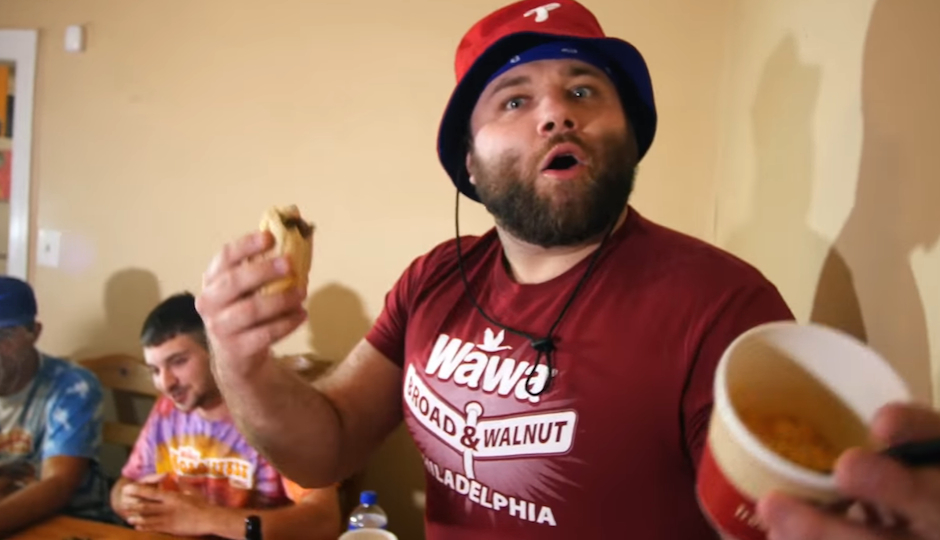 Earlier today, we told you about the amazing new “Wawa Hoagies” video from Philly rapper Aaron Out, a 2011 Abington High grad. Here, the East Falls-based emcee tells us all about it.

What possessed you to make a rap about Wawa hoagies?
I was at work one day, and I forgot my lunch. I hadn’t eaten. I was pretty stressed and tired, and I went to Wawa and smelled the deli food, and I just thought, I should try to make a song about it.

What’s your background in music?
None, really. I mean, I am very active on the battle rapping scene. I’ve been doing that for a little over a year. It’s really gritty and intense, more like boxing. But this is my first song.

So you just went home and started writing?
Yeah, I wrote the first verse in about 20 minutes and another 20 to write the second. My friend and roommate IrCasim has been producing for a long time, and so he started making the beats. I wanted a different beat at first, more of a hyper beat, but he was totally against that, and I’m so glad he was. He was right.

What did the managers at Wawa think when you started showing up there with cameras?
That was something I really worried about. We don’t know the legality behind filming in the stores. Some of them didn’t ask anything. Some of them asked, and we said we were doing a school project.

Were you?
No, I’m a laborer. I do masonry work. I’m building a fence right now. So I guess we basically lied to them.

Which Wawas did you shoot at?
Over five or six months, we got the scenes at the one in Roslyn down the street from the house I grew up in, Glenside or maybe that’s Cheltenham, Jenkintown and Willow Grove.

None in the city? Lame!
Ha. We were using the ones we thought might be less crowded. But my friend who works at the big new Wawa on Broad Street supplied the shirts.

Are you actually trying to jumpstart your rap career, or is this just for fun?
I was hoping for 10,000 views in a week, and it’s on track to do a little better than that. I can do more than make funny songs about Wawa, but this is a way to generate some publicity. But I can’t make any money on it. I mean, legally speaking, Wawa is trademarked, and I’m still not sure what’s legal and what is not.

But if you get sued by Wawa, it might improve your street cred.
I’ve been saying that too, man.

How many times do you eat at Wawa per week? And Turkey Shorti or Meatball Shorti?
I feel bad admitting this, but in January, I changed my diet. I’m a vegan. Before that, a Turkey Classic all day. I’m a big guy, so I get a Classic. My usual order was a Turkey Classic with tomatoes, lettuce, bacon and then I’d change up the condiments, sometimes horseradish sauce, sometimes honey mustard. And always with the Wawa Half-and-Half Iced Tea Lemonade.

But your turkey days are gone. How sad.
I did stop in there recently and get a veggie hoagie with the works. But I still stop there a lot for my cigarettes and other stuff.