A New $10M Program Will Improve Access to STEM Opportunities for Women, Black and Latinx Students in Philly

The initiative led by GlaxoSmithKline will fund programs that close gaps in the region’s workforce pipeline and give career opportunities to underrepresented groups in science, technology, engineering and math. 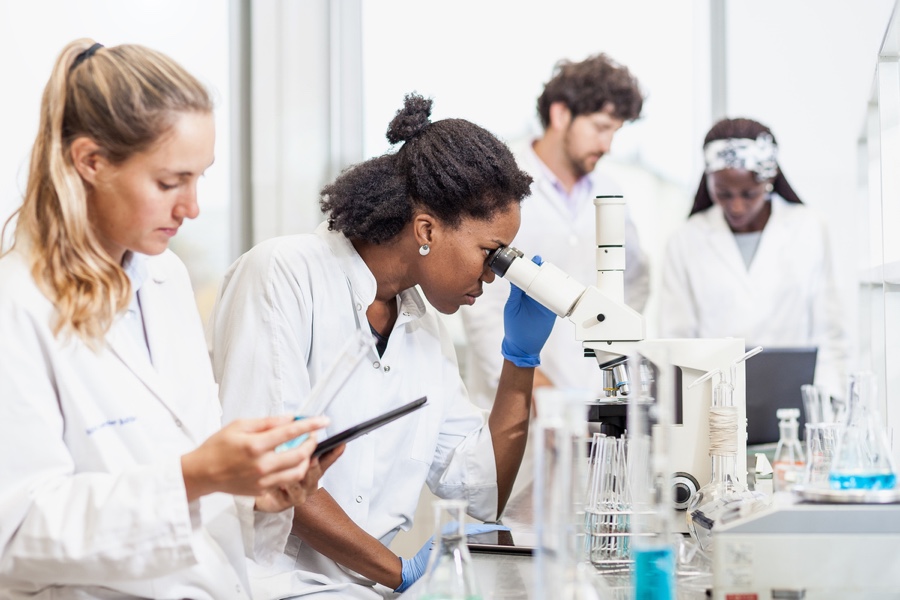 A new grant will fund programs supporting women and Black and Latinx students in STEM. | iStock

Mariah Wright-Moses, a junior at String Theory Schools, remembers the exact day when she first dissected a dogfish shark in her physiology class. That was the day she realized she wanted to pursue a career in science.

“It sparked an interest in me because I realized that I could do a career like this and really impact the world,” she said.

Her love of science came much earlier thanks to local programs that allowed her to explore activities in science, technology, engineering and math as early as seventh grade.

A new initiative backed by the recently formed Philadelphia STEM Equity Collective and led by global healthcare giant GlaxoSmithKline (GSK) will contribute $10 million over the next 10 years to programs in Philadelphia that help students like Wright-Moses follow through with their pursuit of careers in STEM. The Collective will work with schools, after-school programs, universities and colleges, employers, local government, and the philanthropic community to identify and close gaps confronting children from backgrounds underrepresented in STEM.

“It is up to us to clear the path for the next generation of nurses and doctors and scientists – for the next generation of the heroes who call Philadelphia home,” Maya Martinez-Davis, GSK president of U.S. Pharmaceuticals, said at a virtual press conference announcement on Wednesday. “GSK’s investment will provide backbone support for collective action. It will enable partners to dig in and seek to surmount the barriers that stand in the way of students from all of the city’s neighborhoods.”

The investment will undoubtedly be a boon for Philly, which is home to the first college of pharmacy, the nation’s first medical school, and groundbreaking innovation in gene and cell therapy, but lacks a defined path for students and young professionals to pursue careers in STEM.

Philadelphia is the nation’s eighth-largest STEM industry hub. But according to Phil Brooks, the director of STEM Workforce Partnerships at the University City Science Center, there are not enough trained workers to fill existing jobs in the life sciences, and with the anticipated rapid growth of the industry, the gap is projected to widen.

In Philadelphia, the problem begins in middle school and high school, where Keystone exam results show the city’s students lag behind their Commonwealth peers in STEM literacy. According to the National Math and Science Initiative, only 36 percent of all U.S. high school graduates are ready to take a college-level science course. It extends to colleges, universities and the professional development realm, where associate dean of biomedical studies at the Wistar Institute Kristy Shuda McGuire says aspiring scientists often lack access to education and training opportunities that would make them eligible for jobs in STEM.

“We kept hearing that the minimum requirement for many biotech companies was a bachelor’s degree,” McGuire explained. “But even a bachelor’s degree isn’t enough. They need actual hands-on research experience and they need some business know-how.”

Lack of access to proper training is only the beginning of barriers for women, and Black and Latinx people who wish to pursue careers in STEM because they are already sorely underrepresented in these fields.

At Wednesday’s announcement, Martinez-Davis was joined by Farah Jimenez, president and chief executive officer of the Philadelphia Education Fund (PEF); Philadelphia mayor Jim Kenney; Philadelphia School District superintendent William Hite; and Matt Stem, deputy secretary of the Office of Elementary and Secondary Education for the Pennsylvania Department of Education. The Collective members committed to ensuring this investment specifically advances underrepresented students into careers in STEM. To do so, they’ll employ a local organization, Equal Measure, to develop a shared dashboard that will help the Collective track and achieve its goals.

“We’ll be very intentional about ensuring that the students that are moving ahead are Black, Latinx and female students and that we’re changing not only the number of STEM careers overall that students are able to enter in Philadelphia, but really making that proportional to the representation of students in Philadelphia,” said Becki Lynch, Director of US Community Partnerships for GSK.

The Collective will run an annual RFP process to eligible nonprofit organizations who are participating in the Collective or are part of the Philadelphia STEM Ecosystem. The first RFP has already been issued and Collective partners have begun reviewing proposals for funding.

A Boost to Efforts in Progress

There is no shortage of local programs worthy of receiving funding to strengthen their STEM education efforts.

With additional funding, resources and support from the Collective, programs like these could soar.

Educators like David Zuzga, associate professor and chair of the department of biology at La Salle, say the investment is likely to have an impact, especially for underrepresented students in STEM.

“GSK’s commitment and the creation of the STEM Equity Collective will help establish a just, equitable and inclusive STEM pipeline that inspires traditionally underrepresented minority students, supports their growth and education through college, and connects them to academic and industry careers,” Zuzga said.

“The Science Center is actively working to close that gap by connecting students and adults to STEM career pathways through our youth STEM education and Workforce Development initiatives,” he said. “The creation of the Philadelphia STEM Equity Collective supports those efforts and reinforces GSK’s longstanding commitment to addressing this need. We believe this investment will have a strong impact on improving the diversity of the region’s STEM talent pipeline.”

No one is more excited about that than Wright-Moses.

“I’m lucky to have been in these science programs but students who go to certain schools in the city don’t get to learn what I’ve learned about science,” she said. “As an African-American female in the science field, it’s exciting to see this organization is willing to help minority groups get the chance to work in the science field.”