From fighting autoimmune diseases to destroying tumors, these are the bold ideas bubbling up from the city’s burgeoning scene. 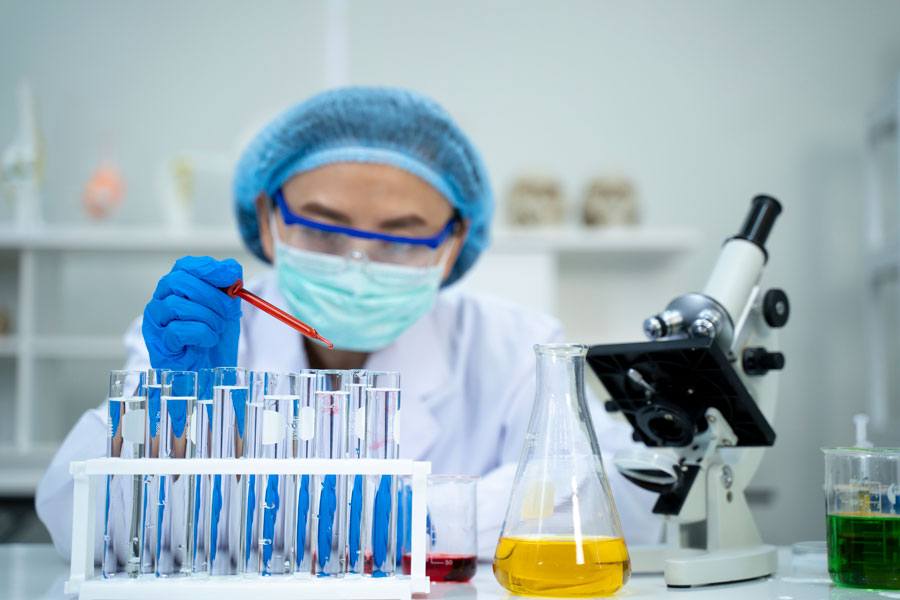 Meet the Philadelphia cell and gene therapy companies on the cutting edge of innovation. Photograph by Seksan Mongkhonkhamsao/Getty Images

In the average adult body, beneath 22 square feet of skin and clustered around more than 650 skeletal muscles, there are as many as 37 trillion cells and 25,000 genes brimming with the potential to heal. Philadelphia scientists recognize this promise — it’s why they’re working on new ways to give our cells and genes the extra push they need by re-engineering them to fight and kill disease.

As the world battles enduring threats like the novel coronavirus and races to develop vaccines and treatments, every Philadelphia discovery counts. Eighty percent of the world’s largest pharmaceutical companies have a presence here. The region is home to four schools of pharmacy and seven schools of medicine, in which one in every six doctors in the country has trained. Now, more than 30 companies and 60 labs in the region are inventing ways to empower the body to combat disease through cell and gene therapy. In cell therapy, scientists introduce healthy cells in patients with damaged ones in order to fight disease. In gene therapy, scientists deliver new genes into the body or turn off or correct defective genes to combat disease.

The odyssey of these therapies began more than three decades ago, with a series of starts and major stops. In the United States, researchers at the University of Pennsylvania were among the first to launch a comprehensive effort to discover new gene therapies, only to see failed clinical trials and a wrongful death lawsuit dissolve efforts by the early 2000s. Success in multiple countries, though, eventually led to the commercialization of a few drugs, including Glybera, a gene therapy for a rare inherited disorder that can cause a severe combination of pancreatic inflammation and extreme abdominal pain. But at $1 million, the world’s most expensive treatment was simply too expensive. The drug was discontinued just five years after it was first approved in 2012.

Yet only months after Glybera’s creators pulled it from the European market, the U.S. Food and Drug Administration approved not one but two Philadelphia-born therapies. The first was Kymriah, a groundbreaking cell therapy developed by researchers from Penn and the Children’s Hospital of Philadelphia (CHOP) to treat young people with acute lymphoblastic leukemia. Later that year, another team of researchers from Penn and CHOP gained approval for Luxturna, a gene therapy for the treatment of a rare inherited form of blindness. Both treatments are the first of their kinds to ever be approved in this country.

To some observers, the successes of Luxturna and Spark seemed like lucky breaks, special sets of circumstances that would be nearly impossible to repeat. But the new companies cropping up in Philadelphia’s health-care scene, working on cell and gene therapies for cancer, heart disease, autoimmune diseases, neurological disorders and more, say that isn’t so. Life science companies, which account for as many as 45,000 area jobs and more than $745 million of the venture capital pumped into deals here in 2019, insist this is more than a moment: It’s a movement, and all eyes are on Philadelphia. These are the companies leading the charge.

The South Philly-based company’s unique cell therapy platform engineers T-cells, the body’s pathogen-fighting task force, to target and destroy solid tumors. Naturally occurring T-cells struggle to recognize and fight cancer, so Adaptimmune has developed a method that alters T-cells so they can recognize cancer proteins and as a result detect and fight a wide range of cancers.

Founded: 2008
Funding: $670 million, including a $191 million IPO in 2015
Team: 400 worldwide, 150 in Philadelphia
Real estate: When Adaptimmune built a 47,400-square-foot manufacturing facility at the Navy Yard in 2015, the idea of a cell therapy company manufacturing in-house was unheard-of. The company’s foresight has given it complete control of process development, manufacturing and quality control for its proprietary T-cell therapies — a key advantage for any company in the industry.
Up next: Ongoing early clinical trials that address solid tumors, liver cancer, and synovial sarcoma are in the works, with plans to launch an inaugural commercial treatment for sarcoma patients in 2022.

Cabaletta founders Aimee Payne and Michael Milone have modified CAR technology — the popular chimeric antigen receptor method that’s enabled the development of successful cell therapies — to selectively target and eliminate auto-immune-disease-causing B cells. B cells typically help dispel foreign pathogens in the body, but they can worsen the course of disease in patients with autoimmune disorders. Chimeric autoantibody receptors (CAAR), the company’s modification to currently approved CAR products, are precise and don’t kill all B cells in a patient’s body. This advance has the potential to lower the risk of serious side effects associated with current therapies, providing relief for patients with varying autoimmune diseases.

Founded: 2017
Funding: $168 million, including an $80 million IPO in 2019
Team: 22
Up next: By the end of 2020, the company expects to have initiated a Phase 1 trial for patients with relapsed or refractory mucosal pemphigus vulgaris (mPV), a chronic autoimmune disease that causes painful blisters throughout the body and has no cure.

Engineering white blood cells to fight back against cancer, Parkinson’s, and autoimmune diseases

Carisma is the only company that has successfully determined how to genetically alter human macrophages, the giant white blood cells in our bodies that devour bacteria, viruses, and other disease-causing agents. The method modifies macrophages to find and combat cancer cells while sparing normal tissue. The company is addressing the challenges involved in treating solid tumors with the help of CAR technology, by actively trafficking to the site, selectively killing tumor cells by “eating” them, “warming up” the tumor microenvironment, and triggering a vaccine effect by activating the patient’s intrinsic immunity. In addition to treating solid-tumor cancers, the therapy could fight other serious diseases such as neurodegeneration, fibrosis, and inflammatory disorders.

Founded: 2016
Funding: $59 million
Team: 30
Up next: Carisma plans to initiate a clinical trial for certain types of breast, lung and gastric cancers. This will be the first time an engineered macrophage will be used in a clinical trial.
Quotable: “With Carisma’s unmatched expertise in engineering macrophages, the company is driving the future of immunotherapy forward while providing cancer patients with a potentially life-changing treatment option.” — Michael Klichinsky, scientific co-founder

Castle Creek Pharmaceuticals and Fibrocell Science combined to create Castle Creek Biosciences in 2019, with the goal of advancing a new gene therapy platform to treat a range of rare genetic diseases and skin disorders. The company’s lead gene therapy candidate is being developed to treat recessive dystrophic epidermolysis bullosa, a debilitating genetic blistering disease that affects kids referred to as “butterfly children” — even the slightest touch, rub or scratch can lead to severe blistering or the loss of large patches of skin.

Century is using healthy adult donor cells to engineer induced pluripotent stem cells, or iPSCs, which are cells that have been genetically reprogrammed to a nascent state. Scientists can use the cells in this form to develop any kind of cell needed for therapeutic purposes. The process will allow the company to produce cells en masse for use in a large number of patients. (Current cell therapies are patient-specific, meaning they’re designed to treat one patient per therapy, creating a lengthy and expensive manufacturing process.)

Founded: 2018
Funding: $250 million
Team: More than 60
Up next: Century plans to prove that its technology can make cell therapies easier to manufacture, more affordable for patients, and more effective against broader types of cancer.
Quotable: “Our key aspiration is to expand patient access to these life-saving therapies. We believe our technology will enable us to realize that vision by making products that are available off the shelf.” — Osvaldo “Lalo” Flores, CEO

Imvax is working on a cure for glioblastoma multiforme, one of the most common types of brain cancer in adults and the most lethal. As few as five percent of people with glioblastoma survive five years beyond a diagnosis; this is the cancer that killed U.S. Senator John McCain, who died just over a year after his cancer’s detection. The company harnesses the patient’s immune system to fight glioblastoma and other solid tumor cancers. What makes Imvax’s treatment unique is the company’s vaccine delivery process.

Founded: 2015
Funding: $40 million
Team: 12
Up next: In 2021, Imvax will launch a multi-center Phase 2 study to test the efficacy of its treatment for patients living with glioblastoma.

Sharpening the efficacy of gene therapy for nervous-system diseases

Gene therapy relies on viruses as vectors to help transport therapeutic genes to a patient’s cells. Because viruses have the power to attack their hosts and inject their genetic material into the body, scientists can remove the genes in the virus that cause disease and use their capabilities to transfer “good” genes into a patient’s cells. Passage is improving the power of these viral vectors. In collaboration with Penn’s Gene Therapy Program, Passage has identified the viral vectors best suited for use in therapies that treat rare central nervous system diseases. The company carefully selects vectors through rigorous testing to find the type and the delivery process that will provide the greatest advantage against a particular disease based on safety, delivery and effectiveness.

Founded: 2017
Funding: $387 million, including a $232 million IPO in 2020
Team: 30
Up next: Following a successful IPO in late February (during one of the country’s worst stock market declines), Passage plans to initiate a clinical study in the second half of 2020 for a drug that treats infants with GM1 gangliosidosis, a rare pediatric disorder that destroys nerve cells, causing paralysis or early death.

Now part of the Roche Group following its $4.3 billion acquisition in late 2019, Spark — developer of the blindness treatment Luxturna — is scaling the number of employees at its West Philadelphia research and manufacturing facility to reach its vision: a world where no life is limited by genetic disease. The company will advance research programs for more gene therapies to treat patients living with a wide range of genetic disorders, including blindness, hemophilia, lysosomal storage disorders (diseases that affect metabolism), and neurodegenerative diseases.

Founded: 2013
Funding: $1 billion-plus
Team: More than 450
Quote: “Spark Therapeutics is the first company that has successfully marketed a gene therapy product for a genetic disease in the U.S. We are proud to have achieved this milestone in our hometown of Philadelphia. Roche will help Spark accelerate the development of more gene therapies. Combining our unique skill sets opens a new chapter of promise and possibility for gene therapy.” — Jeff Marrazzo, CEO

Tmunity is developing the next iteration of the T-cell therapy that produced Kymriah, the first FDA-approved cell therapy for young patients with acute lymphoblastic leukemia. The therapy involves removing T-cells from a patient’s blood, modifying them in a lab, and injecting them back into the bloodstream to boost the immune system’s ability to fight cancer cells. Five of Tmunity’s scientific founders are researchers from Penn; they developed the original therapy and have since granted some exclusive rights to Tmunity to use the technology to create new therapies. The company’s robust pipeline boasts 10 programs aimed at treating autoimmune diseases and cancerous solid and liquid tumors.

Published as “Yes, Science Can Save Us.” in the May 2020 issue of Philadelphia magazine.