Biotech Tour: An Inside Look at the Cell Therapy Manufacturing Process

At its Navy Yard facility, Adaptimmune is working to develop the next generation of T-cell treatments for solid tumor cancers. 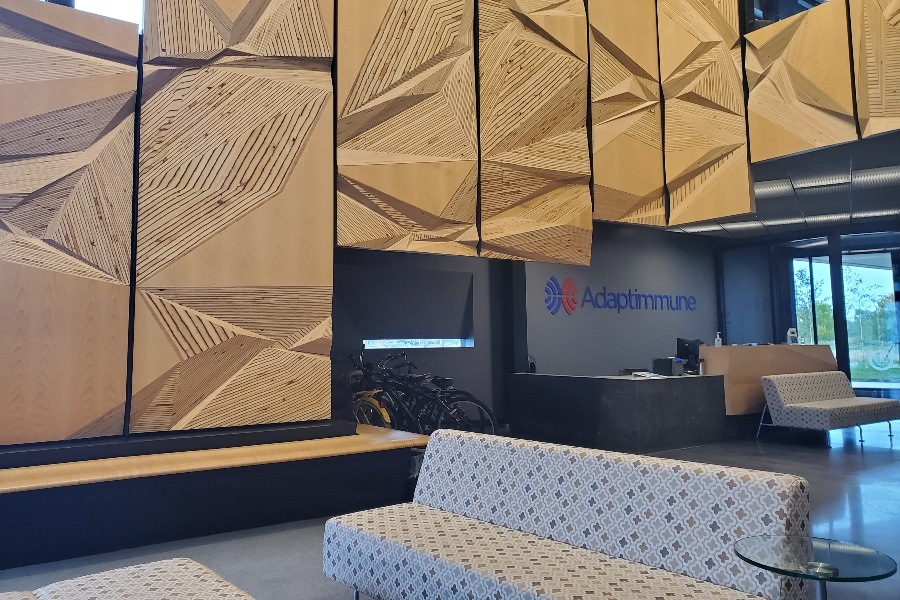 Adaptimmune is one of more than 30 companies in the region working to perfect cell and gene therapy, the groundbreaking treatments that use a patient’s enhanced cells or genes to fight cancer and other deadly diseases. With its global headquarters located in the U.K., the biopharmaceutical company was founded in 2008 under the leadership of immunotherapy pioneers Steven Rosenberg and Carl June. In 2017, Adaptimmune opened its U.S. headquarters at the Philadelphia Navy Yard after the company outgrew its space at the University City Science Center where it had been operating since 2011.

At the Navy Yard, Adaptimmune’s 150-employee team is working to bring new T-cell therapies to market with hopes of treating a wide range of cancer types and patients.

T-cell therapy is an intricate process through which a doctor extracts a patient’s T-cells, modifies them in a lab and then infuses the cells back into the patient’s body. In the lab, the patient’s cells are programmed to recognize and attack specific targets on cancer cells in the body. While most T-cell therapies that have been successful to date have applied the process to blood cancers like leukemia or lymphoma, Adaptimmune is targeting cancers that form as solid tumors, like sarcomas and carcinomas. The company’s proprietary SPEAR (Specific Peptide Enhanced Affinity Receptor) T-cell therapy engineers a patient’s own T-cells to target and potentially destroy tumors.

The 17-step process takes roughly 30 days from start to finish and relies on speedy couriers, sophisticated machinery, and a team of as many as 60 scientists.

But it all begins with a willing patient.

To start, researchers travel to a local hospital to collect specific components of a cancer patient’s blood cells using a process called apheresis. There they first pack a patient’s blood cells in an insulated shipper called the NanoCool, then place the NanoCool in a larger Cryoport shipper that runs on liquid nitrogen and includes a monitor to ensure the package maintains a steady temperature. Researchers use a GPS tracker to monitor the package during transit. 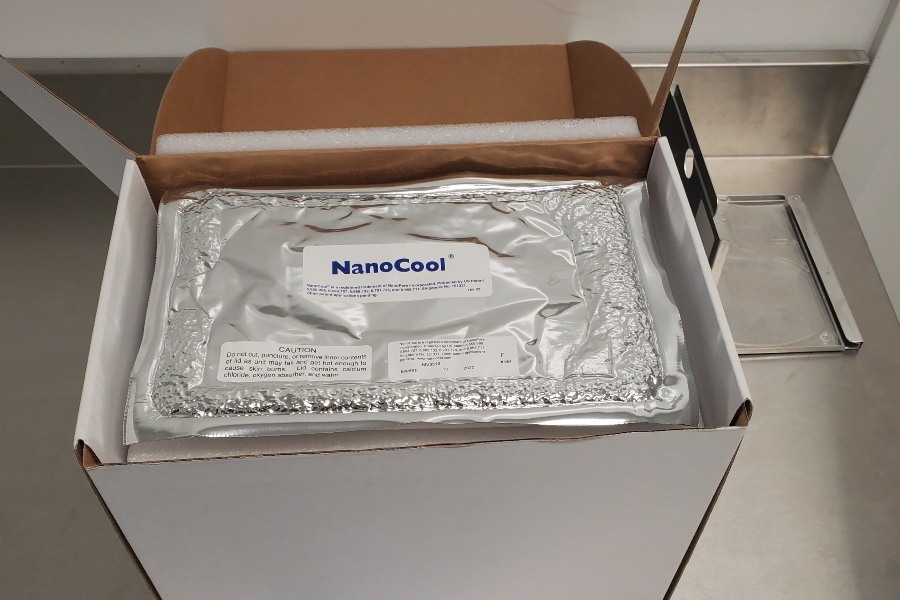 Adaptimmune transports patients’ blood cells in an insulated shipper called the NanoCool. The shipper includes a temperature monitor to ensure the package remains at a cool two- to eight-degree Celsius temperature. / Queen Muse

Once the package is at Adaptimmune’s manufacturing facility, researchers remove the patient’s cells from the shipper and washed them in an automated device. Finally, the washed cells are placed in a controlled-rate freezer to begin the process of cryopreservation. Freezers are set to a chilly -130 degrees Celsius.

The first 48 hours, and every moment thereafter in the cell therapy manufacturing process, requires an organized shipping and distribution chain to ensure that patients’ cells and the resulting living medicines make it back to patients untainted and in a timely fashion for optimal outcomes. 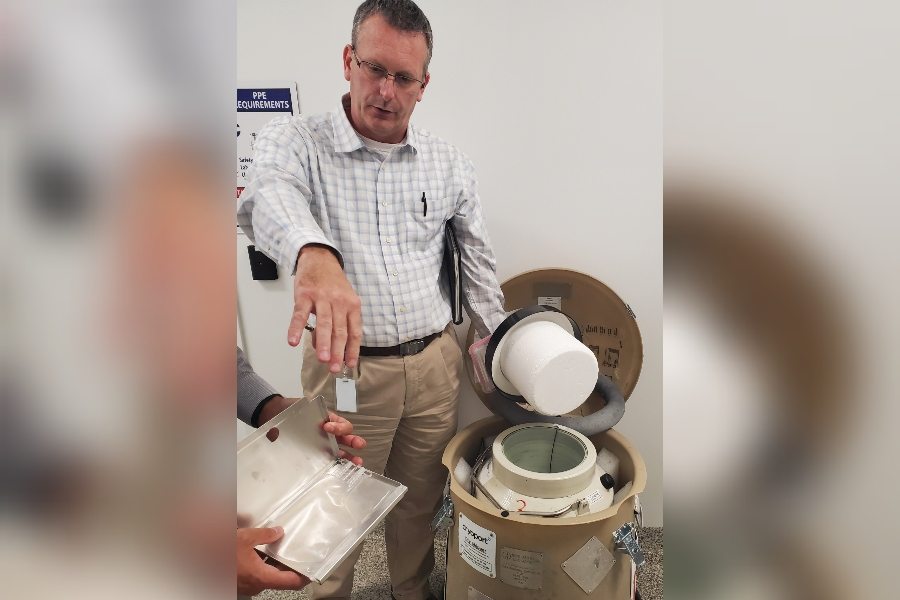 The patient’s cells are thawed using an automated device and washed a second time with a single-use disposable system. Researchers then begin to reengineer the patient’s cells with increased affinity T-cell receptors that enhance a patient’s immune response to cancer. 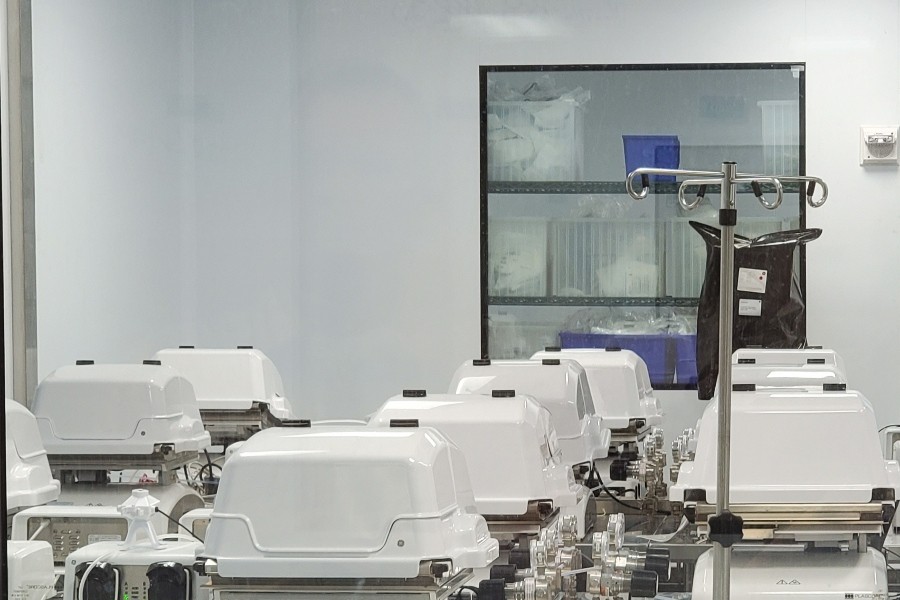 These bioreactors house a patient’s cells while they go through the process of expansion. / Queen Muse

Researchers rely on CTS DynaMag machines to separate desired T-cells from the rest of the patient’s blood sample components. The desired cells are then placed in a bioreactor for several days where they grow. Once the patient’s modified cells have been harvested using an automated device, they are analyzed to ensure the appropriate criteria have been met. World Courier then transports the final product to its designated infusion center where it is later thawed and infused back into the patient’s body.

“Delivering a patient’s cells rapidly and safely back to the hospital after the cells have been armed with our T-cell receptors is a crucial part of our supply process. Our previous experience with World Courier gave us confidence that they would be the best logistics partner for Adaptimmune and the patients we serve,” Lunger said.

The Goal in Sight

Adaptimmune has already seen some success with its SPEAR T-cell approach. In 2018, after a four-year collaborative agreement, GlaxoSmithKline (GSK) purchased exclusive rights to develop and potentially commercialize Adaptimmune’s NY-ESO SPEAR T-cell therapy. Adaptimmune received $27.5 million from the deal. In addition to building out and staffing its manufacturing facility, the company has put most of those funds toward clinical trials in multiple solid tumors for SPEAR T-cell therapies targeting MAGE-A10, MAGE-A4, and AFP proteins.

According to Helen Tayton-Martin, Adaptimmune’s chief business officer, the company currently has a total of six clinical trials enrolling patients at 27 sites across the U.S., Canada, Spain and the U.K. Despite the company’s roots in England, Tayton-Martin says Adaptimmune’s ties to Philadelphia are strong.

“We have a deep connection to Philadelphia. There is obviously the link with Carl June: We worked very closely with him in the early days and he really helped the company get off the ground,” Tayton-Martin explained. “Since then, we’ve been fortunate to find really talented people in Philadelphia. So, although the original origin of the company is based abroad, the company that we’ve subsequently built has very much benefitted from a real depth in the pharmaceutical industry, the development capabilities and the talent in the Philadelphia area.”

Adaptimmune’s lead product, ADP-A2M4, moved to a Phase II clinical trial earlier this year. The trial aims to treat up to 60 patients with inoperable or metastatic synovial sarcoma, or myxoid/round cell liposarcoma (MRCLS). The study is slated for completion in 2022.

If Adaptimmune’s T-cell therapy reaches the market, it’s likely to carry as hefty a price tag as its gene therapy predecessors, which also means the company has a chance to make a big profit.

But Adaptimmune is not the only company in Philly developing new T-cell treatments for solid tumors. Cellicon Valley companies like Tmunity and Iovance (which launched a pivotal trial for its lead product Lifileucel earlier this year) are also in the race to commercialize next-gen immunotherapies.

Competition aside, Adaptimmune’s senior director Juli Miller said it is patients who take away the true prize, no matter which company reaches the finish line first.

“We’re at the very beginning of developing this technology, and it’s probably going to take a couple of years to get it just right,” Miller said. “But there are no losers in cell therapy because it’s all about the patients. If someone else has a breakthrough, we can all use that new knowledge to move our treatments forward. It’s a collaborative community. We’re all focused on meeting the needs of the patients who don’t have any other treatment options.”