24 Places to Eat a Great Roast Pork Sandwich in Philadelphia

From Delco taverns to Northeast Philly corner shops, here are our favorite places to dig into Philly's other signature sandwich. 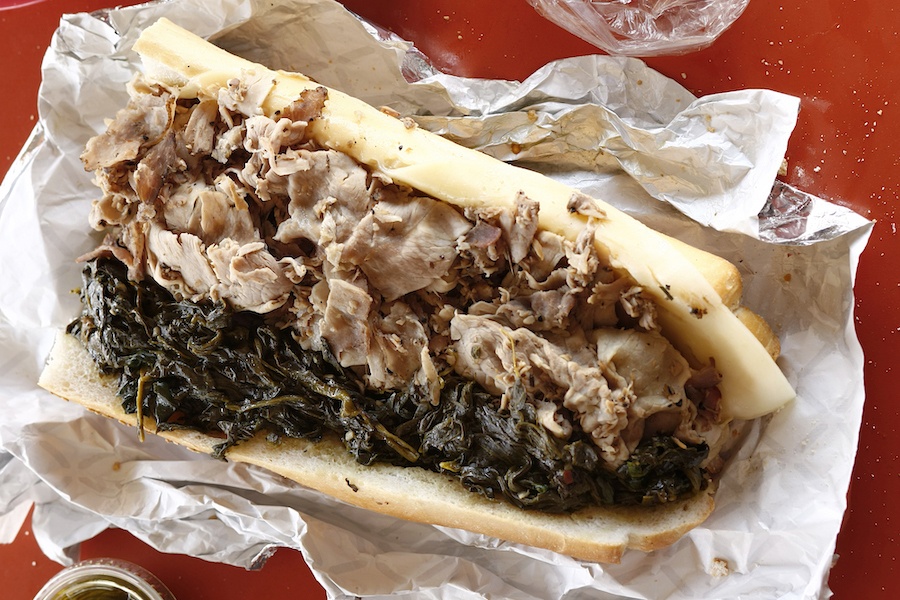 We here at Foobooz write about cheesesteaks…a lot. As much as the sandwich has become synonymous with Philadelphia to outsiders, it’s got a longstanding place in our shared civic and culinary history that deserves to be celebrated. But we all know that Philly’s best-kept secret is another meaty, cheesy, juicy delicacy that’s often overshadowed by its beefy sibling: the roast pork, either thinly sliced or torn into tender chunks and paired with garlicky sauteed broccoli rabe or spinach, sharp provolone, and sometimes peppers (sweet and tangy or spicy roasted long hots, take your pick). Here are our favorite places to dig into a roast pork sandwich in Philadelphia.

Frizwit, South Philly
Ari Miller’s pop-up turned main gig gets a lot of love for the cheesesteak, which is excellent. But the pork and greens, featuring pork butt from Primal Supply, beer braised farm greens, Caputo Brothers’ provolone, and a Merzbacher’s hoagie roll also deserves a place in your order.

Mi Pal’s, South Philly
Somehow, Mi Pal’s does every type of hoagie and does it well. Their roast pork is no exception and they do a couple of varieties, including one stacked with roasted long hots, and one soaked in gravy.

Porcos Porchetteria, Point Breeze
Porchetta isn’t exactly traditional in a Philly roast pork, but Chad Durkin’s rendition of the sandwich — served on housemade ciabatta with rapini pesto rather that braised greens — goes to show that the original isn’t the end-all be-all.

Lil’ Nick’s Deli, South Philly
Every neighborhood in Philly has one of those corner spots with unreasonably good sandwiches, and Lil’ Nick’s is one of ours. It’s the type of place that makes you fall in love with Philly’s hoagies – but the classic roast pork with broccoli rabe and thinly sliced pork loin – is a standout.

Poe’s Sandwich Joint, Olde Kensington
Poe’s lives in the back of Human Robot Brewing Company, and is run by Philly’s most beloved, outspoken weed activist. Their roast pork comes topped with long hots and horseradish aioli, and pairs nicely with whatever substance you prefer.

John’s Roast Pork, Pennsport
We love this Best of Philly-winning South Philly icon for its juicy, slightly spicy roast pork and tender sautéed spinach — and it doesn’t hurt that they earned an American Classics Award from the James Beard Foundation for it, either.

Tommy DiNic’s, Market East
If we could only put one sandwich on this list, this one just might be it — but unless you’ve got some time to kill in the line that regularly wraps around DiNic’s stall in Reading Terminal Market, try to get there before or after the lunch rush.

Tony’s Tavern, Collingdale
This Best of Philly-winning roast pork sandwich isn’t just worth going to Delco for. It’s worth getting there early on Thursday,  the only day of the week it’s served, because supplies are usually exhausted by 1 p.m. Broccoli rabe for breakfast, anyone?

Nick’s Old Original Roast Beef, South Philly, Springfield, and West Chester
This sandwich stalwart, in business under the same family since 1938, serves their thin-sliced roast pork with greens and provolone on a round Kaiser rather than a long roll.

Marinucci’s, Port Richmond and Northeast Philly
Looking for a roast pork sandwich with all the trimmings at this Northeast staple? Ask for the Brous Avenue, named for the street their Mayfair location calls home.

Memphis Taproom, Kensington
Sure, their menu leans Southern, but the gastropub pays hometown homage with their take on the classic slow-roasted pork sandwich, dressed up with baby spinach and garlicky mayo.

Johnny’s Hots, Northern Liberties
The northernmost stand on the Delaware Avenue-Columbus Boulevard sandwich trail, Johnny’s is known more for serving an excellent cheesesteak and a classic Philly hot dog than for its thin-sliced roast pork sandwich with all the trimmings. (We recommend you try both.)

Tony Luke’s, Multiple locations
Tony Luke Jr. and his sandwich empire have been through a lot the past few years, but those Best of Philly-winning roast sandwiches are still as great as ever (and you can get them at a Phillies game, too). 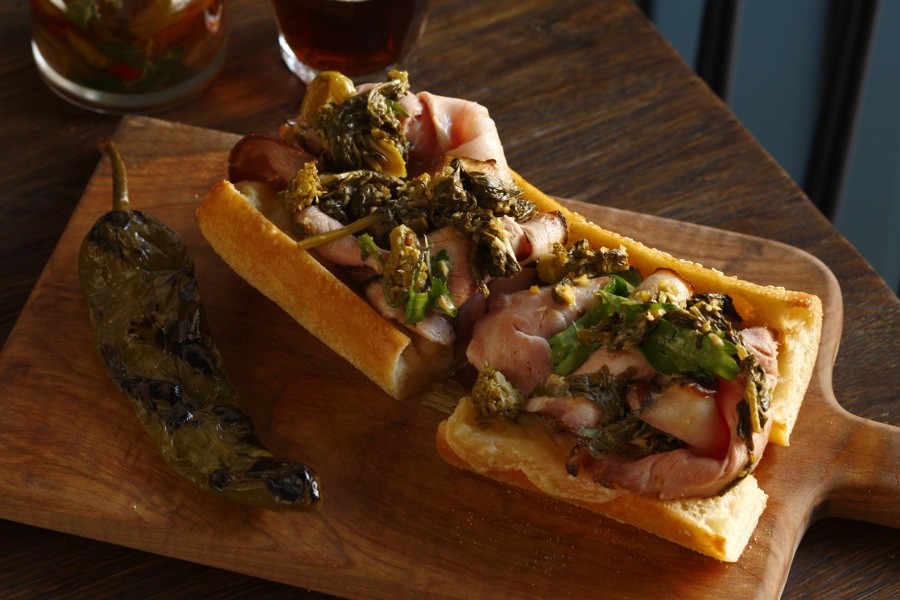 Cosmi’s Deli, East Passyunk
This neighborhood staple at 8th and Dickinson serves just about every sandwich under the sun — including a roast pork ‘wich you can customize to your liking (rabe or spinach, seeded bread or hoagie roll).

Shank’s Original, Queen Village
Order up the Roast Pork Italiano at this Pier 40 walk-up stand and take your pick of broccoli rabe or spinach to go along with your meat and sharp provolone.

Broadway Bar, Clifton Heights
This Delco watering hole has bar food on lock — but don’t sleep on their roast pork Italian, made with thin-sliced loin, and topped with sautéed spinach and sharp provolone. 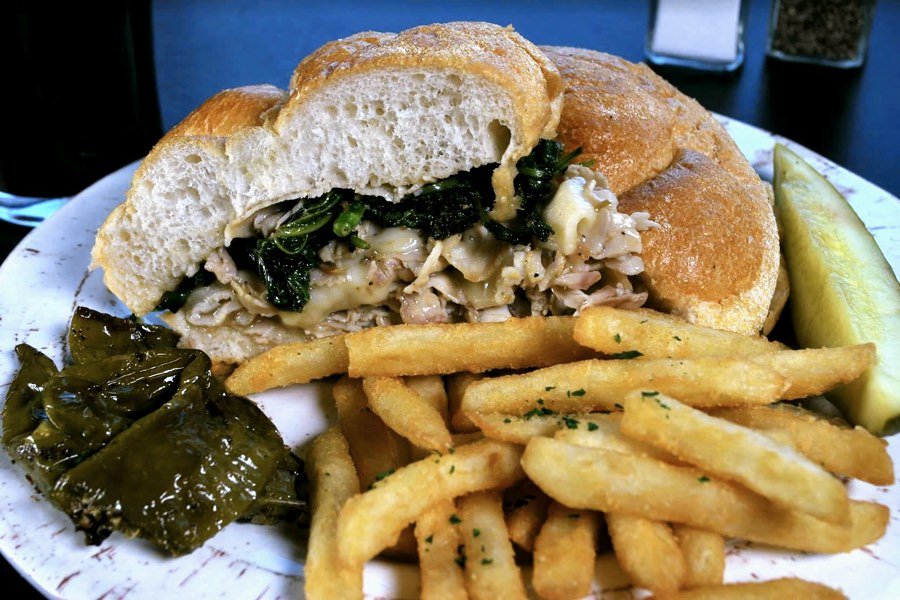 John Morton’s Tavern, Prospect Park
Delco, you’ve been holding out on us. The roast pork sandwich served on a Kaiser roll at this Delco pub is a sleeper hit. Take yours to the next level and order the Homesteader platter, half hand-carved roast beef and half pork, then dress it up with rabe and provolone.

George’s Sandwich Shop, Italian Market
This 80-plus-year-old sandwich stand on South 9th Street, which reopened last fall after the passing of its longtime proprietor, is best known for its sandwiches filled with tripe and tongue. If that sounds like a little much for you, stick with their PBR sandwich — pork with provolone and broccoli rabe.

Campo’s Deli, Old City
At this 72-year-old Market Street fixture, pork shoulder gets slow roasted for eight hours and pulled apart with a spoon before getting a dose of provolone and your choice of peppers and rabe or spinach.

Jack’s Place, Northeast Philly
This family-run corner spot is so sandwich-centric that they close for the day when they run out of rolls — so schedule your roast pork appointment accordingly.