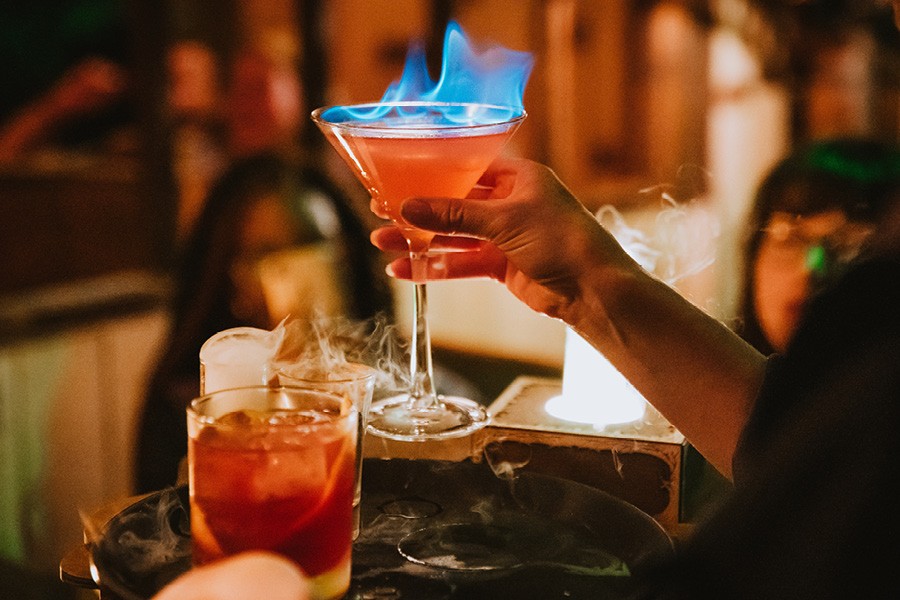 Howdy, buckaroos. Welcome to a surprisingly crowded edition of the Foobooz Weekly News Round-Up. We’ve got all kinds of things going on in the city right now — everything from a big reopening in Center City to a third act in the story of one of Philly’s most famous chefs — plus taco news, a burger update and more.

But we’re going to start this week off with some news about wizards. 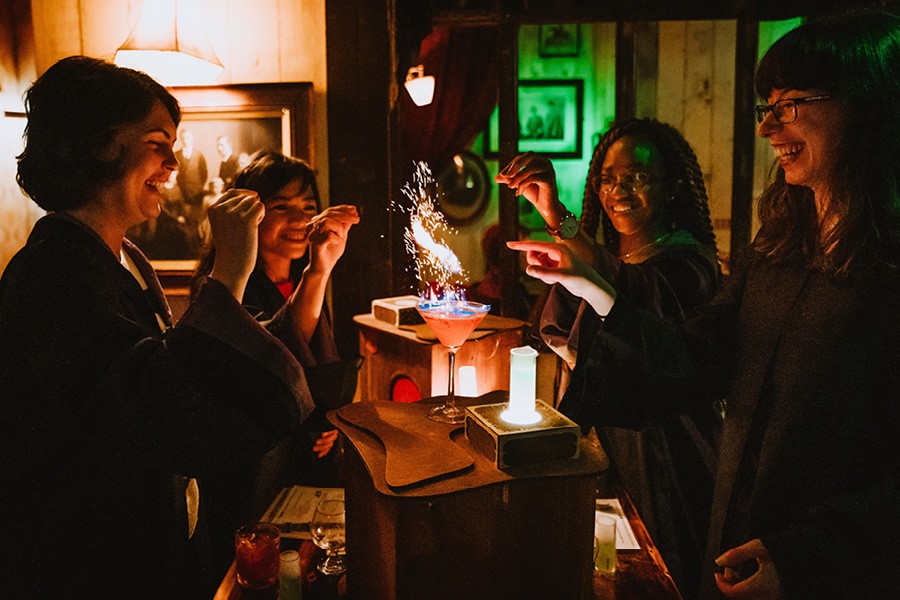 You know those craft kits they sell for kids? The ones that let them make their own slime or gummy candies or napalm or whatever, and that you only get when you forget about your weird nephew’s birthday until the last minute and can’t think of anything else to buy him?

Yeah, so imagine that, but as a bar and restaurant concept. Plus magic wands.

The Cauldron is “an immersive experience” in the shape of a restaurant — a walk-in molecular gastronomy bar and British gastropub with a side hustle as a ticketed series of “potion-making” cocktail classes with “working magic wands crafted using proprietary technology at The Cauldron’s workshop in London (U.K.),” according to a press release.

And sure, it all sounds strange and SUPER nerdy (which I wholeheartedly endorse), but dig this: The entire Cauldron concept was co-founded by Matthew Cortland, a South Jersey native and former teacher who launched a $500,000 Kickstarter to fund his dreams for a wizard-themed bar — and it worked. Dude got his wish, went to London, opened a heavily geeked-up tech workshop that’s half Harry Potter and half backstage-at-Westworld (without the murder robots), spent some time designing magic wands and a bunch of other widgets and gizmos, and opened his first Cauldron in London. He then expanded to Edinburgh, Dublin and New York City, and is now coming home (kinda) to Philly to open his second U.S. location this spring at 13th and Locust, right in the heart of Midtown Village.

There is no part of this story that I don’t love. Seriously, I respect the hell out of anyone who shoots their shot like this. And while my restaurant brain might be screaming about the pitfalls of running “interactive experiences” masquerading as restaurants and the culinary hazard of putting theme before cuisine when it comes to the food and beverage industry (see: all our reporting on Mad Rex), the geek in me is cheering. Loud.

So here’s what else I know right now: The Cauldron is looking at a spring opening. I feel pretty confident about that date because the joint is already taking reservations for potion-making classes starting May 20th.

The space will be two floors with a walk-in bar and restaurant downstairs featuring molecular cocktails showcasing a range of effects — like the Wizard of Menlo Park, inspired by Thomas Edison, that shoots smoke into the air, or The Blob with its aloe, tequila and expanding head. There’ll also be a food menu that leans heavy on British comfort foods: fish and chips that smoke, flaming cheese dip, Elven bread tied up inside a banana leaf and Turkish delight for convincing grumpy siblings to betray their family to the White Witch. Upstairs? That’s the classroom where they’ll be holding their one-hour-and-45-minute potion-making classes for adults, kids and families. You get a wizard robe to wear. A magic wand. You drink cocktails from the mouth of a sparkly unicorn. It sounds EXACTLY as weird and goofy as you’re imagining. And tickets start at $40 per person.

You can get all the information you need on The Cauldron’s Philly debut (plus some videos of the place in action) right here.

Over the past year or so, Jose Garces has used the uncertainty of the pandemic and its impact on the restaurant community to make a massive shift in his focus. We’ve talked quite a bit about the ways he’s been rebuilding his empire in these columns, but this week he made some pretty big announcements about the future directions of two of his surviving brands.

First, Garces is going to be opening two new locations of his Baja surf shack-inspired taco shop, Buena Onda, this spring. The first will be in Rittenhouse, at 114 South 20th Street. The second is opening out in the ’burbs — on the Main Line in Radnor, at 200 Radnor Chester Road. Both will be doing the same fish tacos, non-fish tacos, nachos, churros and margaritas that define Buena Onda, and rolling with the kind of laid-back, fast-casual, stoned-on-the-beach feeling that made the original launch of the brand so successful.

Speaking of the O.G. Fairmount location, it’ll be getting a refresh as well, and all of the locations will now operate with a pandemic-born love for delivery, takeout, Endless Summer vibes and pop-top booze — including beers and branded Buena Onda margaritas in cans.

That new Rittenhouse spot, though? That’s interesting. Because the address — right at 20th and Sansom — is where one of Garces’s other pandemic pivots lives. You remember Tinto, right? A one-time favorite for its Basque heart and excellent snacks, Tinto didn’t really make it through COVID whole. Last spring, it reopened as Tinto Pintxo — largely changing its focus to retail wine sales, with its own attached bottle shop.

But Buena Onda and Tinto Pintxo can’t both live there, right? One of ’em is gonna have to go.

And, as it turns out, it’s Tinto that’s moving on. But it isn’t closing, just moving to a new (and as yet undisclosed) location with an opening date sometime in the fall. When it does reopen, it’s going to be as a polished, expanded version of the new Tinto Pintxo concept: a wine shop with a heavy Spanish accent. Plus maybe also some snacks.

As we say ’round here: You’ll know more when we know more.

And now, how ’bout some more news from the ’burbs?

A Takeout Food Hall for King of Prussia

Okay, so speaking of pandemic innovations, check this out: Andrew Masciangelo and Yohann Zinier — the guys behind Savona restaurant in Gulph Mills — have just launched a big, seven-restaurant hybrid food hall called Pure Roots Provisions at 411 Swedeland Road in King of Prussia. This is cool for two reasons.

First, it’s a food hall — and that’s something that everyone wants more of around here, but we never seem to have enough of.

Second, it’s a hybrid food hall, born of the pandemic, shaped by the very specific needs of the community at a moment when actually going into a building, taking off your mask, and putting food in your face while surrounded by other people is a dodgy proposition at best. Pure Roots exists as a curbside pickup and local delivery operation ONLY. With seven restaurants all operating under one roof, it means to be a kind of one-stop shop for anything you might be craving.

So what is Pure Roots serving, exactly? I’m glad you asked. They’ve got Japanese seafood and Hawaiian cuisine from Hook’d, burgers and wings from Upstate (which is a PERFECT name, btw), Italian at Grazia, salads from Wonderleaf, barbecue at Sparq, baked goods from Breadbox and healthy breakfasts from Sunup. All of these places have their own crews and their own menus. They’re cooking everything fresh to order. They offer family meals and catering services. And, on top of all that, they’ve got their own team of delivery drivers making the drop-offs. Think of it like a very small, very efficient, very neighborhood-focused version of Doordash. More importantly, think of it as the solution to every time you get together with a bunch of friends, decide to order some food, and everyone kinda agrees on one place except one guy (looking at you, Jimmy) who only wants wings. Like, seriously, every time. Just wings. Everyone else feels like sushi? Jimmy wants wings. Everyone else cool with tacos? Jimmy wants wings.

Pure Roots Provisions is the solution to the Jimmy Problem. For that alone, it’s already genius.

Anyway, operations are currently up and running seven days a week from 8 a.m. to 8 p.m. The delivery area will be expanding soon and, depending on how things shake out over the next few months, they’re looking at expanding to dine-in service near the end of the summer. If you’re in the neighborhood, you can find menus, place an order or just check things out right here.

Giuseppe & Sons reopened last week in Center City after being dark for quite some time. Chef Ed Pinello has pared down the menu a bit, and seating is only being done in the downstairs dining room (the upstairs and outdoor dining spaces are still closed). But this is still good news for the crew and fans of G&S’s particular brand of Rat Pack Italian cuisine.

While on the subject of surprise reopenings, how ’bout this: Tacolab at Mission Taqueria has been shut down for something like two years at this point. But guess what? They’re coming back on Monday, January 24th, with a six-course collaboration dinner between Mission exec Jonathan Rodriguez and Randy Rucker from River Twice.

The menu looks killer. We’re talking puffy tacos with hay-smoked crema and Kaluga caviar, oyster pozole, sweetbread tacos and more. Tickets for the dinner will run $85 per person plus tax and gratuity (which makes that wizard thing seem like a bargain, right?), and reservations are opening Tuesday, January 18th, at 2 p.m. They are expected to sell out FAST, so if you’re down, make sure you’re fast with the clicking, okay? You can get the full menu and all the other info you need right here.

And finally, a quick update on something I told you about last week: The opening of the Two Robbers flagship restaurant location in Fishtown.

All I really knew at the time was that local hard seltzer company Two Robbers was getting into the restaurant business with the opening of a spot called Burgers and Seltzers at 1221 Frankford Avenue.

Now, though, I can tell you that this is going to be a BIG joint — 4,000 square feet of indoor and outdoor space with a retail store, art installations, a drinks program done in collaboration with rock star NYC bartender Dan Greenbaum, and a burger restaurant doing smash burgers and burger-adjacent sides while also operating like a combination laboratory-demo space for Two Robbers to showcase some of their as-yet unreleased products like a hard kombucha, fruited seltzers and hard nitro cold brew. The space will also function as Two Robbers’s company HQ.

Still no word on an opening date. But check back in next week. Who knows what I’ll have for you then.