Plus, an artist residency at Kalaya, Garces teams up with local talent at Volver, and everything to know about this year's Whiskey Fest. 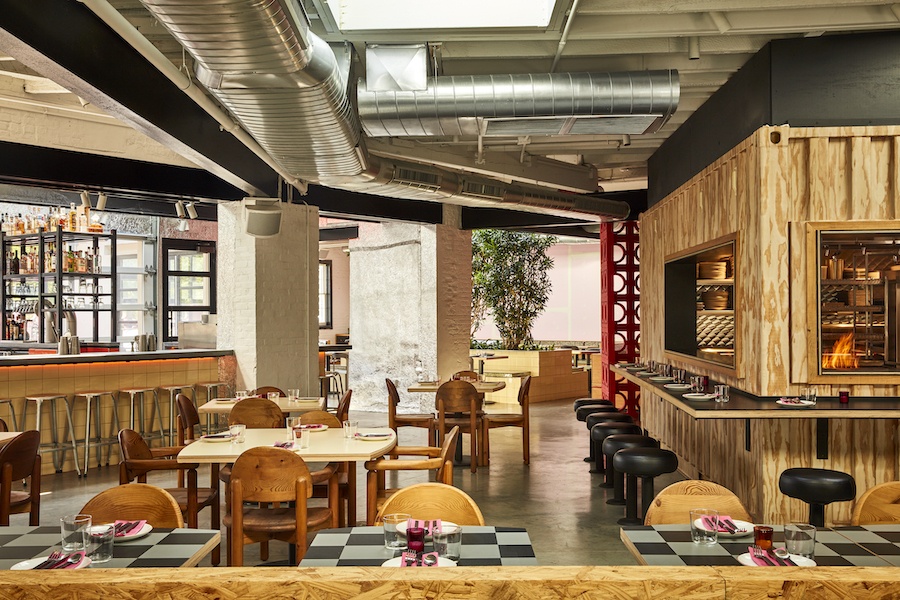 Happy Monday, everyone, and welcome back to our Monday round-up. Looking to get up to speed on all the food news that matters this week? Then you have absolutely come to the right place.

And we’ve got some big news this week, so let’s get right to it, shall we?

Stephen Starr Is Back

Unless I’m forgetting something, Stephen Starr hasn’t opened a new restaurant in Philly since 2017. That was when he and repeat-collaborator Aimee Olexy opened the Love in Rittenhouse — a lovely, loud, crowded, expensive indulgence where every dinner is kind of like the restaurant-world equivalent of spending a lot of money on a magic sweater that makes it always the first, perfect week of fall whenever you put it on.

It’s not like Starr hasn’t been busy during the intervening years. He has something like 36 restaurants in five different cities now, some awards, a lot of fancy friends. He’s a big deal in every market he moves into these days, but Philly is still hearth and home for the big man, so it’s been kinda weird that he’s been away for so long, right? I mean, sure. There was that whole deadly global pandemic thing that pretty much crippled the entire restaurant industry and has, even now, left it wounded and gasping.

Anyway, that streak ends this week with the announcement that his new … experience (for lack of a more appropriate term) is opening at 1749 Front Street in Fishtown on Wednesday, October 6th.

Back to restaurant stuff.

LMNO is, like all Starr joints these days, a collaboration. For this one, he’s brought in Serge Becker, a creative director, restaurant and nightclub designer, artist, music video director and big fan of very small hats (seriously, click the Wikipedia link). Becker is the French/Swiss agent provocateur behind the boom in highly theatricalized NYC restaurant/nightlife fusions. He was the designer behind places like the Box, La Esquina, Bodega Negra, and Miss Lily’s (along with dozens of others), and now he’s throwing in with Starr to open a combination Baja-style Mexican restaurant/bookstore/art gallery/music venue with seating for 200, a live-fire grill in the middle of the main dining room, a bookshop curated by Dashwood Books, and lots of tacos.

Everything at LMNO is kind of mashed together. You can eat in the bookshop, listen to music in the dining room, look at the art pretty much everywhere. “It’s a dynamic space,” Starr says. “Beyond a laid back, authentic dining experience, [it] lends itself to live music, art exhibits, DJ sets, workshops, cooking classes, and anything collaborative.”

Speaking of ‘collaborative,’ he brought in Mexican chef Javier Plascencia to consult on the menu which will showcase Baja-style cuisine. We’re talking aguachiles and ceviche, pork shoulder off two trompos rotating over that big grill, tacos slapped together from beer-battered fish or pork suadero crisped up on the plancha, plus large-format dishes meant for sharing. The cocktails lean heavily on tequila and mezcal. The furniture is all vintage ’70s and ’80s stuff and the inaugural art exhibit is a rotating photo show from Bill Bernstein featuring his iconic ’70s disco snaps, capturing the scenes at places like the Loft, GG Barnum’s, Xenon and Studio 54.

And just in case us Gen-X kids weren’t feeling old enough right now, in the bookshop, they’re going to be selling “a custom zine which corresponds with the current photography exhibit.” It literally hurt me to write that line. Please excuse me a moment while I go turn to old dust in the corner.

LMNO will be merging “lo-fi sensibilities with a vibrant, eclectic atmosphere” starting this Wednesday. You can make reservations and check out the full menu right here. 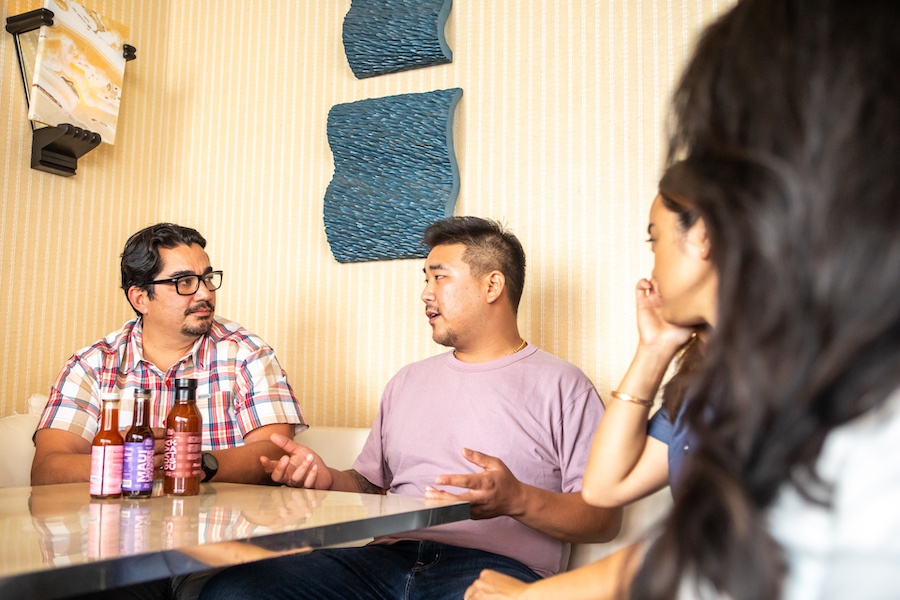 Remember last week when I told you about Jose Garces going all-in on ghost kitchens? And remember when I told you that Phila Lorn (who was cooking a benefit dinner with Bobby Saritsoglou at Stina) had some super-secret thing going with Garces that he wasn’t allowed to talk about until Ghost Chef Garces announced it?

Late last week, word came down that Garces was re-opening Volver at the Kimmel Center. After being dark since March of 2020, both Volver and the Kimmel Center Cultural Campus have now officially switched back on the lights. Volver started service again on September 26th, which is absolutely good news. But it’s what’s happening this week that’s really exciting.

Beginning October 6th, Garces is launching a new Chefs in Residency program that will “spotlight the region’s top rising stars and emerging chefs, with a focus on minority chefs that were affected by the pandemic.” He’s starting off with Kiki Aranita from Poi Dog (who, oddly, was also featured in last week’s column) on the 6th. She’ll be followed by Phila Lorn on December 1st, then Jezabel Careaga from Jezabel’s, Jennifer Zavala from Juana Tamale, Alex Yoon from Little Fish and Dane DeMarco of Sonny’s Cocktail Bar. Each Chef in Residence will get to show off their top signature dishes on Volver’s menu (alongside Garces and his crew’s regular board). But that’s not all. In addition to showcasing their best dishes, each chef “will have the opportunity to raise money to support their work with their current restaurant, or to use for the start of their next culinary journey” through a donation program operating in partnership with the Garces Foundation that will provide “resources and matching grants” to each chef.

Volver is up and running now. Reservations are available here. And if you have the means, be sure to stop by and help these chefs out, huh? Times are tough for a lot of folks in the industry right now, and every little bit helps. 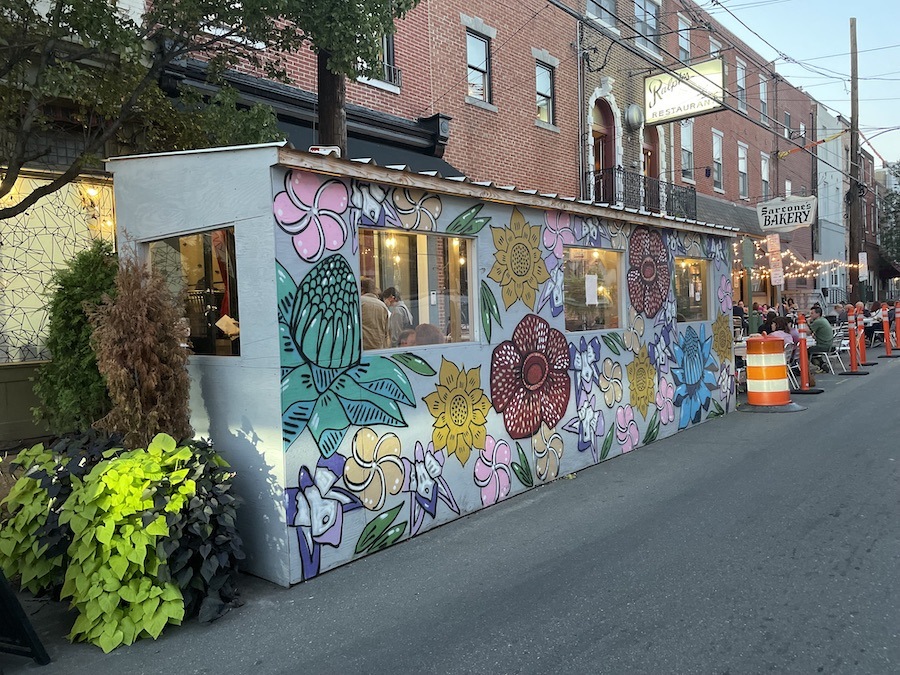 And Speaking of Residencies …

Oh, and while we’re on the topic of residencies, check this out:

Also on Wednesday, October 6th, Kalaya chef and owner, Chutatip “Nok” Suntaranon, is launching her own program — a series of “Artist in Residence” exhibitions which will feature the work of local artists being displayed outside, on the restaurants “streetery” structures, as murals and displayed inside the restaurant itself.

First up is Philly-based artist Tiff Urquhart, who’ll be covering the walls with murals of tropical flowers. She’s also got works hanging inside, and all of those will be for sale.

Here’s Suntaranon, talking about the project:

“When I launched Kalaya in April of 2019 I wanted to make this a beautiful space filled with joy and love. I want Kalaya to be welcoming and warm, even for people just walking by on a nice night. I asked Tiffany to paint the structures because her work is beautiful. Her art reminds her of her time in Thailand, and it’s a perfect way to launch this new initiative which we’ve been really excited to unveil over the past several months.”

The next artist in residence for Kalaya will be Dori Desautel Broudy. Her work will be on display starting in November. 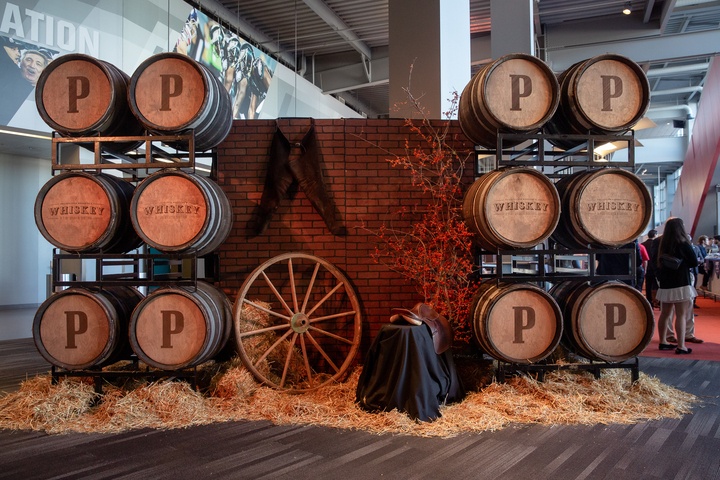 It’s Time for a Drink

Know what else is coming back? Whiskey Fest.

That’s right. The ultimate whiskey and spirits festival is back on Saturday, October 16th this year. It’s happening outdoors, on the first level concourse at Lincoln Financial Field, and it’s being split into two sessions this year — which will make it both more intimate and easier to navigate and safer for everyone involved.

There’ll be over 250 different whiskies and spirits to be sampled, food from some of the top restaurants in town, and the kind of fun that can only be had when you gather all the city’s most dedicated drinkers together and tempt them with bottles of Evan Williams, Buffalo Trace, Blanton’s, Jameson Black, Whistlepig, 16 year-old Lagavulin and the occasional Jager shot.

Tickets are $130 a head, and if past years are any guide, they’re gonna go quick. Plus, even with the two sessions, the numbers are limited this year (for safety). So if you’re interested in sipping your way through a Saturday in October, get your tickets now. And because you’re such a loyal reader, feel free to use the discount code FOOBOOZ for 15 percent off. 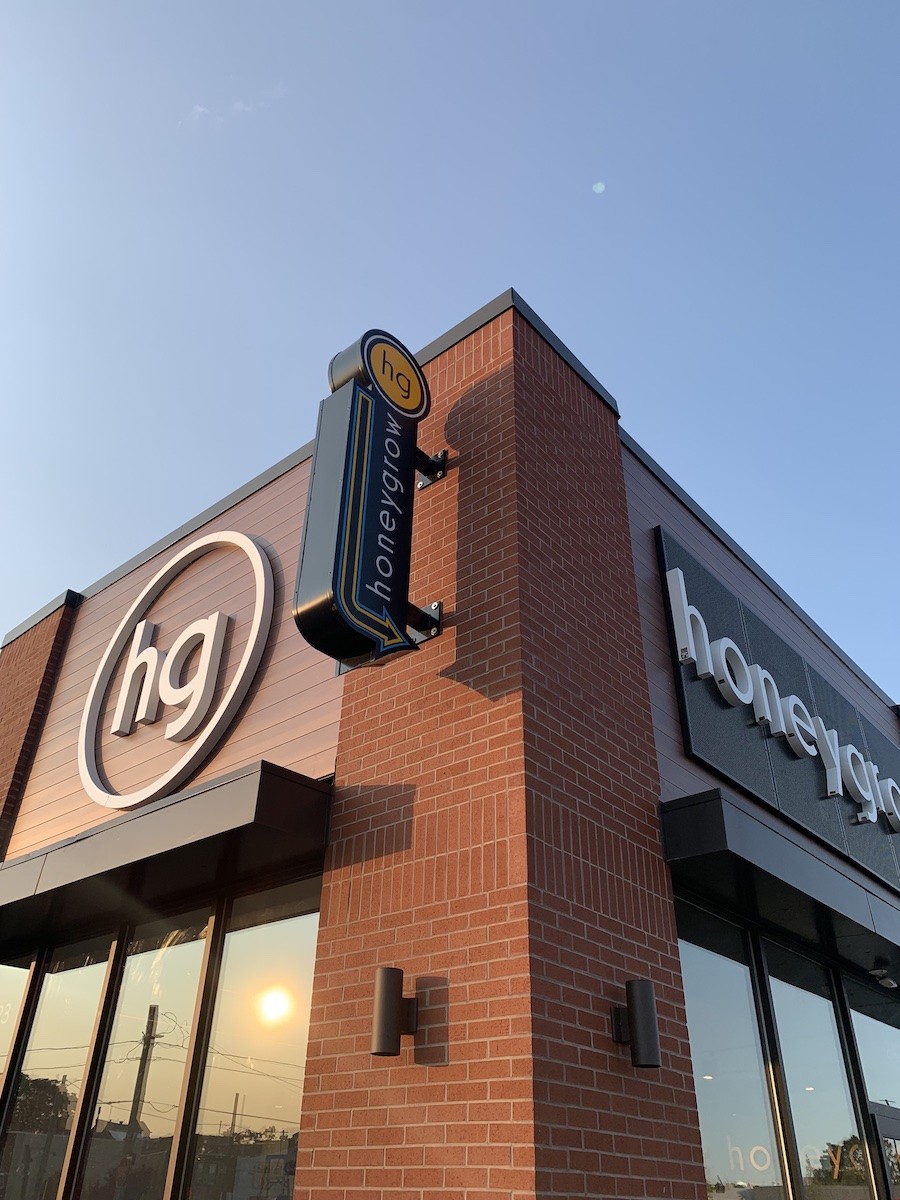 And Now, Let’s See What Else Is Going On Around Town

While Stephen Starr is busy opening his 200-seat zines-and-tacos entertainment complex in Fishtown, someone else is also happy to announce a return to the neighborhood.

Honeygrow spent its formative years with a test kitchen and office space on Front Street in Fishtown. But over the summer, they upped-stakes and lit out for a shiny new address in Center City. The neighbors were disappointed, but Honeygrow has been looking for a chance to get back into the game in Fishtown ever since. Now, they’ve found it, with a brand-new space (the company’s 5th in Philly) at 2423 Aramingo Avenue in Fishtown Crossings.

The grand opening was actually this past Friday, so if you’re in the neighborhood and looking for a fix of Honeygrow’s stir-fry or salads, now you know where to go.

Up in NoLibs, they’re ushering in Spooky Season (god, I hate that term …) with a week-long Bloody Mary contest. They’re calling it “Monster Mash” and the way it works is this: You go to any (or all) of the 16 restaurants participating in the brunch and/or lunch service contest (the full list can be found here), you drink a bunch of Bloody Marys, then you rank each drink in 4 categories: Spice, Taste, Bling and, I shit you not, “Halloween-i-ness” (which I just love, honestly).

Winner gets bragging rights. Participants get tipsy. A fine time is had by all. The Monster Mash Bloody Mary Challenge will run from Saturday, October 9th to Sunday, October 17th. So get drinking, folks. Those cocktails ain’t gonna rank themselves.

Finally this week, out in Ardmore, community-focused coffee shop and bookstore The Story opened its doors on Friday, October 1st. It debuted in the former VFW post at 45 East Lancaster Avenue, and the remodel is pretty impressive. There’s an art installation made out of books, murals on the ceiling, an antique bar and chairs. The whole thing looks kinda dreamy as a place to grab a cup and something to read on a chill November afternoon.

There’ll be simple pastries and baked goods to snack on, the coffee is coming from Sightglass out of San Francisco and Methodical Coffee from Greenville, South Carolina, and the whole thing is being sponsored by the Calvary Chapel of Delaware County, with proceeds from The Story being used to support community organizations in Delaware County and the Greater Philly area. Check ‘em out right here if you’re interested.