I’m Running the Broad Street 10-Miler This Weekend. But I Already Got my Medal. 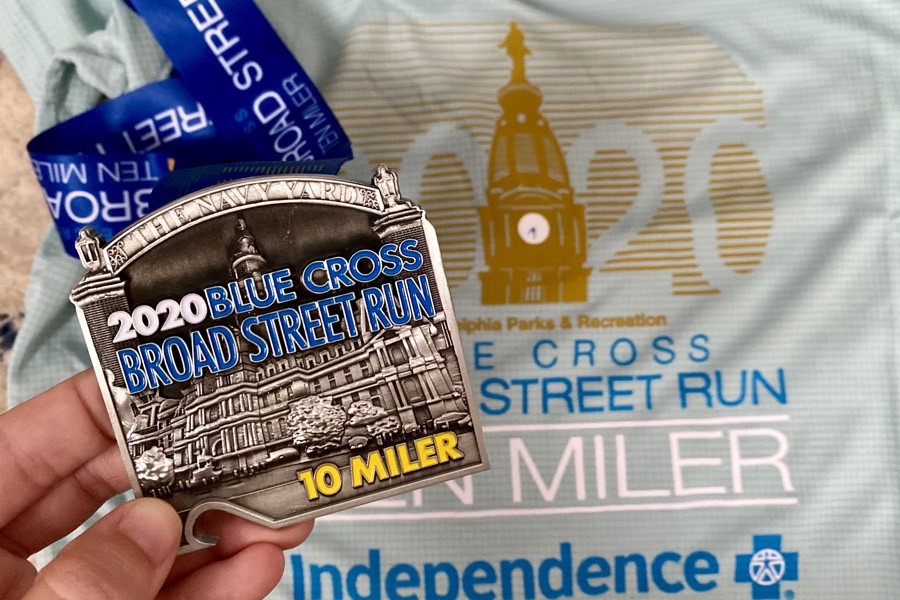 The 2020 Broad Street Run is a virtual run — does that mean it’s really a race? | Photograph by Gina Tomaine.

If you’re a runner in Philly, the Independence Blue Cross Broad Street Run is one of the best days of the year. The race is a Philly specialty with a national rep — it’s the largest 10-mile road race in the country, a fast point-to-point course running from North Philly to the Navy Yard. Around 40,000 people run it every year, and spectators all over the city cheer, hold up ridiculous signs, play guitar, and offer orange slices and bananas (or, you know, illicit shots of brown-bag whiskey and tequila).

But this year, with the threat of COVID-19 spread looming large, the 2020 Broad Street Run, like many other major races, has gone virtual.

When I realized that all of the races would be virtual, my first thought was less than enthusiastic. Okay, so … nothing is happening?

It didn’t naturally compute in my head how a “virtual” race could compete with the thrill of running a road race in a group — the heady feeling of joy and camaraderie among runners, the sensory overload of moving through the city streets, the adrenaline from the crowd cheering us all as we finally near the finish line, sweat-covered and exhausted. And in a way, it still doesn’t — and never will.

But, as Philly adapted to the reality of COVID-19 as a lasting threat, and we all did our best to deal with our new normal, I started, at least partly, changing my mind about virtual races — and I started to see changes in the running community, too. Virtual races started appearing all over, from The Philly 10K “Solo Summer” to the Philly Trail Half Marathon to the virtual Harvest Run, recently launched by City Fit Girls co-founders Takia McClendon and Kiera Smalls.

“I wasn’t the biggest fan of virtual events. I enjoy community, which is why we started City Fit Girls in the first place,” says McClendon. “But I realized that people were signing up for virtual events; they’ve become more popular because they’re the only option. I was reluctant at first, but the response we’ve been getting is extremely positive.” There are some simple ways organizers are creating a sense of community, too. For the Harvest Run, participants can opt for a t-shirt and a training plan — following the plan closely can help increase the feeling of camaraderie. “We’re all doing the same hill repeat on the same day, having the same struggles,” says McClendon. “With everyone following the same training plan, it feels like you’re in it together.”

There are some surprising benefits to virtual events, too: “We wanted to break down some of the barriers to entry that people have with running races. Usually you have to be at the start line at 7 a.m., you have to have transportation to get there, and it costs a lot to run a marathon,” says McClendon. In a virtual run, many of those barriers disappear — not to mention that the Harvest Run and their sponsor Hoka One One, are offering free training plans to runners who are underrepresented in the industry. “It gives us a chance to open this up to people who wouldn’t normally have this experience,” she adds.

Though there are clear upsides to virtual events, the down sides are hard to ignore. “I got lost a bunch of times without a crowd to follow, and missed the support and encouragement — especially after taking a spill,” says local runner Dom Hilton, who just completed the virtual Uberendurancesports Philly Trail Half Marathon. An important point: Running solo “virtually” can be dangerous if you get injured or need medical assistance while on a long run.

The ease of executing a virtual run, too, really depends on the distance — running 26.2 miles requires much more logistical planning and support (nutrition stops, water stops) than a 5K or a 10-miler. “I just ran the Boston Marathon virtually,” says local marathoner Jamie Pschorr. “While I had the best support team on bikes carrying my water and nutrition, I really missed the entire big race experience: Travel, nerves of the starting line, crowds of spectators, the finish.”

“I love that I have a plan I need to stick to and a goal of finishing my first marathon postpartum,” adds Rebecca Barber, founder of the Rocky 50K Fat Ass Run, currently training for the virtual Marine Corps Marathon, “but I hate all of the solo training and the lack of fanfare that will happen with it when I actually ‘race.’”

This feeling — missing the rush of race day— is one almost all runners can relate to this year. Learning to love the virtual run, then, is a facet not of preference (we’d all prefer in-person races) but of adaptability and community. No one wants virtual runs to be the norm, but knowing this is what we can do, Philly is rising to the occasion. We’re doing what we can.

And, despite the many valid doubts about virtual races, it’s helpful to have the accountability of being registered for a race — to know other people are doing it, too, even if not on the same day, or in the same way. In that sense, we get to still feel like part of the larger fitness community which, like McClendon said, is why many of us fell in love with running in the first place. (A community that that is doing its best to keep one another safe and healthy, at that.)

Some runners said they don’t feel that the race still counts — calling the Broad Street Run the “Fraud Street Run.” It’s hard to deny a nagging sense that this race matters less than previous ones. My typical training, and the training of many others, has been off-kilter. I’ve run lower distances with less frequency this year than I normally would have; long runs have become shorter by miles.

There are many reasons for this: because it was hellishly humid this summer, because I’m on a strange and inconsistent routine, because I can’t tear myself away from the glow of my computer screen, because wearing a mask when I can’t social distance can be challenging, and because, like all of us, I’m just stressed out in a pandemic. To boot, there’s not the same pressure of knowing I have a looming race day where tens of thousands of people are going to watch me perform.

So, there’s no denying that when I opened my mail and found my 2020 Broad Street package, it felt weird to suddenly palm a medal for a race I haven’t run yet. Was I somehow cheating? Was this Fraud Street or Broad Street?

Holding my medal and t-shirt was surreal — but also, strangely, motivating as hell. I felt confusion and annoyance at first, but then a swift mental click. A familiar determination set in — one I’d felt when I decided to run certain races before: Okay. Broad Street was still happening. Better get my butt moving.

In many ways, this year has been awful. But, I’ll tell you one thing: Runners didn’t become runners — people who wake up at ungodly hours to push their bodies as far as they will go, who ice and foam-roll stretched calves and hamstrings, who cover themselves with Body Glide and Vaseline to prevent nipple and thigh chafing — because they dislike adversity. Runners are runners for many reasons — but perhaps most of all, because we love rising to a challenge.

Running Broad Street every year is a rite of passage in Philadelphia, for those who are inclined and physically able. It’s become a rite of passage for me. We’ve already lost so much this year. Virtual or not, I don’t want to let this go, too. I want to earn the medal I’m prematurely holding in my hands — a medal I’ve “won” in a year that’s been anything but easy.

2020 Broad Street runners are able to run their virtual 10-miler race anytime from September 12th to October 4th — with October 5th being the last day to submit results.