Yes, You Can Still Exercise Outdoors — But Be Smart About It

Fresh air is good for you, as long as you continue social distancing. 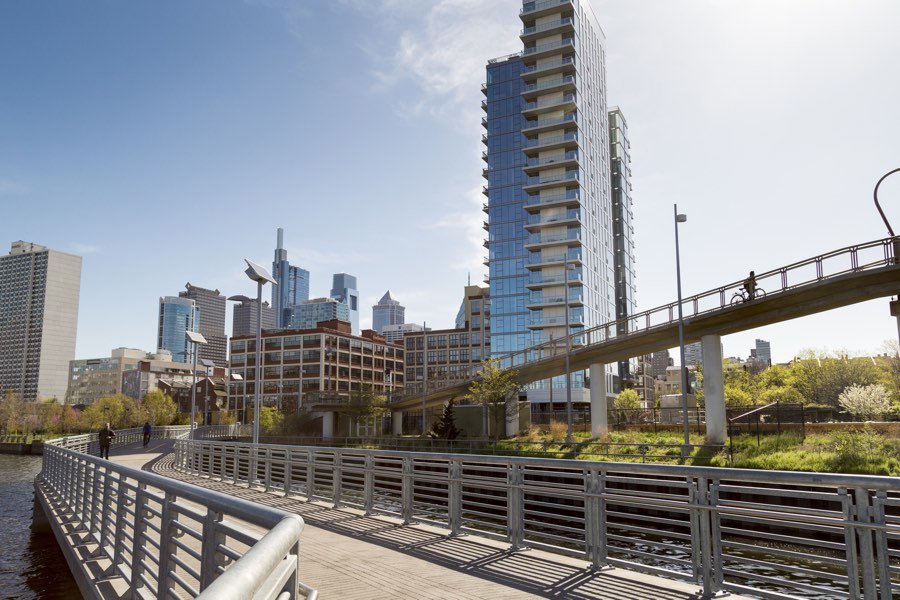 Is it just us, or are Kelly Drive, MLK Drive, and the SRT more crowded than ever, even in the middle of a viral pandemic? Amid the coronavirus crisis, people have, unsurprisingly, been eager to get out of the house and take in some fresh air. And that’s not normally a bad thing. It can, however, be dangerous if people aren’t appropriately social distancing while exercising outdoors.

Philadelphia’s Stay At Home Order dictates that group gatherings are prohibited (yep, that includes group runs). The CDC currently advises remaining at last six feet from others, and this holds for outdoor exercise like running or biking. But is six feet enough? And what else should we be doing to stay safe while getting outside?

To get some answers, we chatted with Dr. David Pegues, a professor of medicine in the division of Infectious Diseases at University of Pennsylvania, and Dr. Peter DeCarlo, a professor of environmental health and engineering who studies air quality and aerosol particles at John Hopkins University, formerly at Drexel University.

Philadelphia magazine: Are open public areas safe to work out in?
Pegues: As long as the density of persons allows you to maintain appropriate social distancing (greater than six feet), public areas should be considered safe. Respiratory droplets generated by coughing, sneezing or shouting loudly are heavy and travel only short distances before falling to the ground. That’s why six feet is the rule of thumb that you should adhere to. Any shared exercise equipment in parks or other public areas, such as exercise stations, should be avoided.

How can we minimize our exposure while exercising outdoors?
DeCarlo: I think people should be getting outside, getting fresh air, getting the health and mental health benefits that provides. There’s a lot of stress to deal with. That being said, we don’t want to expose ourselves or increase our risk of getting coronavirus. There’s a lot of people on the trail running and biking. I think it’s a habit — once people go outside, they gravitate to the trail. Crowded trails can be a potential exposure route for anyone who’s asymptomatic and shedding these virus aerosols. But, as long as you’re not running or biking right behind someone at closer than six feet, or walking behind someone for extended periods of time, you’re not going to be be breathing their exhaled air too much, so your exposure is going to be low. The longer you spend right behind them, in their wake, the more exposure you’re getting to what they’re breathing out. If you want to completely minimize your exposure, stay as far away from everyone as far as possible, but that’s not practical.

Are there other things people can do to protect themselves outside?
Pegues: Seek out less crowded times of day to be outside and exercise. Seek out less crowded areas, like some public parks, streets, and sections of trails.  Clean your hands with alcohol hand rub or soap and water after contacting “high-touch objects” like door handles, gates, and restrooms.

Is there a risk of the virus remaining in the air?
DeCarlo: Things do dilute outdoors more quickly than indoors. The smoking analogy I think is a good one to help conceptualize — so you can think of someone smoking. When you’re outside and you take in someone’s cigarette smoke, it’s a puff or a wisp. You can smell it and yeah, it’s annoying, but temporary. But where a lot of the transmission occurs is really indoor exposure. If we extend that smoking analogy, then yes, outside walking, you might catch a whiff of someone’s cigarette. But if someone’s smoking in the same room that you’re in indoors, you’re not just catching a whiff. You’re breathing it in with every breath.

So indoor spaces are still a bigger risk than outdoor spaces?
DeCarlo: Yes. The shared indoor spaces that are not our home are the ones we have to be most careful about — when we have to do that grocery store run, or go pick up some medicine from the pharmacy. Those are the places where the air is trapped. If someone indoors is asymptomatic, or maybe they do have symptoms, and they’re filling that air with viral particles, that’s where our biggest exposures are going to be. I try to minimize the time I spend in a grocery store. I want to be in and out as fast as possible. And, I’m going to do it at hours where there won’t be many people, whether that be early in the morning or later in the evening.

Any other advice you would offer for people?
DeCarlo: Don’t congregate. You know, anytime you’re getting together with people, even at a distance, is probably a bad idea – other than the people you live with, at least for the foreseeable future.  I think the six-foot rule is generally decent guidance, but it’s not a hard and fast assurance you won’t get sick. Keep as much distance as possible.